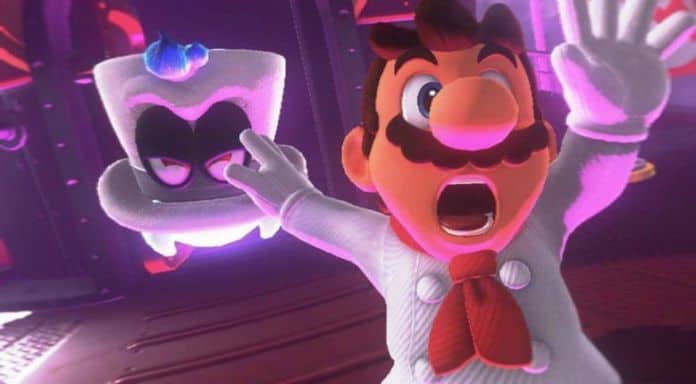 Gaming outlets, and fans, have spoken and Super Mario Odyssey is a 10 (or high 9) across the board. Here at Nerd Much we’re no exception. The consensus is clear; this game is brilliant. But that doesn’t mean there aren’t a few dull spots on this gem.

Here’s why Super Mario Odyssey is just a tad overrated:

A Little Too Linear

During the main campaign you can get as many moons as you want but you’re still locked in because kingdoms have a mandatory minimum number of moons. Apparently, the Odyssey crash lands beyond repair… often. You need the moons to fix your ship. While this is a smart way to weave in linear mandates (i.e the developer needs you to do X in order for you to see Y) with the story. However, it happens a few too many times.

To its credit, Super Mario Odyssey succeeds in creating an untethered adventure in other ways. I love the ability to go from moon to moon without ever being taken out of the world and you can collect the moons in any order. But travel itself, unfortunately, triggers restrictions in Odyssey. 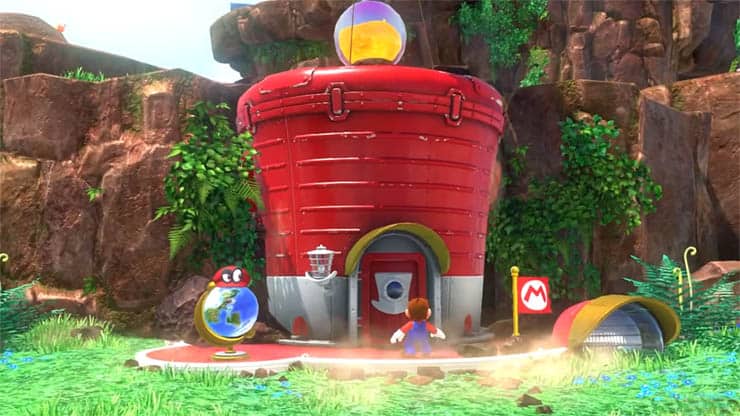 I distinctly remember fixing my ship at the Lost Kingdom and entering it to change my outfit. But doing so caused me to unknowingly take flight to the next area. I wasn’t done with the Lost Kingdom but when I got to Metro Kingdom my ship was wrecked once again. It was impossible to go back to the Lost Kingdom until I got enough moons to repair my ship. I still haven’t gone back to be honest. 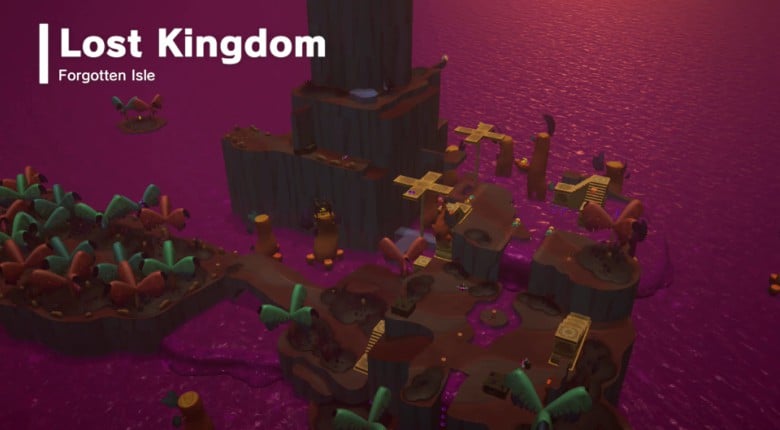 It was just discouraging. I had plans to take my time in each kingdom, move on, and continue moving forward until the campaign was complete. So once I was done in New Donk City (aka Metro Kingdom) I figured I might as well keep moving forward in the narrative.

Some of you may be reading this and scoffing at my own refusal to return after the fact, but my point is elements like that kill the adventure vibe for me. It takes me out of it even more than when Super Mario 64 would literally take me out of a painting.

Allow me to preference this by admitting to you, dear reader, that I am a total wuss with a few elements of noob regarding boss battles. I’ve gotten better about it now that I’m not a literal child but god, I suck at boss battles. I’m an adventurer and a puzzle solver, not a fighter. So I’m totally okay with my boss battle being easy. The easier the better! And yet, Super Mario Odyssey’s boss battles don’t sit well with me.

Facing Bowser could be better but those battles are pretty memorable. We get the charm of the hat mechanic being used, we get the classic earthquake rings of fire to avoid, and we even get the vintage tail swipe. 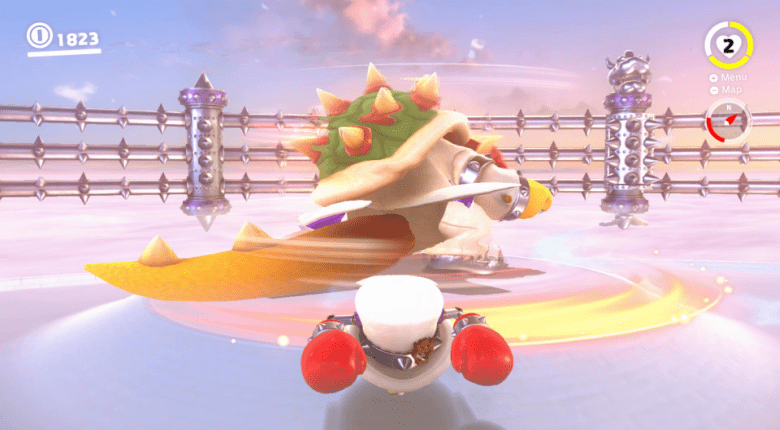 Plus we get to walk up and just punch the hell out of Bowser, something I’ve been wanting to do for quite some time. Fighting Bowser is fun but it also feels like a grandiose event–which is exactly what I want from my boss encounters.

Other places where the bosses shine are when we get to face large enemies like the Bird at Luncheon Kingdom. 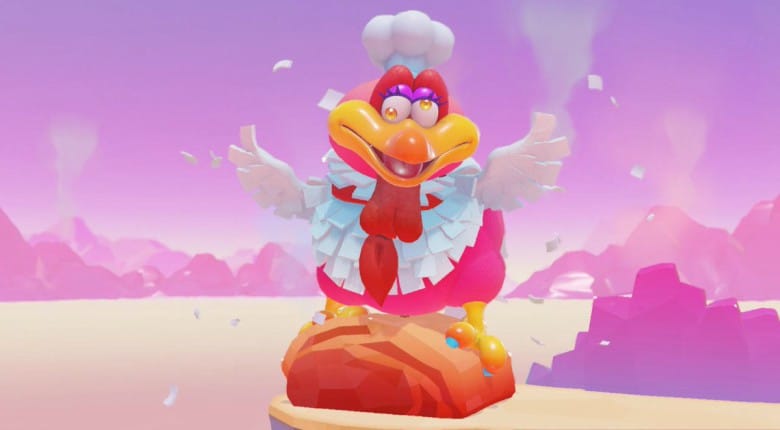 While this boss is a bit too easy, it’s a joy to battle. The whole circumstance of capturing a slab of meat so you can be carried off by a giant bird with a ridiculous name, Cookatiel, only to do battle in a large bowl of soup is wonderful. If you’re not enjoying that experience, seriously, who hurt you?

Unfortunately, the same can’t be said about the main recurring bosses: The Broodals, Bowser’s evil wedding planners. First of all, if they’re wedding planners shouldn’t their attacks reflect that a bit more? What does spewing poison out of your mouth has to do with planning a wedding? 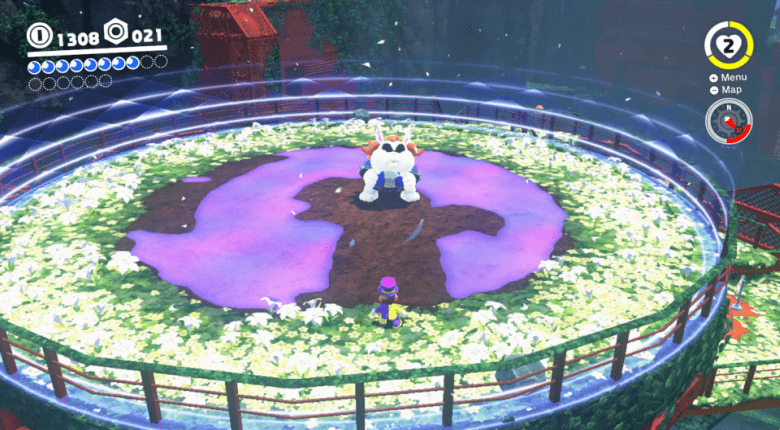 But most importantly, these bosses are both easy and uninspired—a lethal combination. There are ways to have easy battles that are still fun but Odyssey mainly opts to give players patronizing chores. Worst of all, we have to fight the Broodals multiple times. Their attacks are “more advanced” each time but honestly these supposed increases in rigor are really just a hat on a hat. And, in the case of, Madame Broode, it’s literally a hat on a hat: 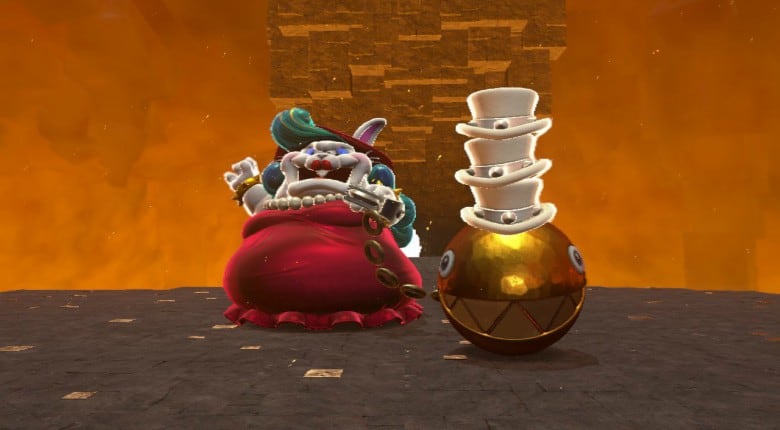 Maybe I’m just bad at swimming but I can never really get into a groove with this mechanic. Too often I end up ground pounding myself into spikes or having some other unfortunate event occur. Luckily you can always capture a cheep cheep and that makes swimming a far more enjoyable experience. Other than that, I’m keeping this ex-plumber out of the water as much as possible.

I spent my week playing the Super Mario Odyssey campaign really worried this ending would be spoiled for me; people were really hyping it up. All I kept hearing and reading was “ugh, wow. What an ending.” I spent the whole game like “ooo, what could it be? I hope it’s not something basic and predictable like Peach brushing off Mario completely.” 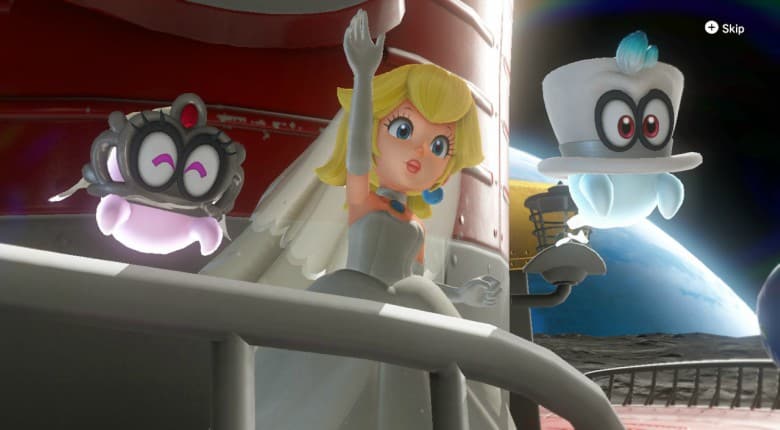 Perhaps it’s a little unfair of me… after all, it’s not the team’s fault that people hyped up the ending but I can’t help but be disappointed by it. I’m all for independent women and the subversion of the damsel in distress trope but literally the entire game Peach was calling out for Mario. Now that he’s actually here all she has to say is  “boy, bye.” Like, that would be cool if the entire game wasn’t predicated on the opposite sentiment.

You can’t just tack on a “progressive” ending in an attempt to give this sloppy story closure.

What exactly is happening here? The ending shows Bowser and Mario shoving each other and presenting Peach with flowers in an attempt to win her over. I thought Bowser was a kidnapper here? Why would she even consider him to begin with? 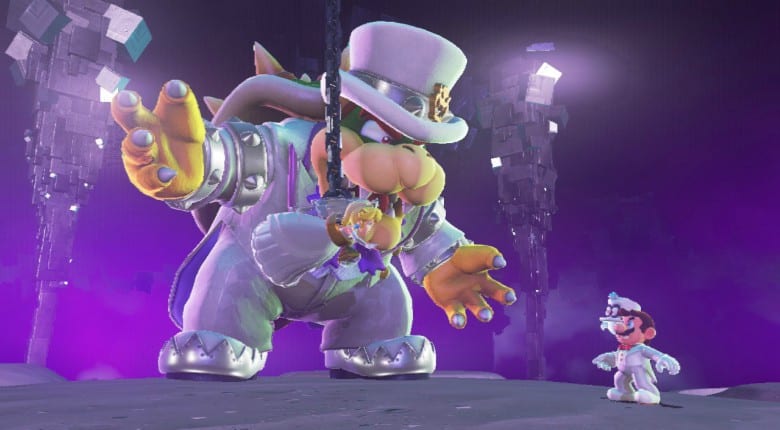 That’s not the narrative we were given. Plus, upon both of them being rejected we see Mario patting Bowser on the back in solidarity. I thought you two were enemies. 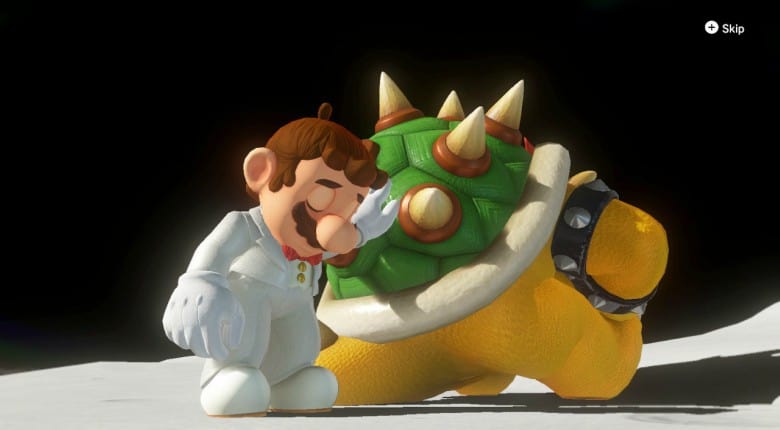 Plus, what’s with the Tiara that was stolen? Aka Cappy’s sister Tiara. Wouldn’t the sister be just about as powerful as Cappy? Cappy isn’t pitched to us as having powers others in the cap kingdom don’t have so why wouldn’t his sister just handle things herself. 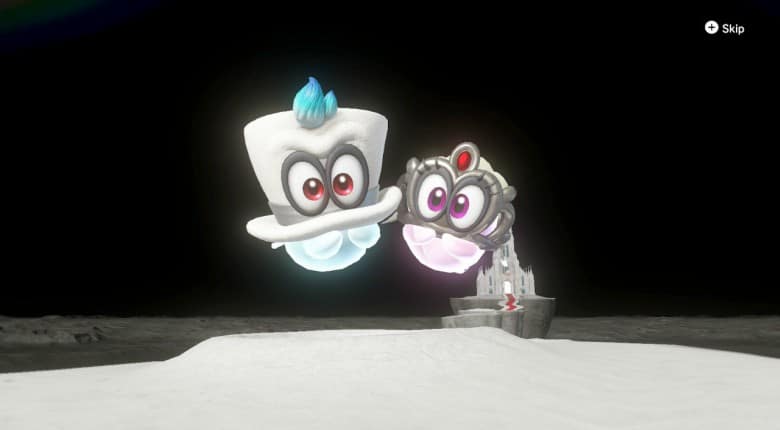 Also, I figured the tiara was being used to manipulate or control peach in some way but nope, it’s purely for aesthetics and to give Cappy a reason to give a sh*t I guess.

Alright, Nintendo… but hey, I’ve never been here for the story so I guess I should stop complaining and head into the post-game with everyone else.

But before I do that let me point out a few, final, small things that irk me.

Glancing at the Odyssey itself can reveal your grand total but the menu only shows how many moons you have in a given location. Grand total, please.

Not being able to change whenever you want

Currently, you can only change your outfit using the closet in the Odyssey or the closet in Crazy Cap. This isn’t too limiting but when the Odyssey needs repairs you can’t go inside of it. Additionally, you can’t change your outfit once a cutscene is triggered. This is intended to create a more immersive experience but it can lead to some moments of inappropriate dress. If I had known I’d be seeing Bowser today I would’ve changed first you know… 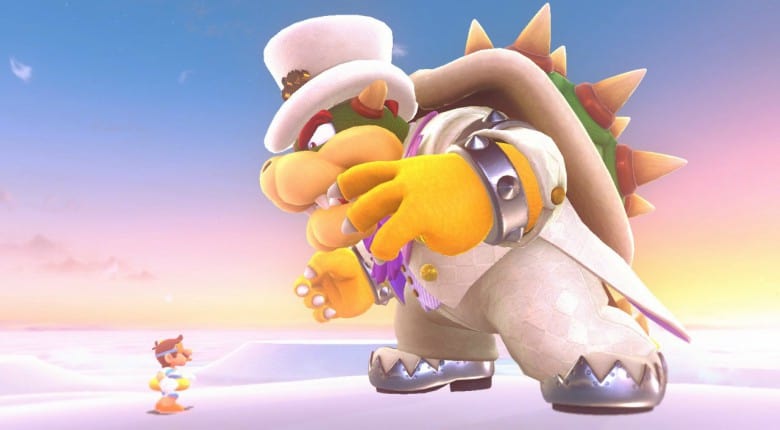 What does the jump rope challenge really prove? Collecting moons is about adventure and ingenuity, but these are just annoying shovelwear challenges. 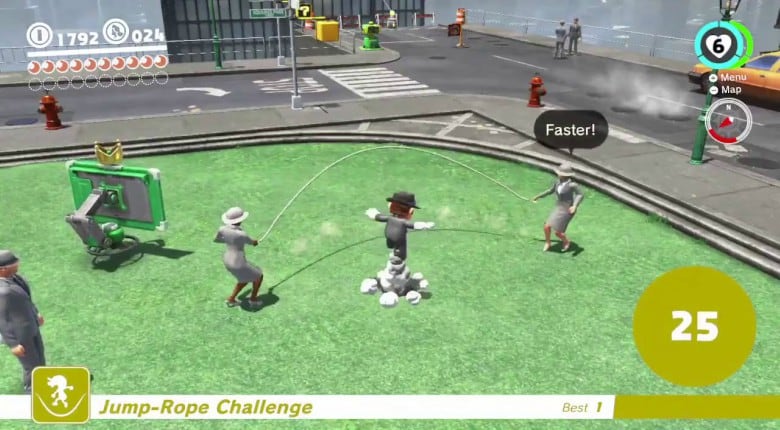 All of this is to say Super Mario Odyssey may be an impressive piece of work in an iconic series but it’s not without its flaws. Let us know which ones you agree/disagree with and what you’d like to this list.

Previous articleWhat Video Games Tell Us About Police Brutality & Our Perception of Each Other
Next articleMagic: Legends: Everything We Know (So Far)