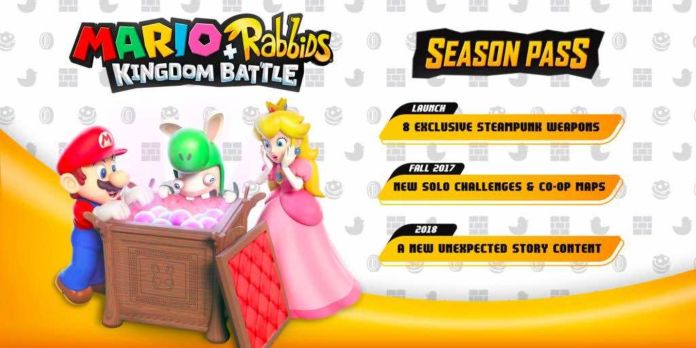 After the release of the season pass for The Legend of Zelda: Breath of the Wild, it shouldn’t be surprising that Nintendo is dipping into that cash pool once again with Mario + Rabbids Kingdom Battle. Not that Nintendo or Ubisoft need it, but here we are. That said, Ubisoft appears to be far more deft at handling the marketing for the game, as this season pass sounds like something fans would be willing to put money towards with exciting new items and even some mysterious story content. 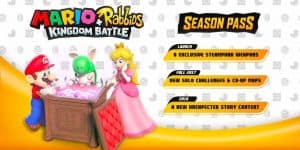 The season pass, according to Ubisoft’s senior communications manager Giancarlo Varanini, includes 8 exclusive steampunk-themed weapons for all playable characters at launch, then later sometime in the fall of this year, you will receive “new solo challenges and co-op maps.”

Nothing quite like being able to include your friends in the game, especially with a system like the Nintendo Switch. The final content batch for the season pass is expected to come in 2018 (again, no specific date yet) and will be “unexpected story content.”

“Unexpected,” despite season passes usually including DLCs of some kind, even if they are just bonus content, like small extra quests or such that can be played in under an hour. Nonetheless, perhaps we’ll see more characters added to the game from other Nintendo franchises, like Zelda or even Splatoon. Though adding Splatoon-themed Rabbids might be a little much, even for a game as comedic as Mario + Rabbids Kingdom Battle. The “unexpected” content could also come with missions or a special difficulty mode that most Nintendo games are so famous for.

If any of that speculation sounds interesting to you, the season pass, according to Varanini is priced as $19.99 USD and can be purchased over at the Nintendo eShop.