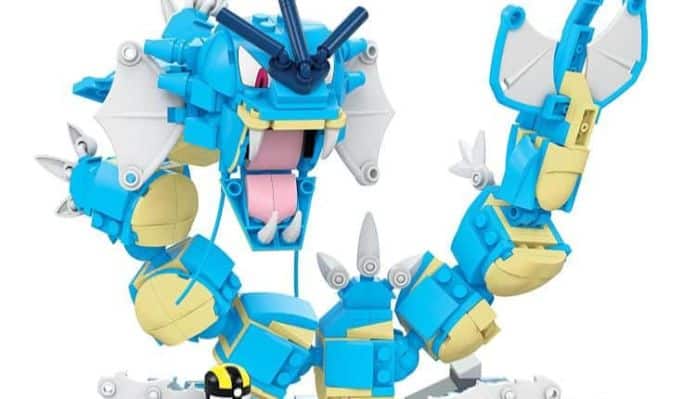 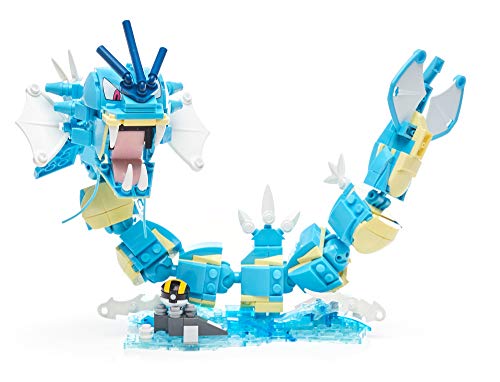 If you have a friend that won’t quit playing Pokémon Go long enough to drive without your assistance, this Mega Construx Pokemon Gyarados Building Set is the perfect gift. No one is ever too old for Mega Blocks. Building and creating something you love, like a Gyarados, can feel awesome regardless of your age.

The Mega Construx Pokemon Gyarados Building Set contains one Gyarados with a fully articulated body (for numerous poses and attacks), an Ultra Ball, and a display stand that acts as a environmental set as well. The figure it 9 inches long, making the Pokemon a large build in comparison to some similar pieces. there are 352 pieces in total, so be sure to keep them somewhere you won’t lose them.

This Gyarados looks very accurate to the model in the games. The majority of its body is blue and serpent-like. The figure also has large fangs to look especially threatening to any enemy Pokemon. The display piece is large piece of clear blue, to depict water, with a small grey stand especially for the Ultra Ball.

The recommended age, due to the aforementioned small parts, is 8 – 12 years, but don’t let the age range stop you if you happen to be outside of it. Whether or not you play with this Gyarados, he looks fierce and would make a fine addition to any collection.

That said, there are many more Pokemon in the Mega Construx line, including Charizard (wings and all), Pikachu and Bulbasaur set (plus tree for ultimate realism), and a Squirrel and Charmander set (with attack pieces that can be attached to their arms). The prices range from $14.99 to 29.99 USD, depending on which set you prefer. Some of the smaller ones might be even cheaper.

The Mega Construx Pokemon Gyarados Building Set is sure to be a great gift for any Pokemon fan, especially those that can’t seem to stop catching Pokemon on the go. On your phone or Nintendo 3DS, you’ll always be able to take Pokemon everywhere.