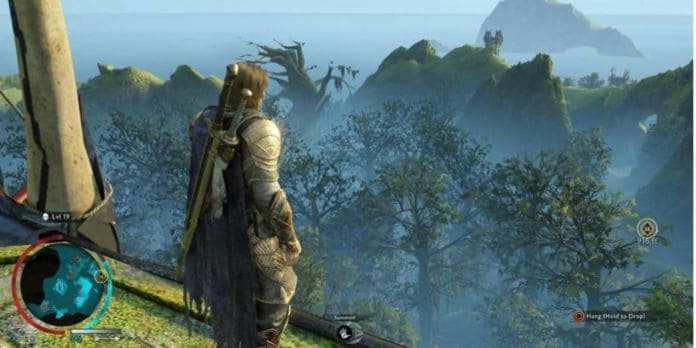 **A Middle-earth: Shadow of War review code was provided**

You begin Middle-earth: Shadow of War in the middle of a siege, and it actually feels like one. What as once a beautiful city, is crawling with orcs. Getting from point A to point B have never been more difficult.

Even when you sprint your way across the streets and buildings, you will get damaged and at least thee Captains will pick a battle with you. The Captains and orcs are there to interrupt you for a reason: practice. Depending on how much challenge you enjoy in your combat, Minas Ithil is the place to grind and slaughter your way through Captains before it matters. 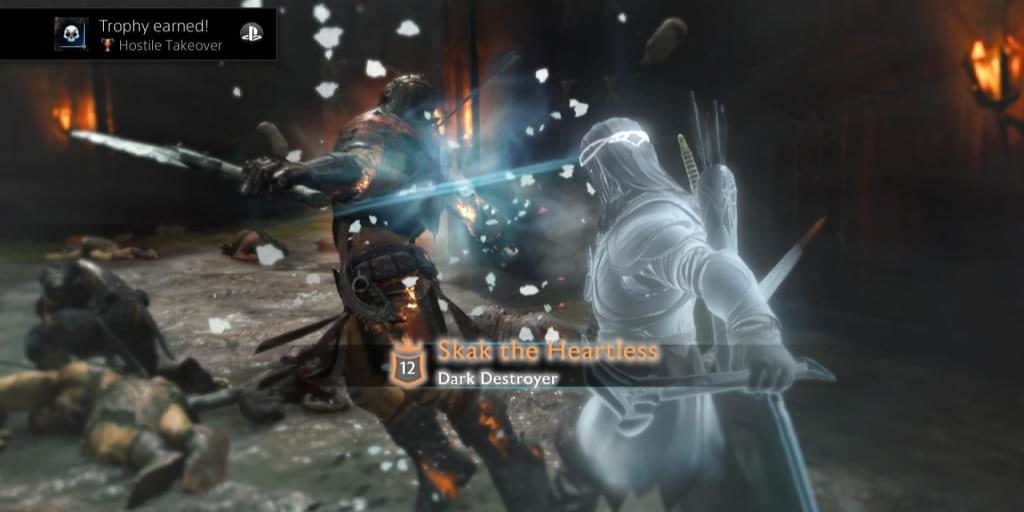 As such, the combat of Shadow of War is as challenging as The Witcher 3. You have three basic moves and plenty of special attacks to choose from. Instead of Aard, Celebrimbor sends out Elven Light that stuns everyone close enough. I found the combat of this game just challenging enough that I still died plenty of times (a curse upon javelins) and easy enough to feel badass.

Not all gameplay is created equal, as this “practice” period lasts from Mina Ithil to Cirith Ungol. That’s one region too much, in my opinion. That you are not able to access the full Nemesis System until the second act of the game is contrived and pointless. The learning curve is overwhelming for first-time players regardless, but I feel they lingers too long on making sure the player has combat ironed out.

That said, let’s get into the Nemesis system. It is the highlight of the game to be sure. Dying levels up the enemy that killed you, and once you can dominate Captains, more challenges await: you must assemble and train your own army, carefully levelling them up as needed; each domination move gives you the option of sending Death Threats, which might get you better loot but the Captain you threaten will be significantly harder to kill.

There are plenty of ways to make the game more challenging that you can tailor to your specific play style. I found this to be a very welcome feature as I was never forced to play in a way I wasn’t used to unless I wanted to. As a small note, I did not find any technical difficulties in the controls or pace of the combat.

Graphics are different story, however. The textures are great, as is most detail, but hair animation could use a revamp. The hair for the main characters, especially Talion and Idril, looked like they were made using a Kid Pix brush tool.

You know the one, with five dots in a line. If that wasn’t distracting enough, viewing the backs of heads was cringe worthy. The groups of five lines, made by the aforementioned tool, were spaced too far apart, so we got to see a lot of scalp when someone turned their head away.

Again, just about everything else is find, some cutting glitches, but nothing as distracting as that hair. Talion is another story. Not only are his hair animations atrocious, his facial expressions are about as diverse as Darth Vader’s. Everyone else shines in comparison, even Shelob, who at least has three more expressions than Talion’s “sad” and “angry.”

Design-wise, however, Shadow of War looks great. After the two tutorial areas, the world opens up to far more diverse landscapes. All much more pleasant to look at than grey cave wall number 6, no matter how well detailed. Character design is distinct and beautifully done, especially the huge cast of orcs. Each orc captain is sharply unique and it takes a long time before you start getting repeats.

Speaking of orcs, let’s talk about the voice work in this game. I won’t claim that each captain you meet has a different voice actor, but they sure have their own personalities. Helped along by their unique appearance, each Captain have their own phrases when greeting you and during combat. Some of them are stock “rwar, I’m gonna kill you” but others are sun, rambled, rhymed, and at one point I was accused of being racist against orcs.

Even when you’re hanging out in tall bushes, you could listen to the lesser orcs talk for hours. Their conversation is not just “would you like to go for a drink later” it is plot relevant conversation. If they aren’t talking about how scary you are, they talk about their captains, overlords, and even Sauron. They talk about what is going on in the game, and I find that very humanizing and immersive.

The other main characters are equally well voiced, though Talion falls short again. Celebrimbor is equipped with plenty of sardonic and hilarious commentary to Talion’s actions. All supporting characters truly put their all into this one, top Hollywood quality here. Except Talion. He has some intonations at least, but he sounds about as tired as I feel listening to him.

The music, however, is entirely atmospheric. If I hear it at all, it’s the occasional trumpet and french horn. Such instruments are overused in this soundtrack, like someone tried to emulate Howard Shore and feel short an orchestra. Seriously, violins are what made that soundtrack, not the horns. That said, the music isn’t jarring but it suits Talion’s bland character.

The environmental audio is good, not much to say here. One thing that stood out to me is the sound of a successful counter attack. I noticed that there is actually a different sound when the orcs are using wooden weapons instead of the usual cleaver and sword. It sounds like your sword is hitting wood. I found that to be a clever little detail. 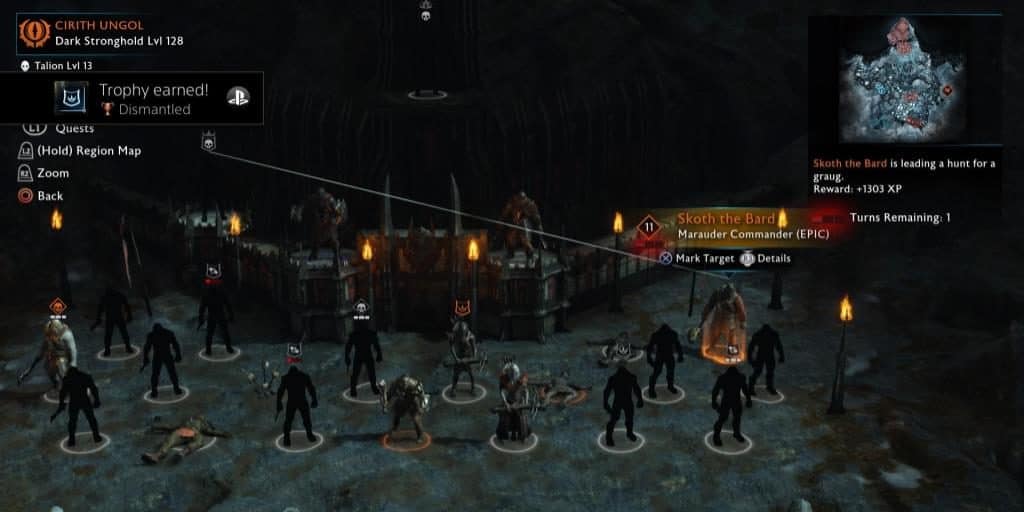 The story goes that Celebrimbor and Talion decided it would be cute to forge a new ring to defeat Sauron. Shelob steals it because she can, then she gives it back. With the ring, you amass your army and attempt to save Middle-earth.

The Middle-earth games, as you can probably tell, have absolutely no place in the canon of The Lord of the Rings. This is a very unfortunate fact, especially when Celebrimdor’s history with Sauron is significantly more interesting than the one they wrote in the game. I don’t know why they changed it, it would make Celebrimbor’s motivations a lot more understandable and relatable. Certainly more so than Talion’s.

That said, Celebrimbor is still my favorite character in Shadow of War. He’s cynical, sarcastic, and gives absolutely no f*cks about the fall of human empires. His attitude is refreshing and welcome, especially when contrasted with Talion’s blank but bleeding heart. 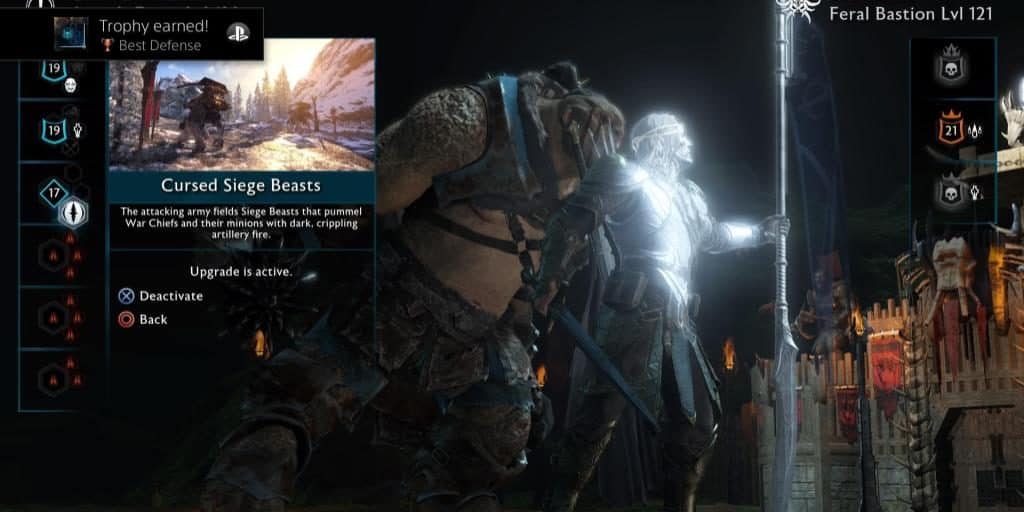 I’ve never heard someone care so much so dispassionately before. Talion is only slightly less bland than flavorless oatmeal. I get that they wanted a character the player could insert themselves into, but it wouldn’t kill Talion to feel more than sad and angry. As such, nearly everyone else stands out. With the aforementioned great voice work, even the orcs are far more interesting than Talion.

Save for Talion, the characters and story are what make this game worth playing. If you could care less about that, than the Nemesis system is sure to win your heart. The tailored difficulty is fun and always interesting. I never felt bored, even when I was grinding. In addition, the sheer scope of this game’s world provides hours and hours of entertainment. All of which puts this game at a 9/10.