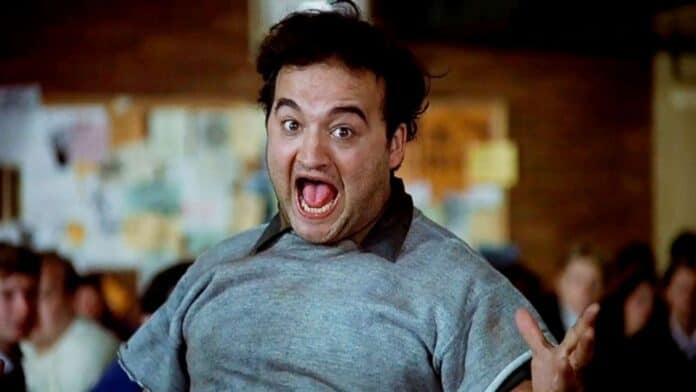 Autumn is the time when most students try to start studying. In most cases, they fail to do that from the first attempt. After that, they frequently feel the need to have some more rest.

Here is my plan: I’ve found the pros to solve my math homework and to type my essay for me beforehand, and now I’m about to watch some cool movies about dorm life and being a student.

Below, you’ll find my top 5 favorite studentship films, featuring totally different types of pictures in terms of their genres and release dates. You’ll find everything from a classic 1970s comedy to a relatively new cartoon and a serious drama.

Animal House was a pioneer of the studentship party movie subgenre, depicting the party-side of dorm life. The film released in 1978, and it created John Belushi’s rise to stardom.

The phrase “National Lampoon” in its title is neither a studio nor a director’s name. It was the title of a revolutionary American humor magazine that was on the rise in the 1970s. Back then, those two words mentioned meant the top quality thing. No wonder the movie about two rivaling brotherhoods gathered a huge bank regardless of its tiny budget.

The director of Animal House was Max Landis’s father, John Landis, who became the eternal member of a metaphoric comedy history glory hall after that. Ivan Reitman became one of its producers. One of the screenwriters was the National Lampoon author Chris Miller who got inspired by his own experience and adventures.

In fact, Animal House was the first to invent the entire structure of “Toga party!” movies, and that humor cliché. Although there have been many mega party movies since, Animal Party remains the creme de la creme. Simply put, it’s a classic.

A naïve but inspiring story about the strength of progressive viewpoints and creeds. A young teacher Ann Watson starts working at the Wellesley Art College, and then finds out local conservative traditions not to correlate with her idealism. Instead of inspiring her female students for great deeds, she is made to support the patriarchal idea of marriage standing above education.

Despite their noticeable talents, her students keep up with the same idea, but the 1950’s are passing by. Thanks to the efforts put by Miss Watson, students start accepting the thought of women having not less talents than men, and obtaining the right to be independent and to follow their dreams. “Mona Lisa Smile” is like a Christmas tale of feminism that gathered together such stars as Julia Roberts, Kirsten Dunst, Julia Stiles, and Maggie Gyllenhaal.

Another movie about the strength of female friendship paired with studying and belief in oneself. Despite all the chances Pitch Perfect had to become just another movie about college friends, it maneuvered around the genre pitfalls rather nicely. In fact, it even earned a sequel.

The film follows a group of female students who gathers the ole’ acapella group to compete with other colleges. The women are able to sing well and clean, but it’s about a bit more than just that. It is about all the accompanying things: a heroine played by Anna Kendrick, the hilarious Rebel Wilson, and great jokes.

(Note: I instantly found a guy to do my homework cheap after watching the first Pitch Perfect trailer I saw on YouTube. I just had to watch it, and it was definitely worth the time I saved to watch the complete film).

This is the Monsters, Inc. prequel about Mike and Sulley. They don’t like each other as students, but then the rivalry gives birth to the strongest friendship ever. Monsters University follows Mike, a regular guy following his dream despite not having natural talents and appearance, and Sulley, who is a perfect first-year student belonging to a prestigious group and a descendant of noble blood in the world of professional scarers.

They don’t yet know about a child’s laughter to be more powerful than any scream and go to college to learn how to be really scary. This story doesn’t have the typical happy ending. Instead, the authors picked a much more modern idea: you can become successful without graduating from the prestigious college. If that is what you want, feel free to choose your own way, which is bound to be complicated but equally valuable.

A soul-saving drama by Denzel Washington set in The Great Depression and lynching times. Washington himself played the role of a brave teacher in the traditionally African American college of Wiley in Texas, who invited participants to his debating club.

The Great Debaters is based on a biographic story of Melvin Tolson, who had been teaching public speaking and discussion mastery in the 1930s. His team consisting only of African American students was the first to win the national competition by outplaying the undisputed leader.

The Great Debaters reminds of the power of spoken word, actually able to move mountains. It’s an important idea that modern education frequently tends to lose.