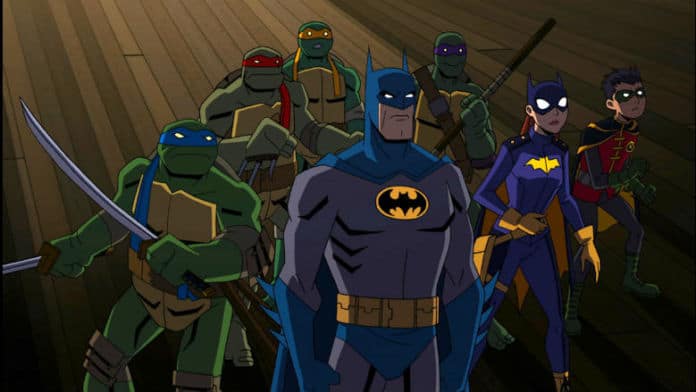 In late 2015 and early 2016, worlds collided when DC Comics and IDW Publishing joined forces to produce Batman/Teenage Mutant Ninja Turtles. The result was a six-issue crossover comic that made every little kid’s dreams come true. Now, Warner Bros. has revealed that a Batman Teenage Mutant Ninja Turtles animated movie is in the works which will bring the pages to screen.

The story of the Batman Teenage Mutant Ninja Turtles animated movie will revolve around the same beats as the comic miniseries written by James Tynion IV and Freddie Williams II. The project will see Batman meeting the Turtles (with a conflict initially, of course) before the plot sees them teaming up to take on many of Batman’s most iconic foes.

If news of the Batman Teenage Mutant Ninja Turtles animated movie wasn’t awesome enough, the list of voice talent involved will certainly blow you away. Troy Baker is attached to play the roles of both Batman and the Joker. Syfy, who broke the news, notes that Baker is “the first actor ever to take on both roles in one project.”

As for the Turtles, Darren Criss is Raphael, Kyle Mooney voices Michelangelo, Baron Vaughn plays Donatello and Eric Bauza is our Leonardo. Batgirl is included too with Rachel Bloom taking on the role.

As for the villains, SpongeBob himself, Tom Kenny, will portray the Penguin. The legendary John DiMaggio is Mr. Freeze. Carlos Alazraqui will play Bane and Cas Anvar is Ra’s al Ghul. The bad guys are rounded out by the female duo of Harley Quinn and Poison Ivy, both voiced by Tara Strong.

The wait for the Batman Teenage Mutant Ninja Turtles animated movie doesn’t appear to be long. Warner Bros. plans to release the movie via 4K Blu-ray and digital outlets late this spring. My 10 (and 33) year old self can’t wait.