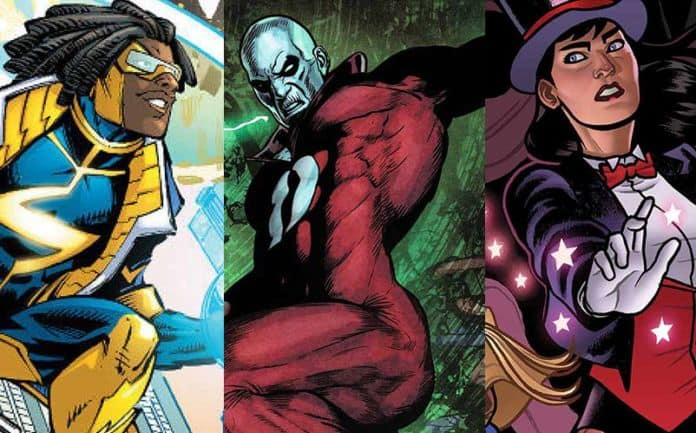 DC movies have had a tough go of things lately, haven’t they? The majority of films that have come out on the DC side of things have been lackluster or even downright bad.

Warner Bros. has already announced the DC movie lineup up through 2024, though we could see changes in the future.

With a large roster of characters DC comics has, it’s likely we will be introduced to other heroes in these films as well. There are many superheroes that haven’t appeared in films, and we would love to see new faces as this movie universe evolves.

This list is made up of superheroes that may not star in their own solo film but should be included in the DC film universe in some fashion. Here are 10 DC movies we actually want to see: 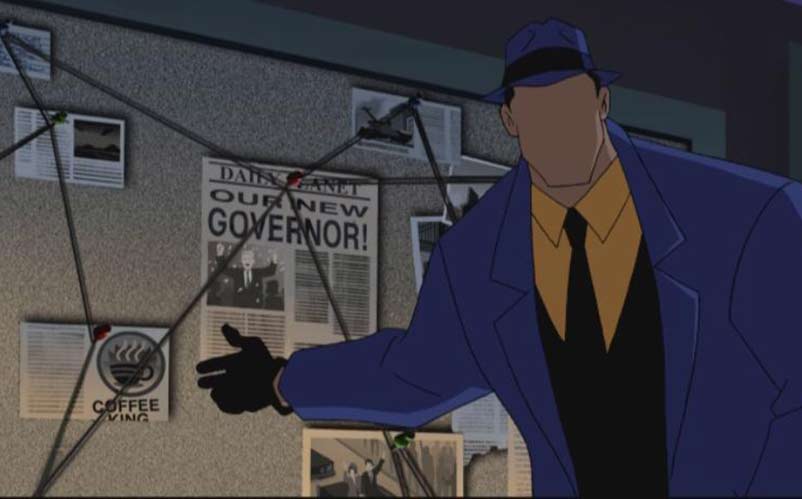 There have been a few iterations of The Question that lead to many possible choices for a film adaptation. Originally, the hero’s identity was Vic Sage, who has had stints as an investigative journalist, a martial artist, and the leader of the Suicide Squad. The Question was also, for a time, Renee Montoya of Gotham City Police fame.

Though this hero has had mystical abilities, he was originally without superpowers, and depended on his investigative skills. The mask donned by The Question would be an interesting effect on the big screen because of its morphing properties that make the wearer appear faceless. This may be a questionable hero to bring into the DC movie universe, but we hope The Question makes an appearance at some point. 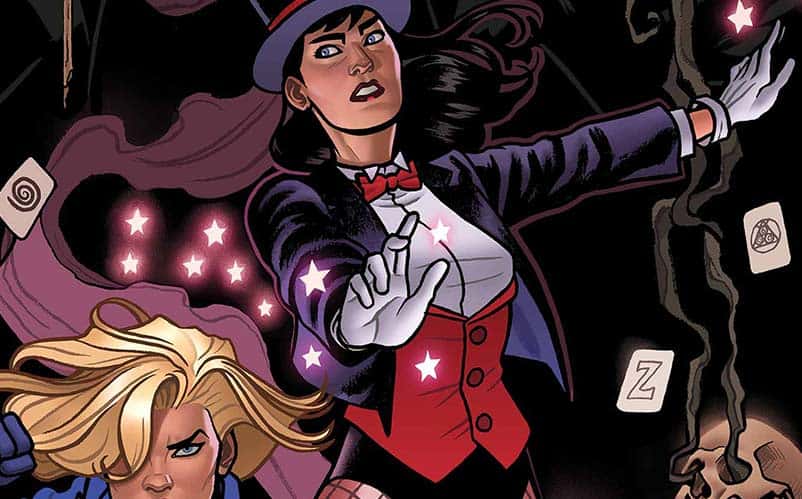 There are few spell-casting superheroes as tough as Zatanna. She has held her own alongside Hawkman, Batman, and even the Justice League. Zatanna’s natural magical abilities flow through her blood, and in turn, make her one of the most powerful sorceresses in the long roster of DC heroes.

Her strength and unique relationships with many heroes makes Zatanna a perfect fit for a movie. If Warner Bros. introduces magic into the DC universe, she would be a fantastic choice to represent spellcasters, and with Superman’s weakness towards magic, Zatanna could be a strong stand-in for the Man of Steel. 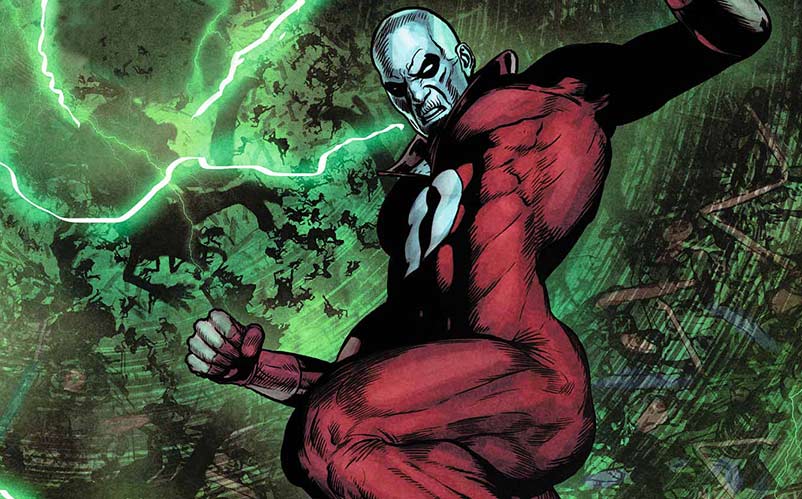 Boston Brand aka Deadman is a strange character that could bring a very different perspective into the DC movie universe. Firstly, he is a ghost and unlike Ghost Rider, Deadman can possess any living creature (and he doesn’t drive a motorcycle). His ability may be difficult to bring to life on the big screen, but it would be a very interesting plot mechanic if utilized properly. Guillermo Del Toro originally was interested in making a Deadman film, but instead, he decided to pursue another film that will be discussed later on in the list. 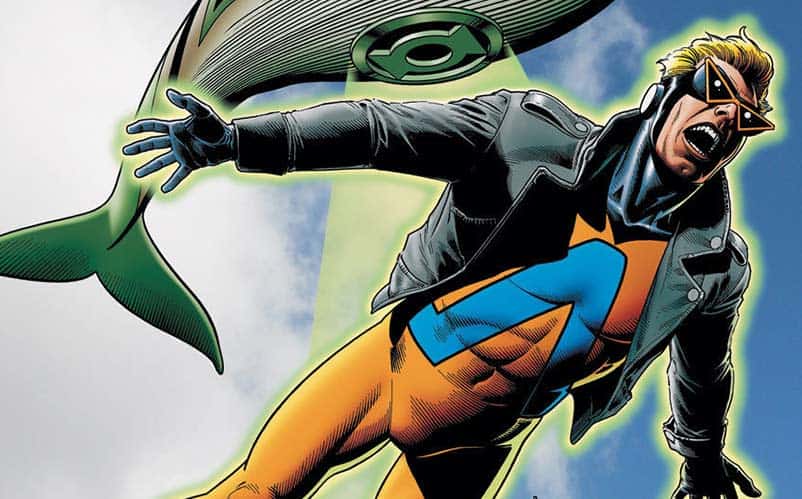 Animal Man, since relaunching with The New 52, has had newly found success, and potential as a DC movie character. The current version of Animal Man is a very relatable character who is grounded by family and a sense of self.

He has the ability to gain the strength and agility of any existing animal. However, he has a strong tie with his loved ones, so he is a much more reserved superhero than we typically see in DC movies. Creating an Animal Man movie, or bringing him to the big screen in another hero’s movie, would allow a director to focus on his family drama or his superhero abilities, both being a good choice for his film debut. 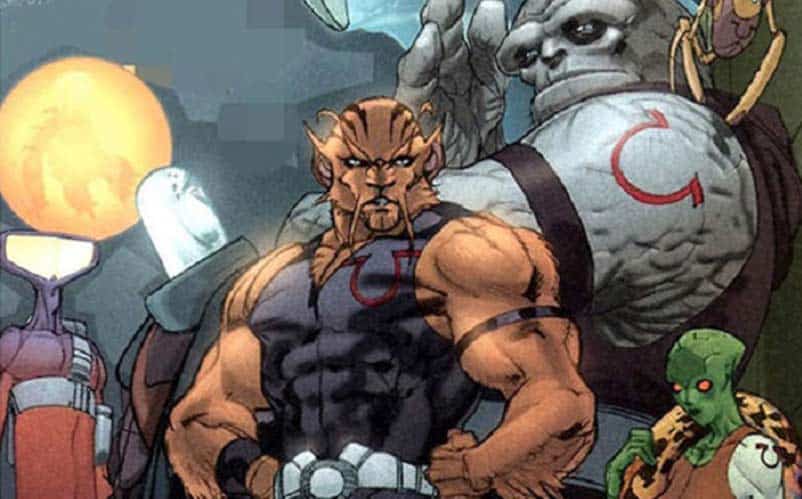 Critically praised, The Omega Men comic series has brought a group of brutish aliens together to fight a violent dictating force. The series has been dark and gritty, which would be a huge contrast to the lighthearted Guardians of The Galaxy.

The Omega Men are dangerous and willing to take lives for the greater good, which is something we don’t see in Marvel movies. With the current run including Kyle Rayner of Green Lantern fame, it would be interesting to see an Omega Men movie set in a dark fantasy movie. We have seen a lot of space adventure movies, but the Omega Men could bring the genre into a different light, making for an intense visual spectacle. 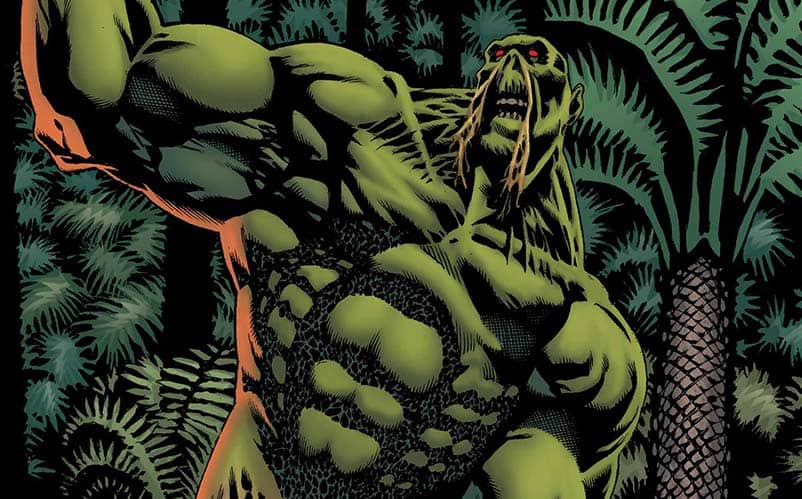 It might be tough bringing the Swamp Thing into the current DC film universe, but it isn’t impossible, and this is where Guillermo del Toro comes in. He has been in talks with Warner Bros. for a while about making Justice League Dark a movie series.

However, there have been quite a few hiccups with production. Originally, del Toro was set to make the movie, but there were scheduling issues with Pacific Rim 2. Now that Pacific Rim 2 is being helmed by Daredevil’s head writer, the rumor mill has been churning, and Justice League Dark may live on in the near future.

The film could include a few characters from this list, such as Zatanna, Deadman, and the Swamp Thing, focusing on the supernatural side of the DC universe. Swamp Thing has always been a star of many comics, being the beloved gentle giant that he is. Swamp Thing’s ability to manipulate plant matter could be a wild on-screen effect, and his deep connection with the earth makes him a must-add to the DC film universe. 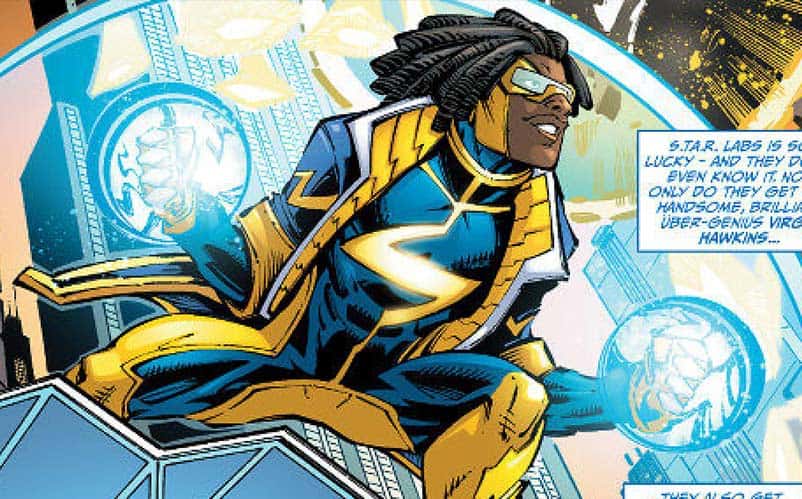 Virgil Hawkins is the perfect choice to be included in the DC films. He is largely given minor roles in the comics, and he could be considered one of the more underutilized superheroes that DC has. The Static Shock animated TV show that released in 2000 brought him into the mainstream media to then have him basically disappear after the show ended.

It’s a good time for him to be added to the live-action films because the audience that watched the show then is the same audience that will be watching the new series of films. His abilities to use electricity and magnetism make him a unique addition to the current film roster. He is a strong, witty, and nerdtastic superhero, which is something the DC film franchise needs to bring to life. There are rumors that Jaden Smith will be donning the Static persona for a webseries, but with few updates, we can only hope that means Static will be appearing on the big screen instead. 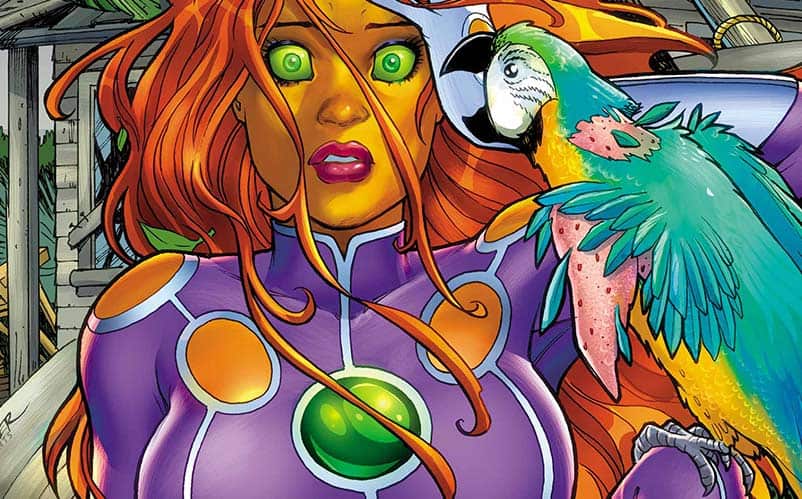 Many may know her from her time as a member of the Teen Titans, including being in the animated show of the same name, but Starfire is a strong character that deserves to shine on her own. Being a refugee from her home planet, she is a deep character that fights for acceptance and affection.

Her abilities include flight, super strength, and the use of energy blasts. She has held her own with some of DC’s strongest, and she has proven her worth on the battlefield on numerous occasions. Starfire’s relationship with another major DC character also brings her movie adaptation closer to reality. 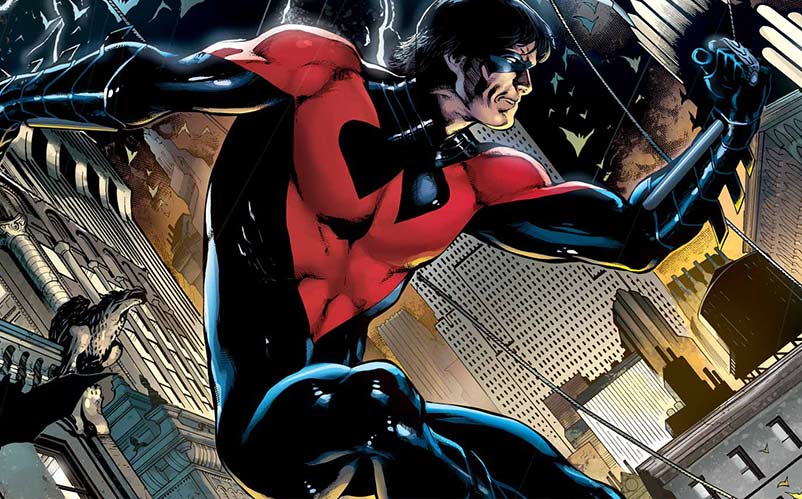 Nightwing is a must-have for the new DC films. Dick Grayson, the original Robin, eventually outgrew his red and green tights and then donned a darker, more mature alter ego with Nightwing. As the new DC films have become more mature in nature, the addition of Robin seems difficult to bring to life. Nightwing, on the other hand, is a perfect fit for the new DC film universe, as his acrobatic skills and hunky looks make him a great character that could add a lot of depth to the new franchise. His relationship with Starfire, Batman, and many other heroes in the DC universe makes his story easily accessible and interesting for future films. It would be surprising if he weren’t added to the universe at some point in the near future. 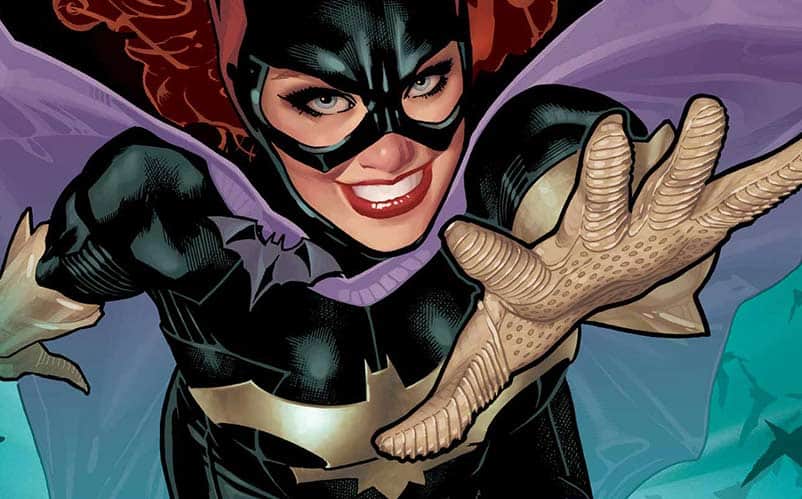 With her recent popularity and deep connections with the DC universe, Batgirl is the top superhero we want to see in a DC movie. She kicks butt, is witty, and has defied all odds. There have been many iterations of Batgirl in the DC universe, which means many choices for a film adaptation.

The current comic rendition of Batgirl has redefined the character with a lighthearted, very accessible characterization, making this version a great choice for a movie; it’s undeniable that DC needs some lightheartedness in their movie universe. She is a strong hero that has fought through many internal battles that are relatable for a wide audience. Batgirl has a lot of depth stemming from her backstory involving the Joker and her past being the Oracle. As the DC film universe grows we hope to see Batgirl in the theaters soon.

Editor’s Note: Nearly a year ago, we also made the plea for a Batgirl game, which, unfortunately, hasn’t happened yet. Clearly, we love Batgirl, especially in her newest iteration.