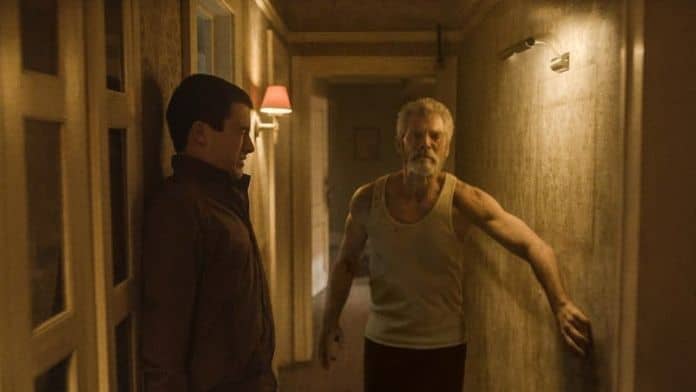 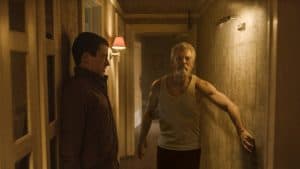 Horror has had a fairly successful year, despite the massive blockbuster bombs that have been going off all summer. With movies like The Witch, 10 Cloverfield Lane, and The Conjuring 2 offering a variety of chills, Don’t Breathe looks to kick the fall horror season into high gear. Directed by 2013’s Evil Dead mastermind Fede Alvarez, this tense thriller offers up a simple presence and shows off a fantastic use of tension and cinematography. Even though the movie stumbles in the final few moments, this is perhaps the best horror movie of the year.

Our story follows three would be thieves who are all impoverished and simply are looking to escape from their rundown lives in Detroit. One of the thieves, Alex (Dylan Minnette), is the son of a security company worker and thus is able to disable the alarm systems of homes. Joined by gangster Money (Daniel Zovatto) and his girlfriend Rocky (Jane Levy) the trio sets to rob a blind man (Stephen Lang) who’s supposed to have over $300,000 in cash from a settlement he won. However, said blind man is also an army veteran and a complete badass that has the layout of his house memorized.

One of the genius aspects of Don’t Breathe is you really don’t know who to root for during this film’s first half. None of these events would take place if the thieves hadn’t broken into his house, making it hard to fully be on their side. This lends Don’t Breathe an interesting dynamic and doesn’t simply cast Lang’s character as a Jason Voorhees type. Even when there is a fairly big twist about midway through the movie, Lang’s character is clearly a broken figure who’s just trying to assemble together some sort of happiness. It’s a great choice as it adds needed depth to the villain and keeps him from becoming a stale one-dimensional character.

This is only bolstered by Lang’s absolutely terrifying portrayal of this veteran, as he may be in the running for one of the scariest human villains in a horror movie. Not only is the make-up fantastic, but the subtle movements and nuances Lang includes bring this character to life. His movements feel real and even though he’s blind, the character always comes off as a worthy adversary. A lot of this plays into his acute sense of hearing and understanding the layout of his home, which helps his antics feel far more grounded. 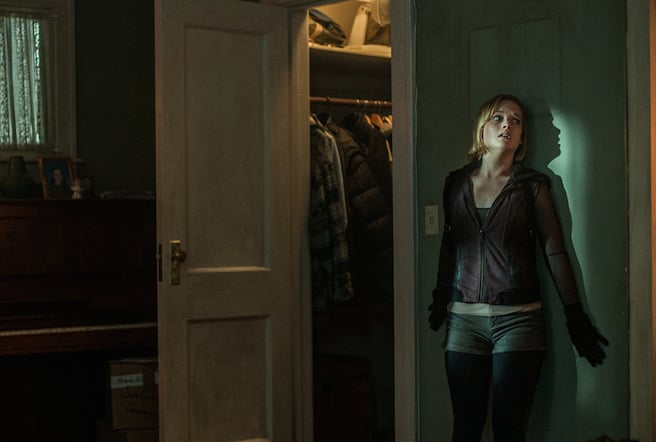 In terms of our three would-be burglars, all of the actors do a great job with their performances, though Minnette is the weakest of the principle two victims. While it looks like the story is going to expand upon his relationship with Rocky, it’s clear that Alvarez just didn’t have the time to fully explore it. This goes the same for Money, who if you’ve watched literally any trailer for this movie know what’s going to happen to him. Sadly, this sucks a bit of tension out from his survivability and the movie doesn’t have enough time to dive into who this character is.

However, this is made up with a surprise introduction about midway in that I won’t spoil, but needless to say, it changes the game up. This constant state of leaving the audience in the unknown allows Don’t Breathe to pull off some seriously effective moments of tension and horror. The camera glides through the house slowly, allowing us to understand the layout of the entire building which helps when the action kicks in later on. Horror moments are constructed with care and never over stay their welcome, acting as just another tool for the blind man to use against his foes.

In terms of the violence, it’s kept at a tasteful level, which may surprise some people given how absolutely over the top Evil Dead was. Even for an R-rated movie the violence is never over the top and it’s clear that Alvarez is going for a realistic approach to the bloodshed this time around. Even when the final portion of the film kicks in, fans will probably be invested enough to not question some of more absurd choices all of the characters make. Though Don’t Breath does suffer from multiple ending syndrome, as it’s never truly clear when the movie is going to end. The last few scenes all feel like solid closers, but each one is uprooted by another ending sequence.

Overall, Don’t Breathe is a near masterclass is building tension and creating a fantastic horror movie villain. While it does have the occasional jump scare, there is a ice balance to simply building up unsettling moments. Not to mention the absolutely fantastic sound design and cinematography. With more horror movies on the way, it’s going to be interesting to see if anyone can top Don’t Breathe. If we’ve learned anything from this experience, it’s never piss off Stephen Lang.