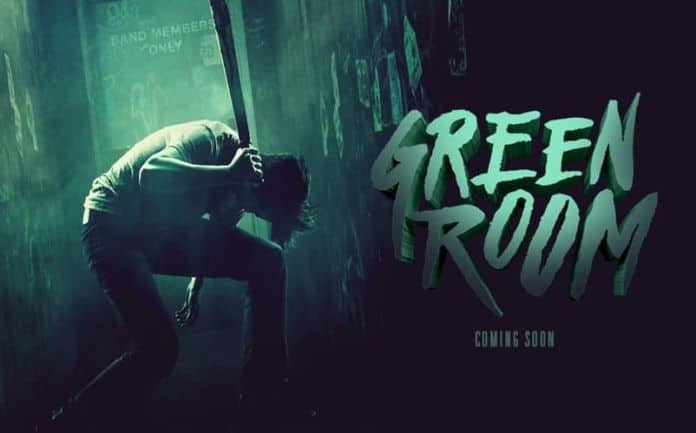 When it comes to horror, almost every single type of killer or monster has been overdone. Yet, skinheads are largely underused, despite their terrifying and bloody history. Enter Green Room, a tense thriller that showcases the gritty brutality these individuals implement, while remaining exceptionally tethered to reality.

The story follows a struggling punk band that lands a gig at a backwoods bar that’s anything but welcoming. By complete accident, one of the members stumbles upon a murder in their dressing room, thrusting them into a chaotic and bloody scenario. It’s a simple premise that sets up a largely successful story, as the circumstances of their situation are fairly believable. They are just a bunch of kids, who were simply in the wrong place at the wrong time. Thanks to a nuanced performance by Patrick Stewart, playing the skinhead leader Darcy, fantastic tension building, dark humor, and a great story that may make Green Room one of the best horror films of 2016.

Now, the film is not without its issues, as the actual band, themselves, are very hit and miss. The guitar player and lead of the movie, Pat (Anton Yelchin), makes up most of Green Room‘s main character arc. Pat’s greatest strength is that he is highly relatable in both his actions and motives, especially once they become trapped in the concert venue. Unlike most horror victims, Pat isn’t afraid to fight when he needs to, but also recognizes the sheer chaos around him. He’s just as scared, confused, and anxious as anyone else would be when put in such a situation, which allows the film to have a far more grounded feel. Horror movies live and die on their leads, as we need to relate to and embody them in some capacity for the real tension to set in. I have to be invested in their survivability and thanks to Yelchin’s fantastic performance this was quite an easy task. Though his turn at the end is slightly questionable once the third act rolls in, which may disconnect you from the film.

Sadly, the rest of the band didn’t get the same treatment as Pat. Don’t get me wrong — all of the cast’s performances were great, but they just don’t receive as much screen time as Pat. It’s understandable, given the 90 minute runtime, but my lack of care for the rest of them didn’t allow certain emotional moments to truly hit home. One character, in particular, felt more forced into the plot for the sake of adding another body to the mix. While I won’t spoil how she tangled up into this mess, Amber (Imogen Poots) is just not that interesting of a character. I’m clearly supposed to care about this girl, yet I could never find myself rooting for her. She lacks any development, as even when the credits roll, you still basically know nothing about her. Though this isn’t as true for the rest of the band members, they still could have used a bit more time to truly flesh out their personalities and relationships. 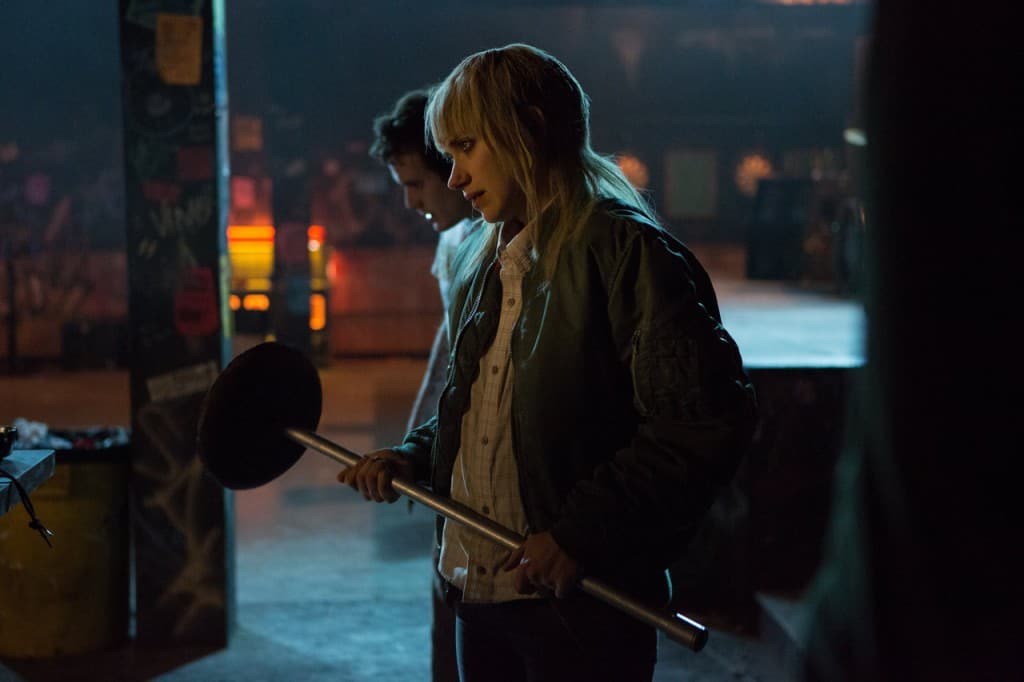 Looking at the other end of the morality spectrum, our gang of skinheads is downright terrifying. While it would be exceptionally easy to just throw a bunch of crazy racists on screen just to use them as killers, director Jeremy Saulnier takes a far smarter approach. Some of these skinheads have more personality and motivations than you might expect. These aren’t faceless killers, acting only as a driving force for the horrific moments that Green Room certainly is filled with. Saulnier does the unthinkable by humanizing them, offering layers of depth to both their culture and narrative arcs. This leads to some fantastic misdirection, as some of their actions may catch you off guard completely. By humanizing the movie’s killers, it only makes the actual bloody acts that much more impactful. The standout among the group is Big Justin (Eric Edelstein) who, despite his clear ties with the skinheads, isn’t comfortable with all of the impending violence. While Big Justin’s character arc makes up most of the film’s moral backbone, this is very much Patrick Stewart’s movie.

Stewart’s character is a revelation. It’s a nuanced and terrifying performance that will have you seeing the wildly popular actor in a completely different light. Darcy isn’t physical imposing by any means, yet the subtleties that are added to his character more than make up for this. He is the brains behind the rest of the skinheads brawn, which makes him a far better antagonist. Too many horror movies rely on the sheer size and power of a villain to produce scares, but Darcy’s capacity to out think and strategize kept the tension far higher. He’s a man who has clearly done this before, as he goes through the motions of dealing with another set of gruesome murders. Even to the very end, Darcy remains a very foreboding villain, refusing to back down in any situation. It also helps that Patrick Stewart gives on hell of a performance, stealing the spotlight every time he is on screen. 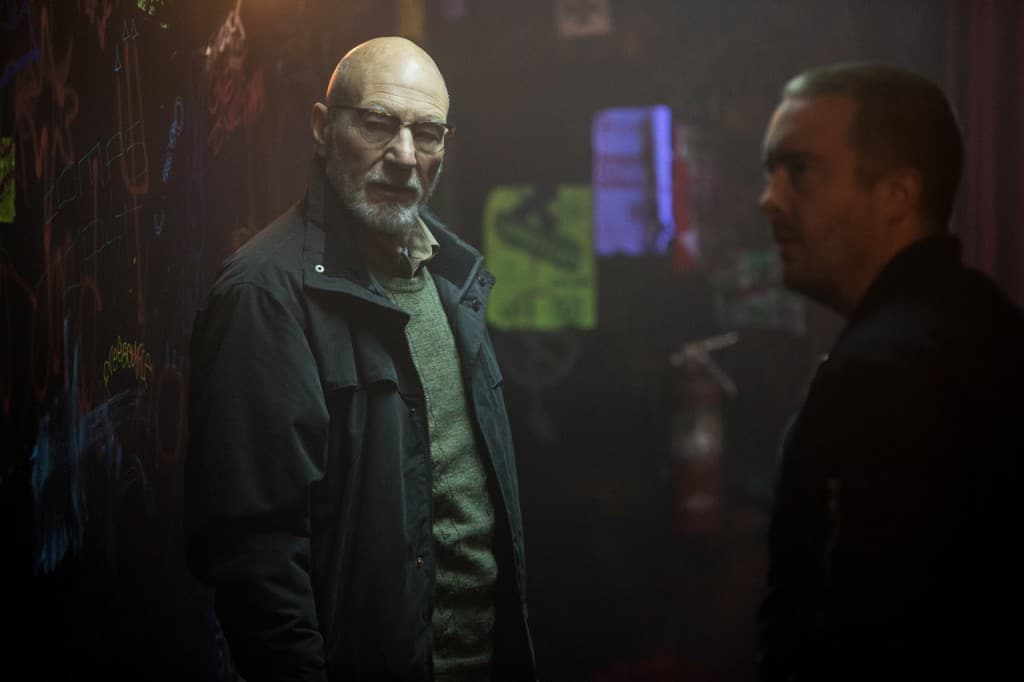 And what a bloody, gory spotlight that is. Make no mistake, Green Room is a very violent film whose grounded reality only enhances that. Saulnier doesn’t over do it with the violence on screen, but offers just enough glimpses to make your stomach turn. Thankfully, the violence in this film isn’t too overbearing as it has just enough moments of downtime to lull you into a false sense of security. However, Green Room is not a perfect movie, as it gets a bit silly during the third act. You can tell the director was trying to figure out a way to quickly wrap it up as some of the choices that the character’s make near the end feel a bit silly. I can see why the movie went this direction, but it felt to disconnected from the first and second act.

That being said, Green Room is a great horror movie that delivers one of the best antagonists the genre has had in years. It’s an uncompromising, bloody story that mimics the frantic, raw energy of the underground punk setting. Even with a weaker third act and some underdeveloped characters, Saulnier gave life to a largely stale genre. Green Room is a mosh pit of blood, bone, and brilliance.