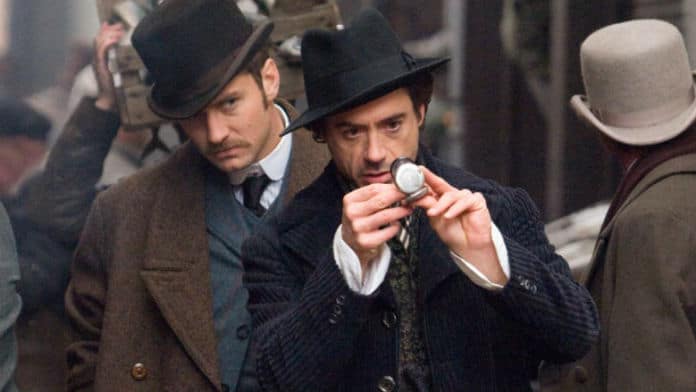 It looks as though the return of Holmes and Watson will be arriving later than originally anticipated. Warner Bros. has issued a revised film slate which confirms that the Sherlock Holmes 3 release date is being pushed back a year to late 2021.

The third installment in the series, led by Robert Downey Jr. as Sherlock Holmes and Jude Law as Dr. Watson, was originally scheduled to arrive in theaters on Christmas Day next year. Warner Bros. has now rescheduled the Sherlock Holmes 3 release date for December 21st, 2021. The studio confirmed that another big title would be replacing the movie in its Christmas 2020 slot, but gave no other details other than noting that it would be a big time event film.

A synopsis for the third movie has yet to be provided. But we do know the script was co-written by Chris Brancato and Joel Silver. A director has yet to jump aboard the project as of yet.

As for what else Downey Jr. and Law are up to in the meantime, the duo each have pretty high profile projects coming up. We’ll see Law first in Captain Marvel, hitting theaters on Friday. He plays Yon-Rogg, a character that’s the commander of the Starforce and a mentor to Carol Danvers.

Robert Downey Jr., of course, will reprise his role as Iron Man/Tony Stark in Avengers: Endgame next month. Marvel has offered next to nothing about the culmination film, but it’s entirely possible it could be Downey Jr.’s last appearance within the MCU. Let’s hope not.