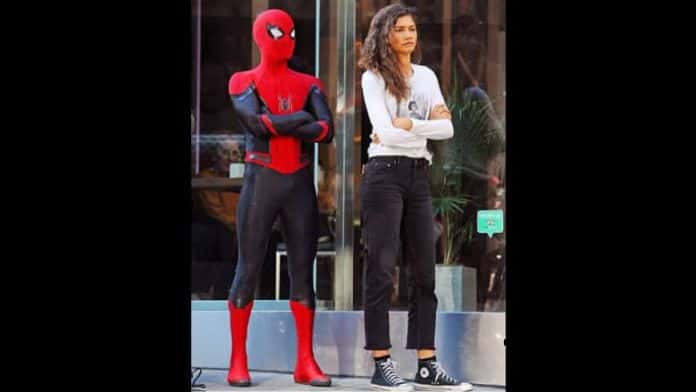 That’s a wrap on Spider-Man: Far From Home. Tom Holland took to Instagram a bit earlier to announce the news. And the actor dropped a few behind the scenes pictures of the final moments of filming as well.

The movie’s Far From Home subtitle signifies the globetrotting nature of the upcoming Spider-Man sequel. But in Holland’s Instagram posts we see that filming of the movie ended where Spider-Man’s story began – New York City.

Holland published a photo that he states is halfway through the final day’s filming. It shows Spider-Man in his new suit that sports the standard red coloring but now features a black or dark blue secondary hue. In the image Spider-Man looks to be swinging horizontally from a street pole on the city streets.

Another photo that Holland pushed out to fans via Instagram was of Spider-Man in the same suit standing on the side of a city street. He’s joined in the image by Zendaya’s Michelle “MJ” Jones. In Holland’s capture for this picture he confirms “THATS A WRAP”.

While Holland and much of the crew are finished filming on Spider-Man: Far From Home, us at home are still in the dark as to what the movie is actually about. We know that Michael Keaton returns as Adrian Toomes, aka The Vulture. The character was incarcerated at the conclusion of the last film though, so we may only have Keaton in the film briefly.

Jake Gyllenhaal joined the project as Quentin Beck, better known to many as the villain Mysterio. And we know the Homecoming sequel includes Marisa Tomei as Aunt May, Cobie Smulders as Maria Hill, and Samuel L. Jackson as Nick Fury.

The movie will release in theaters on July 5th, 2019. This gives us just about 2 months to digest whatever transpires within Avengers 4, which hits theaters on May 3rd.