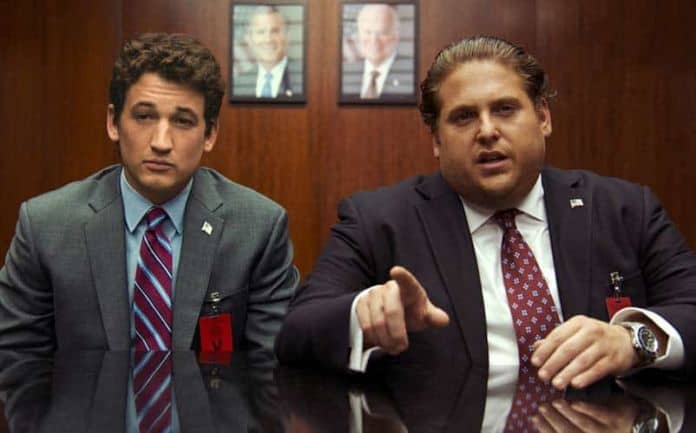 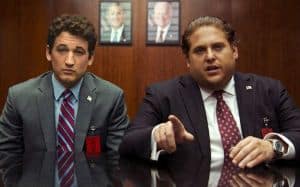 War Dogs is a film with an identity crisis. On the one hand is wants to be a film focused around us loving a bunch of degenerates as they move from one humorous situation to another, a la The Wolf of Wall Street. However, the film also tries to come off as a serious, character driven drama once the second act rolls in. This disjointed approach hampers what could have been a great story and ultimately causes War Dogs to misfire. Even though there are some truly funny moments, this is movie weighed down by poor direction and a lackluster script.

War Dogs follows the story of David Packouz (Miles Teller), a young man who is unable to hold down a steady job and is struggling to survive. During a funeral, he reunites with his best friend from high school Efraim Diveroli (Jonah Hill) who is a professional arms dealer looking to expand. Eventually the two partner up and try to earn as much money as possible by any shady, illegal method they can. The plot at first glance seems ripe with opportunities to have fun, amusing situations for our characters to get into. This is largely the case as the first half of the film is far more focused on the humorous moments of two twenty-somethings trying to be gun runners.

Even though some of the jokes are hit and miss, War Dogs is clearly trying its best to endear us to these main characters. One of the best moments involves the duo having to trek across the Jordan/Iraq border while delivering a shipment of firearms to the U.S. Military. However, these moments are few and far between as most of the jokes either land flat and are only punctuated by Jonah Hill’s characters absolutely annoying laugh. There’s real comedy talent behind this movie, but if you are going to make both of your main characters scumbags, we need to have a reason to care about them in some way. 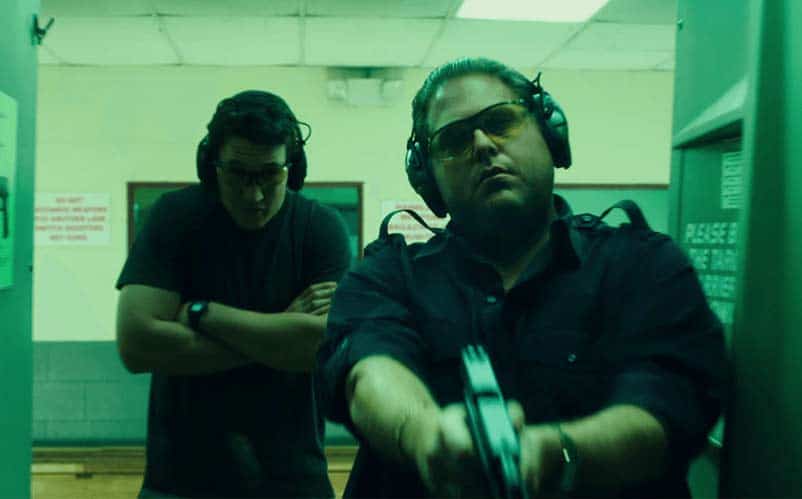 It’s important to note that I’m hardly against making terrible people’s acts funny, but that requires us to be able to laugh with them and not at them. While both leads do a commendable job, their characters are poorly developed and lack any real sense of depth that could humanize them or their actions. Once you are introduced to both characters and are given their motives and ideological differences you can see how this story will end up a mile away. In fact, this can pretty much go for every character in the entire movie as none of them are interesting or even remotely developed.

This wouldn’t be as much of a problem is War Dogs stuck to the comedy aesthetic it laid out in the first portion of the film, but by the time the latter half of the second act rolls in the film’s tone changes entirely. For whatever reason, director Todd Phillips decides to shift his film’s genre to a character driven drama piece that causes the entire film to fall apart. Once this happens, the weak characters are not enough to hold up the story or offer any compelling moments. Emotional beats are missed throughout and the movie’s pacing grinds to an absolute halt.

Even the overall cinematography reflects this as the high-energy first half lacks any sense of rhythm or speed that the movie desperately needs. The result is a sluggish second and third act that lacks any sense of personality or emotional weight, brought by poor character development and lazy writing. 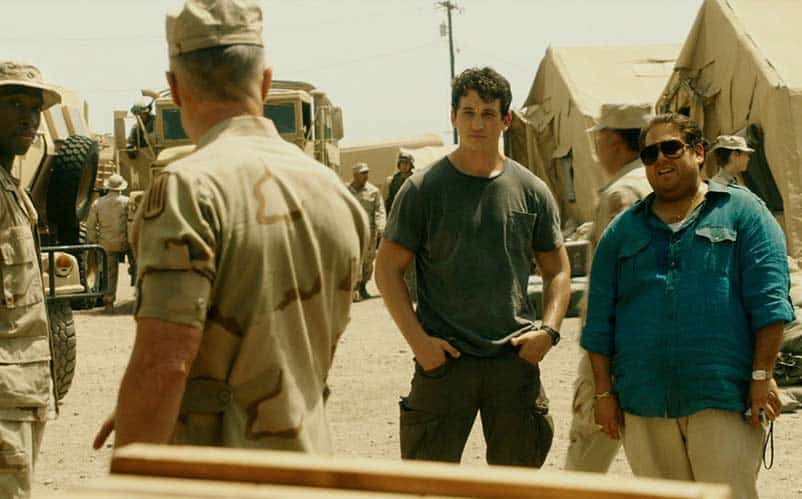 It’s not like War Dogs doesn’t have the ability to tell an interesting narrative or deliver a compelling message as the topic itself is rarely discussed. However, this comes out as frustrating as War Dogs barely scratches the surfaces on any of the big messages and ideas it’s trying to convey. War Dogs clearly wants to discuss how backwards the arms dealing business is, but it never commits to taking a stance on how we should feel about it. Both characters have a few arguments over the legality, but most are cut short before any real impact or thought provoking moments can be had.

Which, once again, wouldn’t be as big of a deal if this film was going for a straight comedic approach. However, it’s clear that this film wants to have dramatic elements as well, which only shines a bigger spotlight on the problems. War Dogs is a movie that had the potential to be great but was weighed down by poor pacing, a weak script, and inadequate direction. Even though both actors give commendable performances and there are some funny moments in the first half, it’s not nearly enough to save this movie. War Dogs is somewhere between The Wolf of Wall Street and Lord of War, but can’t make up its mind about which film it wants to emulate.