Nerd Much?
Home Games NBA Playgrounds Is A Sleeper Hit (That Will Only Get Better) 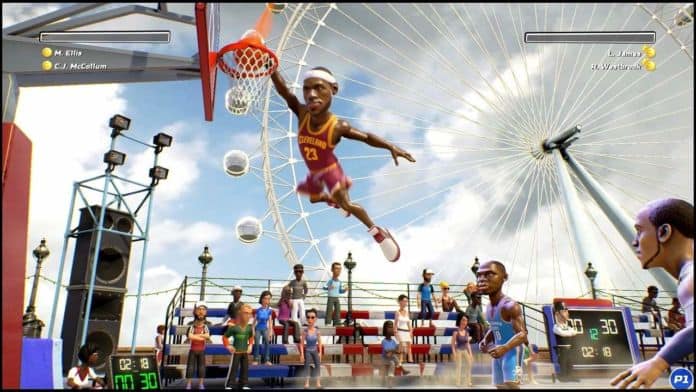 I was skeptical of NBA Playgrounds at first but was quickly proven wrong. Initially, I wasn’t sold on the trailer and was turned off by the whole big heads thing.

But after getting the hang of the controls and playing a few matches, NBA Playgrounds quickly became one of my go-to games on the *Nintendo Switch. (*it’s also available on PlayStation 4, Xbox One, and Microsoft Windows). 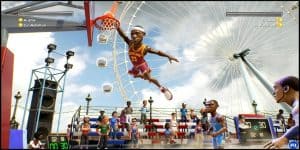 Unfortunately, the gaming community is far too hung up on NBA Jam to appreciate what this title has to offer. I get it guys, you had a childhood and remember it fondly. What else is new?

NBA Jam isn’t even the best basketball arcade-style game. Where is the love for NBA Street?

All shade aside, the mainstream criticism surrounding this game is frustrating because a lot of it is off-base while ignoring other flaws the game actually has. I love this game so I’ve come to its defense (but that doesn’t mean I don’t have some changes to make either). So, allow me to set the record straight:

NBA Playgrounds is NOT too hard

NBA Playgrounds comes off as a little intimidating in its control scheme: 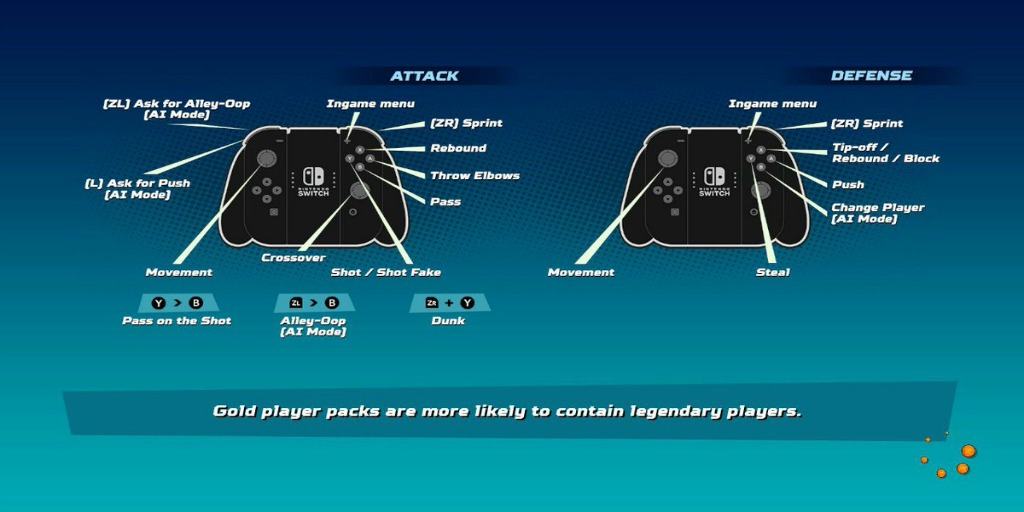 But it’s not nearly as complicated as it first looks. NBA Playgrounds holds your hand during that first game. The controls are overlaid on the bottom of the screen and the game even freezes the action at times (sort of annoying) to highlight a specific move you can do. After that initial game, it all becomes pretty clear. When on offense you have turbo, shoot, pass, elbow in the face, and crossover. And when on defense you have turbo, steal, jump, change player, and shove. The challenge of NBA Playgrounds comes from stamina management and timing.

Your stamina, which is represented by a circular meter under the player, is pretty limited. It’s not enough to sprint from one side of the court to the other or shove every player you can. This means gamers have to be strategic when optimizing boosts, tricks, and hacking moves. Hacking other players (i.e shoving or elbowing) lowers your “Lottery Pick” meter. This meter gets filled by executing quality moves and, once full, randomly gives you a power-up (such as lowering your opponent’s shot clock or giving you double points for shooting from a specific spot on the court). 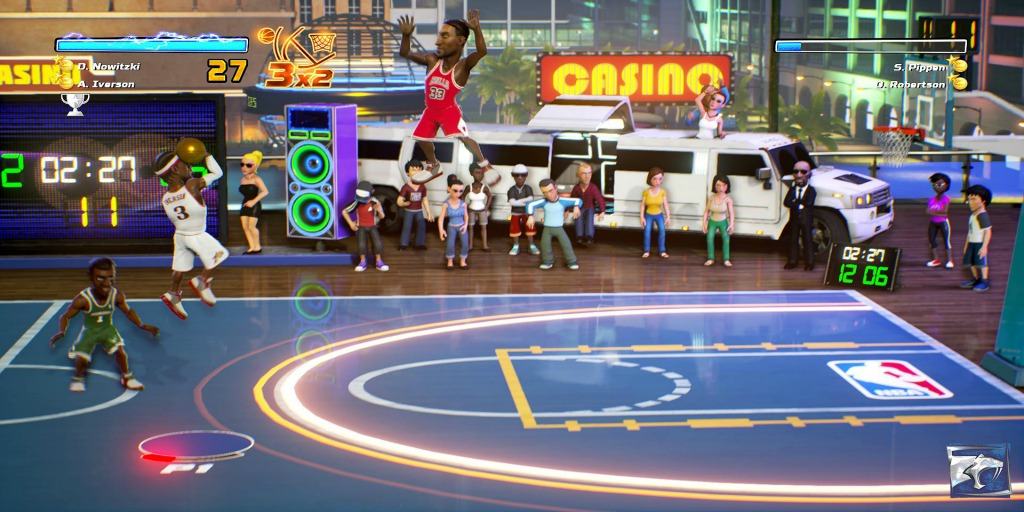 Timing is everything in sports and NBA Playgrounds is no exception. The secret to making a basket is timing: knowing when to release the ball (i.e let go of the button(s)). Something I love about NBA Playgrounds is that the game gives you immediate feedback on your shot timing and even rewards your mastery. With each basket, a text overlay will pop up that says “too early,” “too late,” or “perfect,” with a bonus point to go with it. Usually, with sports sims (both arcade and realistic), I have to deduce that information for myself based on how the ball bounces. NBA Playgrounds removes this guess work. 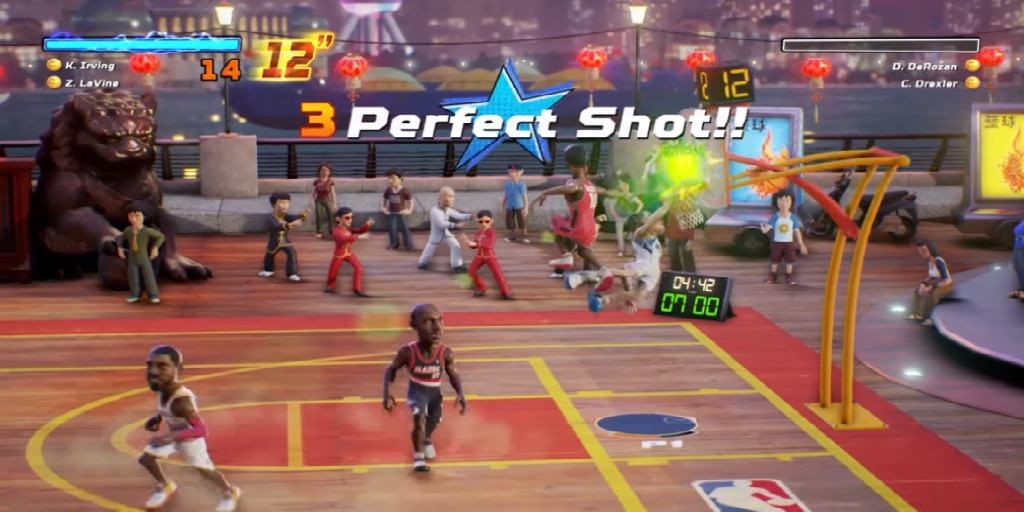 In NBA Playgrounds proper timing applies to everything, even dunks. This has been one of the primary sources of complaints, but I like it. Not gonna lie, missing a dunk leaves me feeling really salty but it evens the playing field. If everything on defense needs to be perfectly timed shouldn’t everything on offense have to be too? Or else it’s just two players scoring back and forth on each other.

As far as single-player mode, you really have to earn those additional courts in this game, as the CPU gets harder and harder. Luckily, unlike other games of its kind, you don’t have to win a tournament in one swoop. NBA Playgrounds lets you take your tournaments game by game, saving each victory and letting you pick up where you left off.

To me, this game may be a bit more challenging than others in its genre, but that’s not a bad thing. NBA Playgrounds may involve some strategy but that helps make it unique but it’s still an arcade game at heart. The face plants players make when their dunks get blocked and the fact that I saw a CPU literally do a cartwheel on the court are just two examples of how Playgrounds still fulfills that whacky sports sim fix.

This Game is a Joy

NBA Playgrounds has a level of challenge that will keep you engaged and a goofiness that will lighten the mood of even the most intense matches. There’s nothing like going up for a dunk, having the slow motion effect kick in, and wondering if your opponent will succeed in their attempt to knock you on your ass. 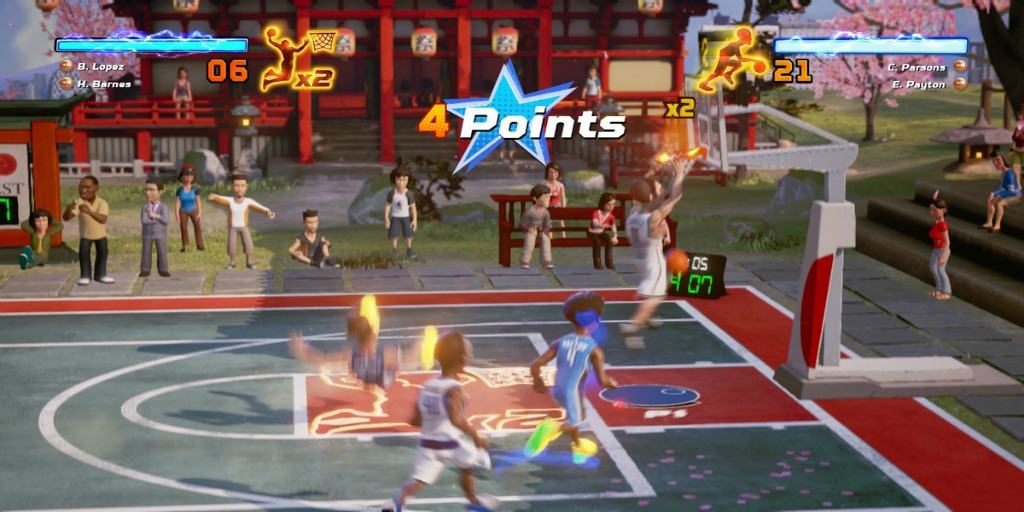 I’ve literally screamed during these slow motion moments, for I knew the inevitable was coming. Sometimes (if I anticipate it quickly enough) I pass in the middle of my dunk, avoiding disaster completely. And then there’s the anguish of having the unmissable shot power-up only to have your opponent steal the ball from you before you could get your shot off. But mostly this game is about a level of physicality that would never be allowed in the actual NBA because “anything goes on the playground!”

So pick up your sticks and channel your inner 90’s Detroit Pistons, NBA Playgrounds is a solid pickup for any fan of sports sims

But it’s Not Without its Flaws

While there are a lot of critiques of this game floating around the internet, oddly enough, none seem to express the issues I have with the game.

My number 1 issue with NBA Playgrounds, that no one seems to be talking about, is how it ends its matches. When the clock ends, the game ends instantly. This means even if you take your shot before the buzzer that shot is not allowed to count for anything. As if that isn’t egregious enough, it goes a step farther: if you get a shot off before the buzzer (that doesn’t actually go in until after the buzzer), of a tied game, you do not win the game. BUT when “overtime” starts you are in the lead.

So the game acknowledges that your shot went in (and even lets it count for something) but you did not win the game.

Arcade sports sims always take some liberty with the rules of their respective sports but the liberty taken is usually for sake of fun or simplicity–but here it just seems lazy at best and idiotic at worst.

Lastly, the following trash talk line, that the in-game commentators use, really needs to be patched out:

“He just took his masculinity!”

This is backwards, sexist trash talk that has no place in any game. Of all the trash talk in the game (ex. “Looks like he needs to switch to easy mode” “whoa, did he spill soda on his controller”) this is the only trash talk that is directed at the person rather than their ability to play the game. Additionally, it has really messed up implications: he scored on him so hard that he is no longer a man? Being a man means being athletic? Not being athletic means you are a woman/non-binary? Any way you spin it, it’s bad. Which brings me to my next point…

Patches Will Only Make This Good Game Better

Two patches have already been released for this game on the PC and will make its way to consoles soon. The latest patch aims to make the game more fair by adding a shot meter, but also using player stats to change shot accuracy (amongst other things).

Meanwhile, an announcement related to the Nintendo Switch version of NBA Playgrounds is coming to us later this week (which we pray is online functionality).

All of this being said, NBA Playgrounds has improvements to mak,e but it’s still a blast that no one seems to be talking about positively.

While Janet hits most of the points that needed to be made about the game, there is one I’d like to bring up, and that’s pricing. Let’s not forget that NBA Playgrounds isn’t a full $60 game; instead, it’s sitting at $20. All too often, we think of a game’s quality in comparison to other $60 games, forgetting to factor in its price when talking about whether or not we should recommend it. At $20, I’ve definitely gotten my worth out of it on the Switch as well, and even if you’re only mildly into arcadey basketball games, it’s a purely fun game that you’ll have fun playing with your friends.