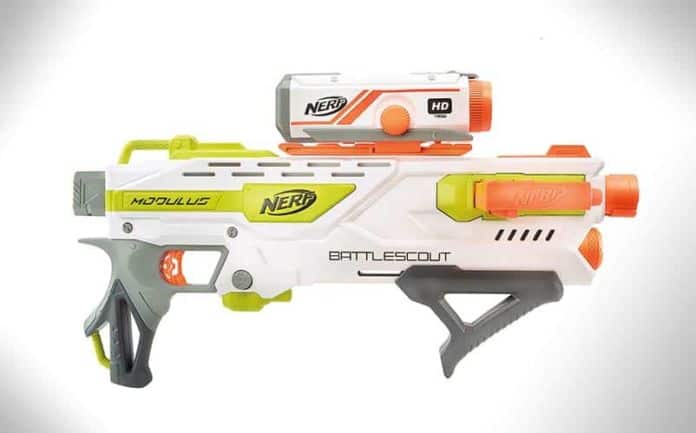 It’s no secret that we here at Nerd Much? love a bit of office warfare. Well, any warfare involving Nerf guns, really. Earlier this week we had our first look at a Nerf Zombie Strike Brainsaw Blaster, as well as a new crossbow. Today, everyone’s favorite toy gun maker has announced their newest, the Nerf N-Strike Modulus Battlescout ICS-10 Blaster.

The blaster features a new, integrated clip system, but its most notable feature is a removable camera (which the company refers to as the MODULUS camera) that shoots in full 720p HD. While the camera requires 4 AAA batteries, the gun itself doesn’t require any. The camera is entirely removable, so you’re able to move it to any other blaster with a tac rail. It’s an upgrade from the Nerf Cam ECS-12, since it shooters in higher quality. The Nerf N-Strike Modulus Battlescout ICS-10 Blaster is available now.