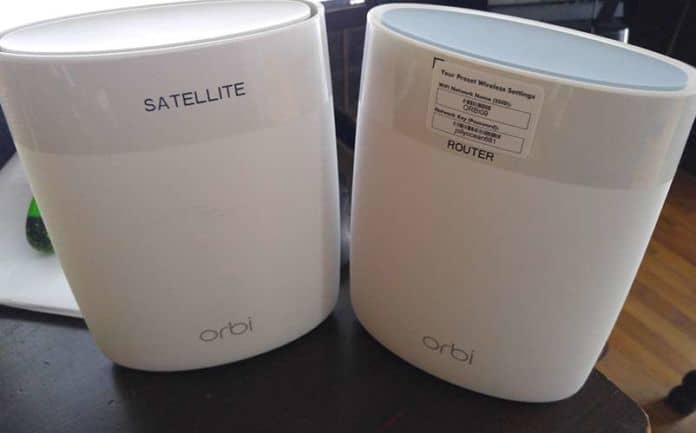 If you follow tech news even loosely, chances are that you’ve probably heard about Netgear’s newest router setup, the Netgear Orbi, which aims to fully eliminate Wi-Fi dead zones in your home. Before writing this review, I should probably note that I am knee deep in the router game, so-to-speak, with a houseful of gamers and Netflix streamers. Like many of you, I take my Wi-Fi quality seriously, which is why I’m currently using a Netgear Nighthawk X8 for my in-home needs. But how does the Netgear Orbi measure up to my current setup? 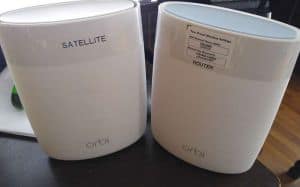 The most immediately commendable feature of the Orbi is its easy setup and ease of use. It’s super simple to get up and running: plug the router base into the wall, plug in the ethernet cord from your modem to the router as you would any other router situation, place the Orbi satellite in the middle of your home and turn it on, and then, well, you’re set. That’s virtually it! Load up a browser-based app of sorts and you’re ready to go. There’s nothing to pair, as it comes pre-setup. There’s also a color-coded light on top of the Orbi that will let you know the connection quality between the Orbi router unit and its satellite, with a full guide contained in the setup guide to tell you what those lights mean. Basically, there’s a “good” color (green), a “fair” color (yellow), and a “bad” color (the evil magenta) to let you know how the connection quality is.

The Orbi uses a tri-band setup, with one of the frequencies being used for the satellite unit, itself (as to not clog up the second band in a typical dual-band router setup). This means that the coverage area can be improved greatly without being at the cost of some speed. It’s a unique system that sounds confusing, but it’s really simple in practice. It’s especially notable for those who are venturing into smart home technology who are beginning to have a ton of connected devices; you can have them all connected without clogging up your Wi-Fi. 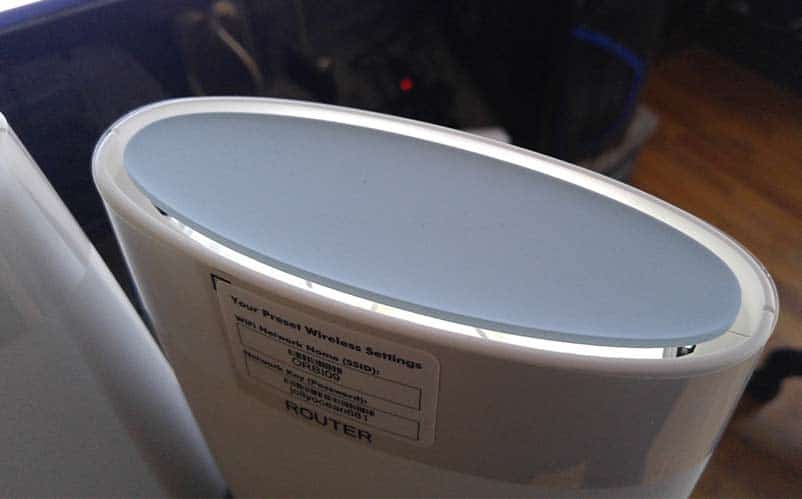 I’ll also note that both the satellite and the router unit can be used as routers; each has Gigabit ethernet ports on the back of it, with speeds capable of 3 Gbps (one can only dream of those speeds at this point).

Another great aspect of the Orbi is that if your home is big, or you decide you want to add stronger wifi in your backyard later on down the road, you can always add another satellite to your existing setup, broadening the range of your Wi-Fi (for a price, of course).

The only real surprise — and I want to stress the word surprise here is NOT a negative thing — that you’re getting with the Netgear Orbi is its surprisingly large size. The router is bigger in-person than we initially thought, and the satellite is the same size. It stands at roughly 10″ tall, and it’s about 5″ in width. It’s not a dealbreaker by any means, but it’s worth noting that you’re going to know it’s there. But it’s still a stylish and sleek-looking device; it doesn’t have the dated look that even some of the top options on the market present. There are no antennas, and it has the same basic aesthetic as an Amazon Echo.

If you set aside the high price of the Netgear Orbi, it’s the best way to cover your entire home with fast Wi-Fi. If you’re willing to shell out for quality Wi-Fi in your home — which, if you use it as frequently as I do, it’s a sound investment — the Netgear Orbi is a top-notch option. Most standard routers you’d find on the shelves at big box retailers will almost certainly leave deadspots in your home, and if that’s a major issue for your in-home wi-fi needs, the Orbi is a great solution that comes in at $100 less than its closest competitor, the Eero.

-Big Size Might be a Turn-off For Some
-Hefty Price

**Netgear provided us with a review unit.**

Previous articleOverwatch Holiday Skins We’d Like To See: 15 Festive Ideas
Next articleRogue One: A Star Wars Story Review
Bobby Bernstein
Bobby is the co-owner of Nerd Much?. Bylines at Heavy, Den of Geek, HiConsumption, and More! Like his nerdtastic tweets by following @Thirstiestgamer on Twitter..