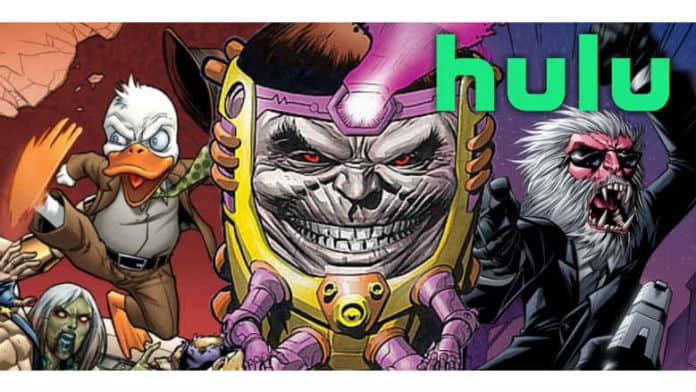 With Disney and Netflix seemingly parting ways following the official cancelation of Daredevil, Luke Cage, and Iron Fist, the former needed a new home for its many characters not currently in the spotlight of the Marvel Cinematic Universe. And with the success found in Marvel’s Runaways, Disney has decide to expand the Hulu roster. During the Television Critics Association’s Winter Press Tour, Hulu has announced 4 new Marvel adult animated series are headed to their platform. And the quartet will conclude with a Marvel’s The Offenders special.

The slate of new adult animated Marvel series is led by Marvel’s M.O.D.O.K. Hulu explains that the series “centers around an egomaniacal supervillain with a really big head and a really little body, who struggles to maintain control of his evil organization and his demanding family.”

Marvel television producer Jeph Loeb will executive produce the M.O.D.O.K. series alongside the show’s writing team of Jordan Blum and Patton Oswalt. The duo will also serve as executive producers as well.

Marvel’s Hit-Monkey is the second of the new adult animated Marvel series coming to Hulu. Written by Josh Gordon and Will Speck, who also executive produce with Jeph Loeb, “the series tells the tale of a wronged Japanese snow monkey, mentored by the ghost of an American assassin, as he cuts a wide swath through the Tokyo underworld in this darkly cinematic and brutally funny revenge saga.”

For the folks that never thought they would see a Marvel’s Tigra & Dazzler Show, your time has arrived. Coming to us from Erica Rivinoja and Chelsea Handler, who will also executive produce alongside Loeb, the series “is a story about two woke superheroes and best friends, Tigra and Dazzler, as they fight for recognition among powered people who make up the eight million stories in Los Angeles.”

Finally, the last of the 4 new Marvel adult animated series is none other than Marvel’s Howard the Duck. Kevin Smith and Dave Willis will write and executive produce with Loeb. Hulu offered a synopsis that reads “Howard The Duck is trapped in a world he never made, but America’s favorite fighting fowl hopes to return home with the help of his unstoppable gal pal Beverly before the evil Dr. Bong can turn him the crispiest dish on the menu.”

Finally, after the 4 new Marvel adult animated series make their respective runs, they will culminate in Marvel’s The Offenders. Jeph Loeb will guide all series in for a landing here. Telling “a story in which nobody asked them to — and we’d be better off if they didn’t — but MODOK, Dazzler, Tigra, Hit Monkey and Howard the Duck are all forced to team up in order to save the world and certain parts of the Universe.”

With names attached to these projects such as Patton Oswalt, Chelsea Handler and Kevin Smith, you know that these adult animated Marvel series are going to be packed with plenty of mature comedic beats. There’s no timetable on production schedules, but with the creative teams set, hopefully the ball will begin rolling toward Hulu’s impressive animated slate.

Previous articleJupiter’s Legacy Cast Announced by Netflix
Next articleNintendo Direct Tomorrow to Focus on Fire Emblem and Other Switch Games
Jeff Scott
Growing up a 90's kid, Jeff found his love for gaming during Nintendo's heyday. Because of that, you could (perhaps sadly) call him a "Nintendo Fanboy" to this day.