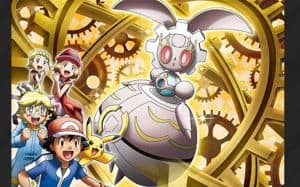 The Pokemon Company announced yesterday that a new Pokemon movie will be released later in 2016, and that it will feature a newly-discovered mythical Pokémon named Magearna (not Magiana, as people were previously calling it).

Pokémon has been going strong for twenty years now, and this latest announcement appears to be part of the ongoing anniversary celebration. The newest Pokémon discovered prior to Mageama was Volcanion, who will also play a starring role in the upcoming film.

Magearna is categorized as an artificial Pokémon, created by humans 500 years ago. It is described as having a height of about 3.03″ and weighing 177.5 pounds, and the creators promise more details to come as we anxiously await the movie.

According to the official synopsis, Ash is bound to the human-averse Volcanion by some mysterious force after the mythical Pokemon crash lands from the sky. It has no choice but to stick with Ash, as they arrive in a steampunk-esque city of gears and discover that Magearna has been stolen by a corrupt minister, who plans on using it to take over. It will fall on Volcanion and Ash to work together to rescue Magearna, making for what promises to be one of the most epic battles in Pokémon’s considerable history.

As of yet we have no time frame for the movie beyond later this year. Stay tuned, and we will keep you up-to-date on the latest information as it becomes available.