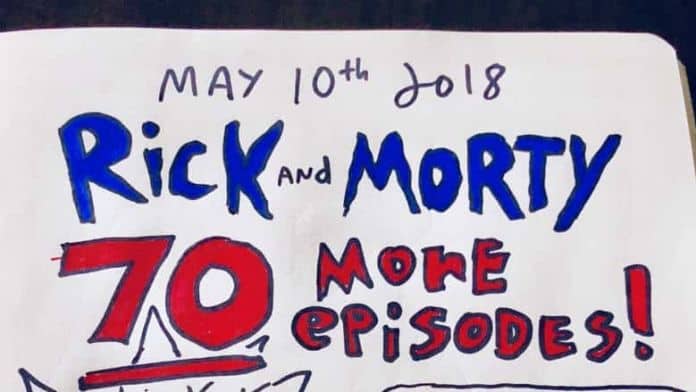 Fans have been clamoring for news regarding the future of Adult Swim’s Rick and Morty for some time now. Back in January, one of the show’s writers and producers stated on a podcast the new episodes weren’t even in development. But today, the future of the show is looking better. Much better.

Justin Roiland, one of the voices and co-creator of the show, posted an image on Twitter this afternoon to announce that the show was indeed returning. For 70 new episodes:

More Rick and Morty coming. Looking forward to all the tweets asking where it is! #theydrawingit pic.twitter.com/KZild3B9rP

Rick and Morty concluded its 3rd season on October 1st. Season 1 was comprised of 11 episodes, Season 2 10, and Season 3 10. So an order of 70 new episodes is perplexing when trying to break it down. Did Adult Swim renew the show through Season 10 with 10 episodes each? Or will Rick and Morty begin having longer seasons going forward?

The answer is likely the latter. The show’s other co-creator, Dan Harmon, was interviewed by EW back in September. The outlet asked Harmon “Does 10 [episodes] feel like the most you can do for keeping the quality high?” To which Harmon replied with the following:

“I don’t think so, but you shouldn’t trust me, because I mostly blame myself for doing 10 instead of 14. I’m still learning how to do the show efficiently while catering to the perfectionist in all of us. I would like to think I’ve learned enough from my mistakes in Season 3 that we could definitely do 14 now, but then I have to say, ‘Yeah but you’re the guy who says we can do 14 who turned out to be wrong so we’re not listening to you now.’

The nice healthy way to approach this is I want to prove it with the first 10 of Season 4 — prove it to ourselves, to production, to the network — that it’s so easy that we’ll earn additional episodes. Because I never got this far on Community. I fell apart in Season 3 of Community and got fired in Season 4. Now I’m about to do Season 4 of Rick and Morty and want to prove that I’ve grown.”

So it sounds as though, ideally, Harmon and Roiland want to target 14 episodes per season. But again, spreading that out across 70 new episodes makes it sound as though 5 new seasons are officially green lit.

In an awkward comedic bit, the duo of Harmon and Roiland announced via a shower clip that it’s time to get back to work:

No word yet when Rick and Morty is targeting to begin airing new episodes. But I’m sure fans will be hassling Harmon and Roiland constantly going forward until we find out.