Night in the Woods: a Problematic Cliché Disguised as a Quirky Indie 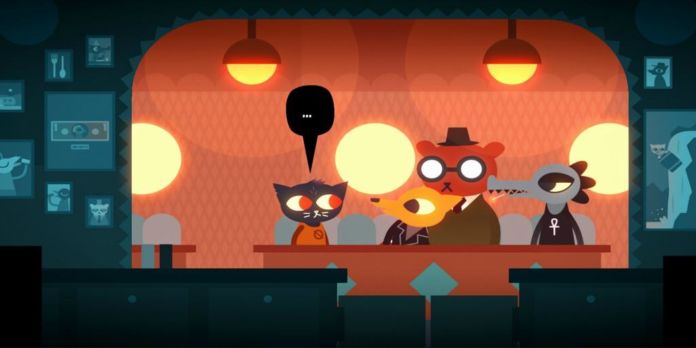 Night in the Woods: for some, it’s a long awaited title (Over 3 years since the Kickstarter was funded), for others it’s a point of curiosity as buzz continues to build. Developed by Infinite Fall, Night in the Woods is an adventure game in which you play as Mae, a cat and recent college dropout who has returned to her hometown to find things aren’t quite what the used to be. Her old friends all have jobs, some businesses have changed, and there’s an arm outside the dinner… talk about changes. The game’s plot is driven by Mae navigating the odd familiarity of being back home with this ominous town mystery looming in the background.

For the most part, the internet is singing its praises. Night in the Woods has earned positive review scores from most major gaming websites, and quirky beautiful screenshots are flooding social media. 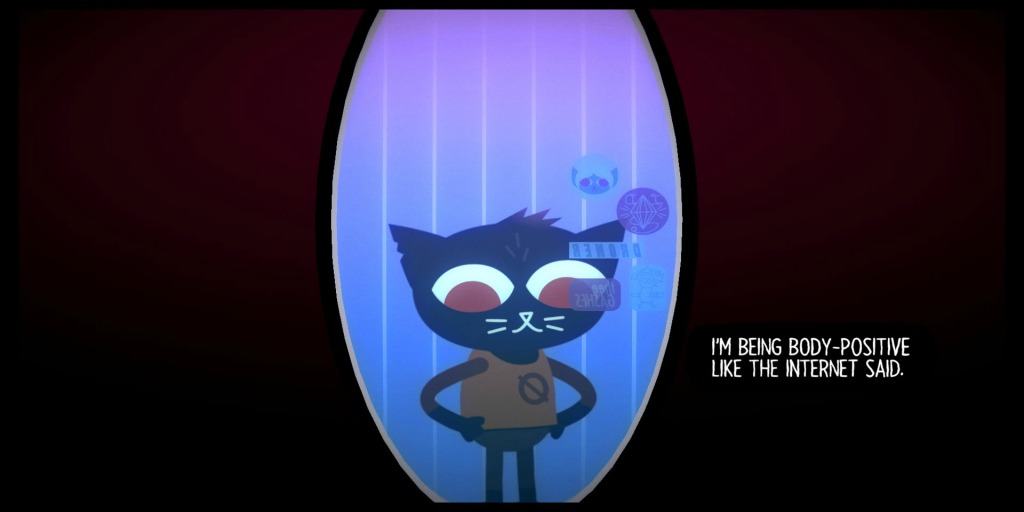 Fans of Night in the Woods cite the gorgeous cartoon art, the dynamic characters, and the witty writing. Many see themselves in Mae or recall their 20’s as, similarly, being a time of uncertainty and terror. But for everything this game gets right, the immature and obnoxious moments mixed in with what a horribly written character Mae is, makes it impossible for me to recommend this game. It’s worth noting that Night in the Woods absolutely shines in its final “part,” but it’s too little too late. This game is slow paced, but rather than stopping to smell the roses I find myself frustrated at almost all of Mae’s dialogue and being annoyed at how many times I have to visit the same 3 businesses in town.

Night in the Woods is potential that falls short and hits a few branches on the way down. Still, there’s a lot this game gets right. I connected with Mae as I, someone who sucks at rhythm games, struggled to play “Die Anywhere Else” on the bass. In that sense I, too, “d[id]n’t know this song.” I quickly fell in love with the harshly honest, grungy-looking Bea who avoids becoming a cliché by having several moments of vulnerability—opening up to you or intentionally keeping you at a distance. 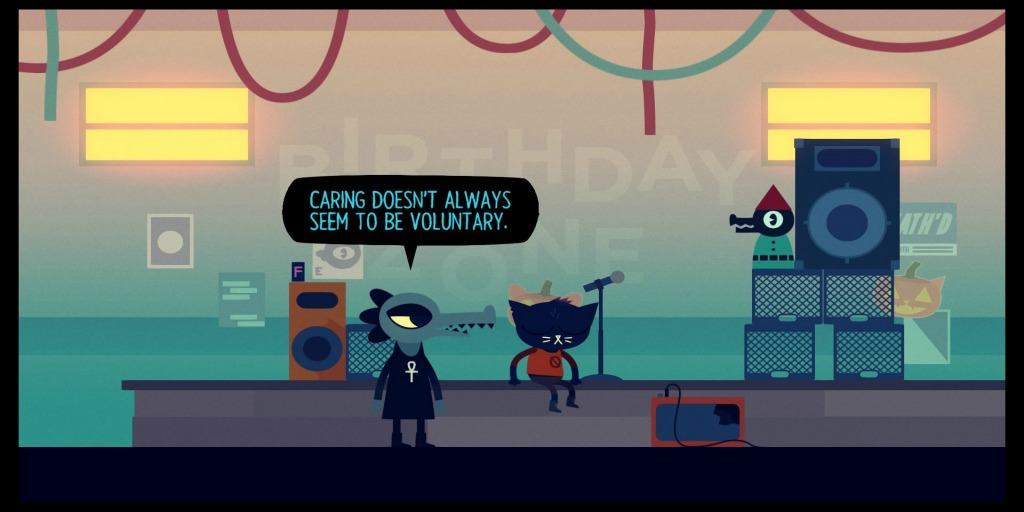 I appreciated how Mae’s mom was sweet, supportive, and a little corny yet surprisingly calls Mae out on her BS. The developer’s decision to turn Mae’s laptop into a casual “objectives list,” using the laptop to look at messages from friends, was nothing short of brilliant. In real life I constantly flip open my laptop and that compulsion transferred seamlessly to the game world.

Demon Tower, the dungeon crawler you can play on Mae’s laptop, is an absolute joy. And again, I can’t stress it enough, the final “part” of Night in the Woods was one of the most memorable game experiences of my life: in both writing and gameplay. Everything finally came together and I was completely engrossed in the world. I found myself, almost, rushing through things because I had to know what happened next. But this beautifully crafted, compelling ending was undermined by a nagging thought:

Why couldn’t the whole game have been like this? And by that I mean, why couldn’t Mae have been this way from the start of the game? 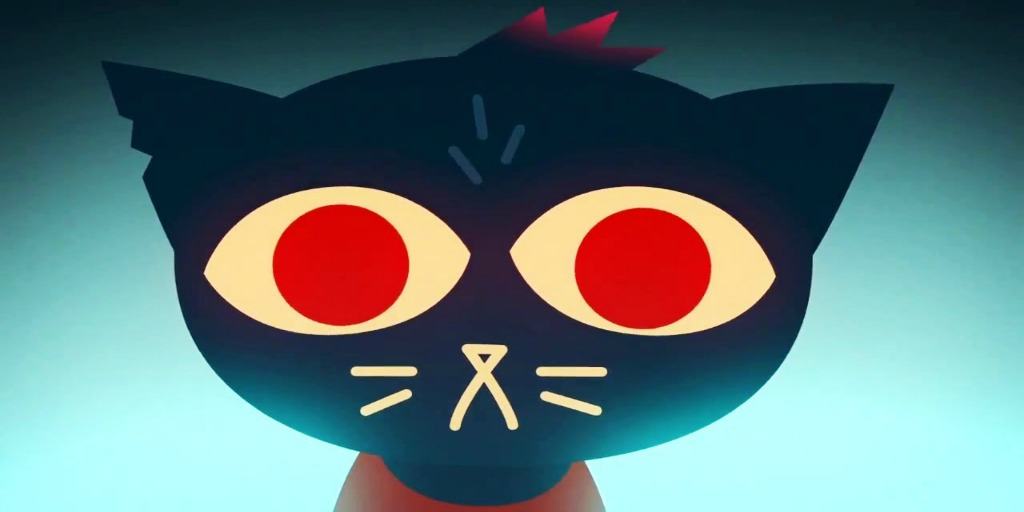 My primary issue with Night in the Woods is connected to Mae, the protagonist of the game. I understand a good character doesn’t have to be a likeable character but Mae is both unlikeable and poorly written. She is both cliché and cringe worthy. Mae, a sophomore who just dropped out of college and moved back home, has no job and no plans. She lives this way for well over a month (the game spans from fall to sometime in winter).

She’s rude to her parents on several occasions and refuses to discuss her life plans/why she dropped out. Playing overshadowed the good experiences Night in the Woods had to offer. Over the course of the game you get drunk and ruin a party, encourage your friend to shoplift from a Hot Topic type store, and have a knife fight with a friend for fun (like you did when you were kids). Seriously, what the hell, aren’t you like 20 years old? 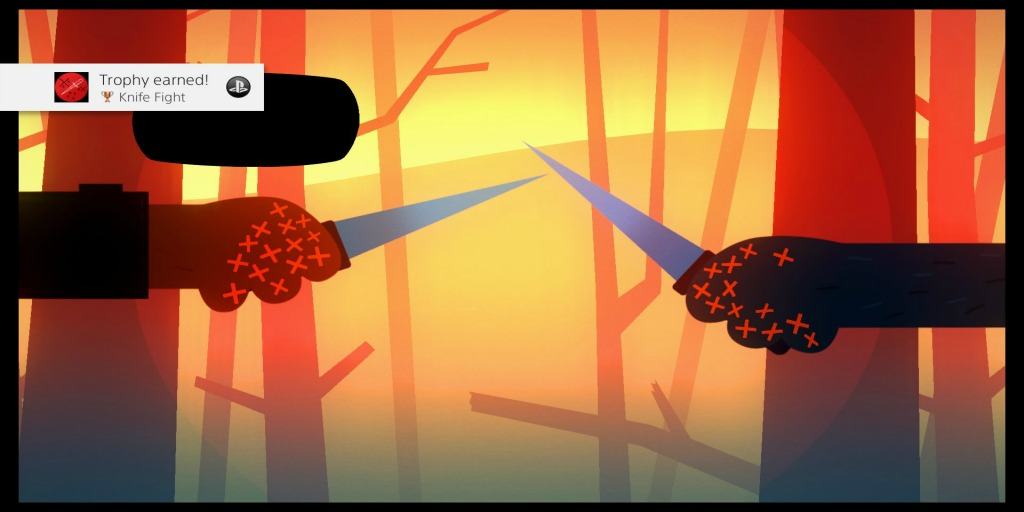 But Mae reached the pinnacle of trash when she completely smack talks a guy she meets at a party for studying political science due to interest rather than purely with a career in mind. She accuses him of being a yuppie with no real world experience “unlike Bea,” her friend who actually has a job and couldn’t go to college (despite wanting to) due to family obligations. This is grossly hypocritical of Mae and comes from a place of privilege that neglects Bea’s life experiences and feelings, despite trying to compliment her. Mae is equal parts self-centered and shit show; she acknowledges this, but does nothing about it.

I spent the entire game hating Mae but, towards the end, I nearly forgave her when she opened up about her struggles regarding mental health. This is alluded to throughout the game because we find out early on that she physically assaulted someone during high school and currently sees a therapist, sort of.

The scene where Mae discusses what goes on in her mind was the first time the entire game where Mae was a real fucking person: someone capable of vulnerability, someone who is multidimensional. I forgave Mae for about .5 seconds before remembering she is complete garbage. But after that, I realized this last second legitimate characterization is more than just a flaw in the game… it’s an issue I take with the depiction of mental health issues.

I’m not here for the asshole/shit show depictions of depression & anxiety. And in a game full of clichés (surrounding the lead character), Mae’s mental health issues become the most distressing one. The problem with this archetype of mental illness is two-fold:

1. It condones negative behaviors and promotes cycles of abuse.

Let me be clear: if someone is struggling with any issues—especially mental health ones—you should always take that into account. However, having mental health issues doesn’t make it okay for you to be an asshole. Nor do mental health issues create assholes. Of course depression/anxiety (I highlight these because the game does) influence behaviors but you still need to take ownership of who you are and what you do. Mae gives a few half-hearted apologies here and there, but not much. She also doesn’t take any positive steps in the game ever (unless you count dropping out which we later learn was due to depression/anxiety).

Mae’s monologue about her psychological state is extremely well-written. Reading it reminded me of a quick write I did while having a panic attack in the middle of my college campus. So for me, in particular, reading about Mae’s experiences was really emotional. It made me want to forgive everything she ever did. I think a lot of players would feel that way. Finding out the details of Mae’s psychology at the very end of the game sets us up for a last second moment of acceptance; that’s dangerous.

For one, it erases the person and makes them their illness. “Mae is like this because of her depression/anxiety” quickly becomes Mae IS her depression/anxiety, which is only partially true. I imagine Mae, like all of us, is multifaceted yet the game portrays her as singular. Her struggles with mental health feel tacked on yet manage to eclipse her entire character (what little of it there was, anyway).

Automatically forgiving people and allowing them into your life because their actions become justified in your mind is where the “abusive cycle” component comes into play. Sometimes we also need to cut ties with people. And if I was a character in Night in the Woods I would’ve cut Mae out of my life a long time ago. People’s issues (psychological or not) do not give them the right to treat you poorly. This is something I’ve personally struggled with as someone who has depression/anxiety but has also parted ways with people (who have similar issues to mine) because they were toxic. Night in the Woods’ giving Mae legitimate depth at the very end of the game, and rooting that depth in her mental health issues, is a problematic attempt to get players to accept Mae as “not so bad after all.”

2. It undermines how common depression and anxiety is.

The all at once or not at all myth is a big issue in the mental health community. One that people have been especially vocal about recently, with the goal or normalizing mental illness/increasing visibility. Chances are, if you’re reading this, you know someone who struggles with mental illness—whether you know it or not. Despite efforts to raise awareness, there are still many people who only think of people like Mae when they think of depression/anxiety. Which is to say they think productive people couldn’t really be suffering from depression/anxiety. This is not at all the case.

Night in the Woods, to its credit, also makes an argument debunking this myth. We see Bea running the store despite feeling trapped in life, struggling to take care of her household ever since her mother died. We find out Angus is incredibly kind but came from an abusive home. And we’re there for Gregg’s breakdown in the woods. Night in the Woods gives us rich, complex characters only to put Mae front and center: making the focal point of Night in the Woods one problematic, polarizing flaw.