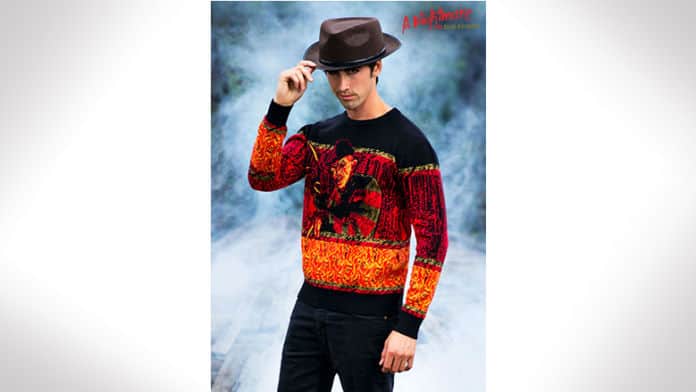 It’s a Nightmare on your street when you order this officially licensed Adult Nightmare on Elm Street Freddy Halloween Sweater.

Though not fashioned after Freddy Krueger’s iconic sweater, that doesn’t mean this comfortable article isn’t without the killer’s influence. The three-striped design creates a fiery-red scene for Freddy Krueger to shine in. Sporting his signature glove and hat, he’s ready to be released from the confines of his knitted design. You may be first on his list, so be careful not to fall asleep. It’s not an easy task, especially considering how cozy this licensed clothing is.

The colorful ugly Halloween sweater features three banners that the iconic villain spreads himself across. A solid black top third gives way to a pattern of bloody drips and smears as the perfect backdrop for the killer of Elm Street. Beneath that, just above the elastic waist, is an inferno of faces. The haunting depiction of a nightmare world may be enough to deter many from slipping into this unique sweater.

Rib-knit bands at the wrist, waist, and neck keep you encased in Freddy’s grip. Then again, it may just keep you comfortable and warm on a cool, overcast day. The sweater is made from 100% acrylic and features a knit-in graphic of Freddy Krueger wielding his deadly glove. Freddy is depicted in frightening detail that’s sure to send the kiddies running and draw in horror fanatics.