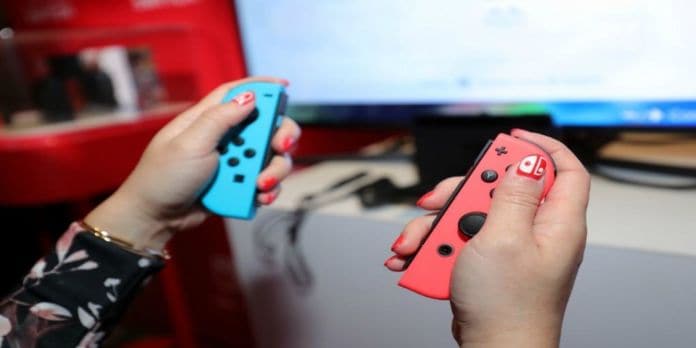 Like many gamers, it’s my third week with the Nintendo Switch. And so far things have been great. I’m enjoying the versatility of the console and, although the library is small, I have enough to take up my gaming time. I’ve spent the last 2 weeks purposefully experimenting with the controller set-ups and the results have been pretty surprising.

For the purposes of this article I’ll be discussing the “ways to play” that are available from just buying the console itself. This means I won’t be discussing the Pro Controller, which I hear from many is the best way to play.

It’s not news, but it still surprises me how you can use any type of controller with any type of visual set-up: from using the joy-con grip with tabletop mode to using the individual joy-cons as controllers while the Switch docked. There are so many options. 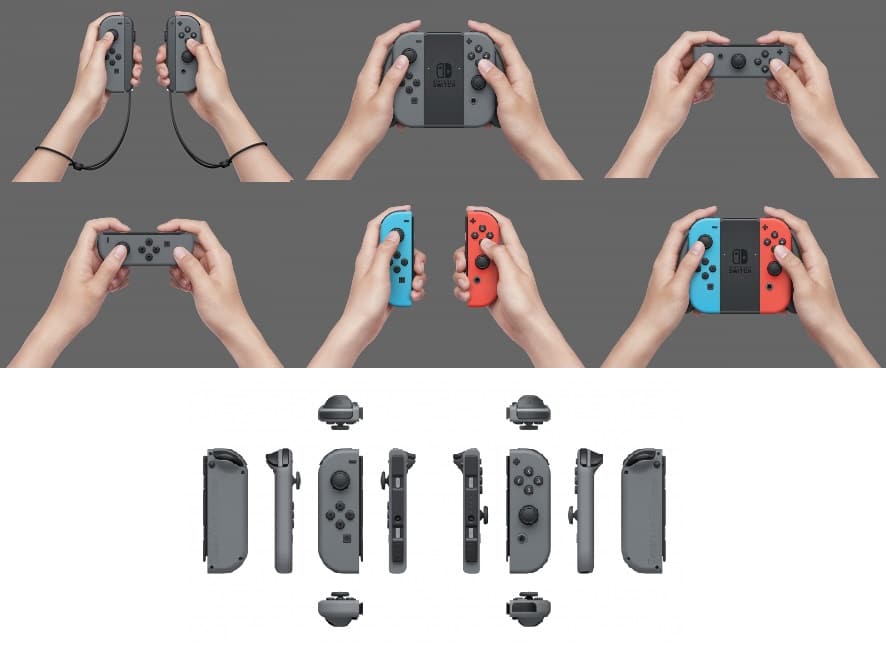 One of the things I love most about the Switch is that there’s so much to talk about. Regardless of whether Switch talk makes you nerd out or makes your eyes roll, you have to admit—it’s an interesting device. Personally, I love explaining it to newcomers and talking to fellow owners about their experiences and play style preferences. I recently lent my friend my Switch while I was at work and gave her a quick run through of the device. I used the proper terms I’d learned but sprinkled in a few terms I actually use because they just make more sense to me. For instance, I taught her how to remove the joy-cons and go from handheld to docked mode, but I also referred to the joy-cons as “the little nubs.” Likewise, the joy-con grip was “the controller shell.”

Other members of the NerdMuch team have developed their own terminology as well. (Christine’s description of the joy-con grip as “the sliders” is adorable brilliance).

But terminology aside, let’s look at how this works in practice:

Personally, I’ve mainly been playing the Switch in handheld mode. Having always been a fan of handheld games the Switch is a dream come true for me. Often when we discuss handheld gaming we talk about commutes and killing time before movies or meals but for me that’s rarely the case. Most of the time I’m using a handheld I’m just sitting in my living room or laying in bed watching T.V. I think that’s the case for a lot of people but it’d make for less exciting commercials.

Still, I am a commuter and the other day I had a good opportunity to take on some shrines in Breath of the Wild while waiting for the bus. The idea may still be repulsive to some gamers but I thought it was so cool to be playing console Zelda on the go. 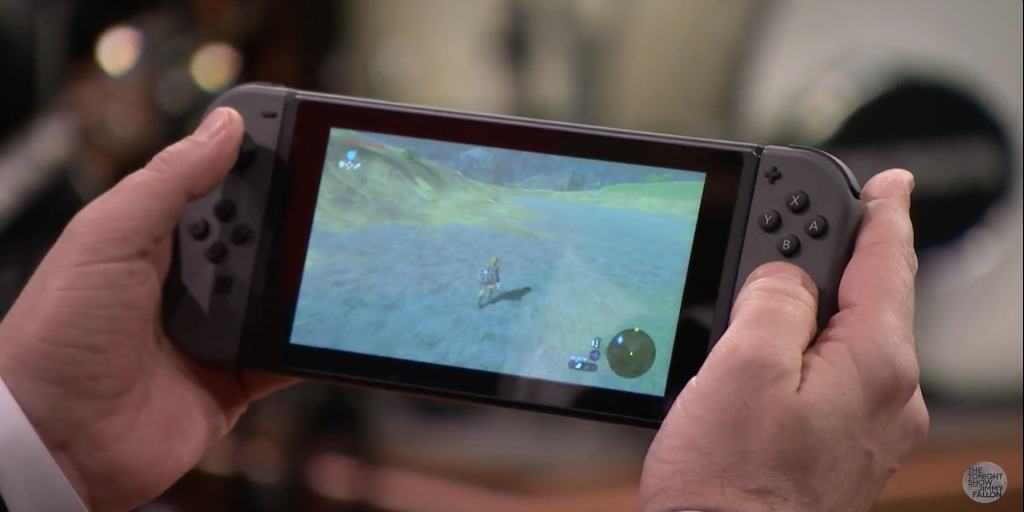 Visually the Switch is stunning even in handheld mode, making it hard to pick up my 3DS (why can’t you look this good??).

Since I bought the grey Switch I felt decently comfortable using it in public because it draws a bit less attention. Still, I was extremely cautious as I sat on the bus stop bench near a puddle (just my luck). And while I was able to get into the game more than I expected in the back of my mind I was still ready to fight anyone in real life who tried to pull something. It is worth noting that, as a woman in a big city, I’m always on some level of alert. So while commuting alone, on public transit, with a Switch can be fun it isn’t relaxing to me this early on in its existence.

Another issue I ran into involved the *motion control aspect. Since moving the Joy-Cons can also move, say, the direction of your bow, a rocky bus ride is a harsh reminder that you’re on the CTA and not—in fact—in Hyrule. *This issue can be remedied by going into the settings and turning that off but the bus is still pretty unforgiving.

Aka the dog controller. 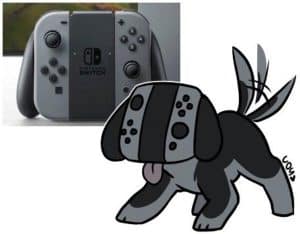 This is a solid controller. As a fan of diagonal joysticks and smooth finishes, I enjoy this controller but it’s not groundbreaking. It’s the least exciting part of an otherwise really interesting console.

I tested this out of curiosity. Plus, I’d wanted to demo Snipperclips for some time, at that point. This seemed like an easy way to kill two birds with one stone (or one stone that can be divided into two stones in this case…). 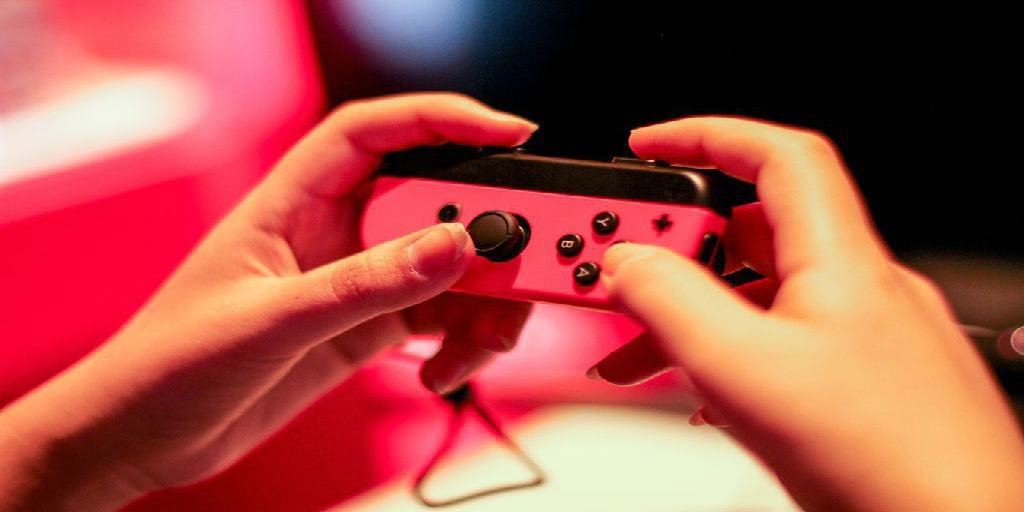 I was shocked by how well these worked. When I first saw this set-up advertised I figured I’d never play this way; now, it’s second nature to me. But the pleasant in game experiences can include some pre/post-game complications.

The first place things can go wrong is when you’re sliding the joy-con wrist strap onto the joy-cons. Admittedly, it’s fairly simple as long as you line the joy-con and the strap up properly (+ with +, – with -). However, if you mess this up they will become incredibly stuck which is exactly what happened to me the second I got my Switch. I was excited and thought “surely you couldn’t fit these on at all if this wasn’t the correct way.” This proved to be incorrect… but according to the YouTube search results I was not alone in this error.

Even when placed on correctly, removing the wrist straps becomes its own ordeal. The bottom of the Joy-Cons have a tiny “lock” switch that I almost always forget exists. This can become an issue when it’s time to remove the Joy-Con wrist strap because you may end up attempting to slide it off while it’s still locked. The placement of the release button is one of the most frustrating aspects of removing these tiny triggers. I understand the release button is placed there so you can add/remove the Joy-Cons from the docked console (and it’s great for that) but when you’re dealing with something as small as the Joy-Con and its equally small strap, it’s awkward.

I often end up pressing the ZL/ZR buttons by accident while trying to remove the wrist strap. Other buttons can get pressed as well which causes random screenshots or selecting things I don’t want to select. Lastly, I will say that the Joy-Con wrist straps are a little hard to take off and when I do remove them it feels like I’m about to snap something off completely. But maybe I just have a stiff set of Joy-Cons.

Human errors (and debatable design flaws) aside, a Joy-Con makes for a surprisingly comfortable controller. The only issue I ran into, gameplay wise, was communicating the controls to the other player. One person has a joystick and arrows while the other has a joystick and letters. Personally, I’ve navigated this by referring to both sets of buttons as the D-pad. Its been pretty effective so far.

There’s something wonderful about sliding off the Joy-Cons, sitting in front of the T.V, and cranking out some Binding of Isaac with a friend. And god, I can’t wait to pass a Joy-Con over for a round of Mario Kart. While I strongly disagree with those who feel the Switch “basically comes with two controllers because a Joy-Con can be used as a controller,” I have to admit it was nice to be able to do some multiplayer without having to drop another $70.

My last comment is a small one but it threw me through a loop when I was still figuring out the Nintendo Switch. Having started with Snipperclips, I was confused when the Switch didn’t automatically recognize the Joy-Cons as two controllers rather than two parts of one controller. Snipperclips did this; but the same wasn’t the case when I tried to play The Binding of Isaac’s co-op mode. All you have to do is go to controllers > change grip/order and then click the top triggers before launching the game but it took me a hot second to figure things out.

A Joy-Con in each hand

The other night I was particularly exhausted, fairly early in the evening. I had woken up early that day to catch a cheap movie showing, went grocery shopping, and even got my ran 3 mile workout in. The fatigue and laziness was so real I didn’t even want to pick up the Switch. So I did something I thought was even more ridiculous than using the joy-con as a controller: lying down with a Joy-Con in each hand. 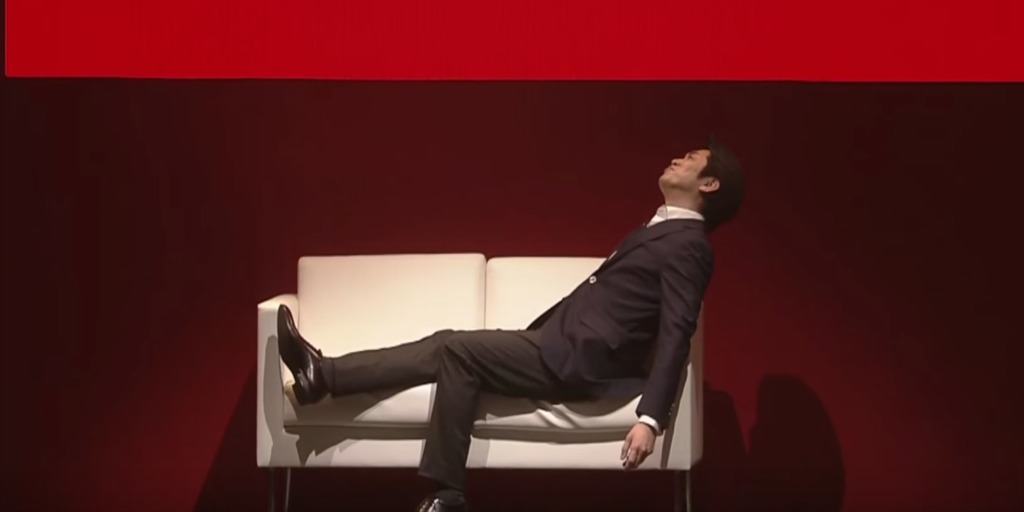 Once again, this bizarre set-up was a success. I wasn’t as skilled as I am with a more traditional set-up (i.e handheld mode or using the joy-con grip) but it worked. I felt like I was in a weird dystopia as I laid in bed with the Switch console propped on my lap with the support of a pillow pet as Cheers played in the background… technology has completely taken over I thought as I drifted out of consciousness, a Joy-Con in each hand.

Seriously though, it was pretty nice. I think this is going to revolutionize my sick days.

All of this is to say, it feels like Nintendo finally got things right. The Joy-Cons feel natural in a way that the Wiimote and Nunchunk never quite did. The Wii’s controller(s) gave us something new that didn’t quite click with the hardcore market. But the Switch takes something old (a typical controller) and presents it in a new way (able to be split in half). Similarly, the Gamepad’s offering of remote play was great but limited in reach and the design was a bit bulky. Now we have a sleek console that can go anywhere. With the last few gens of Nintendo hardware there was always something a bit off and while I voiced some critiques above I love these Joy-Cons.

The Wiimote and nunchunk… the gamepad… all these ideas were building to this moment. And I have to say, it feels good to be here.

Previous articleE3 2017 Predictions: 18 Bold Moves For Sony, Microsoft, Nintendo, & More
Next articlePower Rangers Review
Janet Garciahttps://www.youtube.com/channel/UCnfZ6eVYE4X2dzDixD5cNrw/featured
Janet Garcia is an editorial writer with bylines at IGN, Kotaku, and more. Her favorite genres are platformers, puzzle games, and simulators but in reality she spends most of her time playing FIFA tournaments in her apartment.