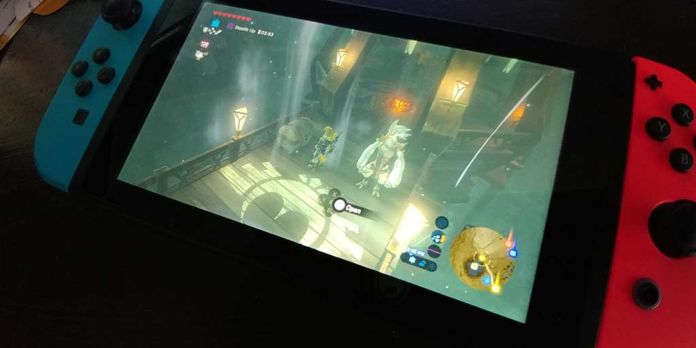 There’s no denying that Nintendo consoles have been aimed at a certain type of gamer in the past, but when the Switch was announced, it appeared to also excite the “hardcore” gaming crowd as well as those who find themselves playing every new Mario that hits. Within minutes of pre-orders going live, the Nintendo Switch sold out, and it remains sold out as of writing this Switch review. But does the hardware live up to the hype?

While the Switch has its flaws — and we’ll get into those, too — it has a lot of aspects that are well worth praising. First, and most obvious of course, is the fact that you can both play it on a television or take it with you on the go. Gone are the days of having to choose between a handheld console and a home console, or having to be tethered to your home to play quality video games.

With the Switch, switching between a television screen and the handheld itself are as seamless as the advertisements make it look; plugging your handheld into the dock instantaneously renders your game on screen, while removing it displays the game right on the 6.2″ screen with no delay. 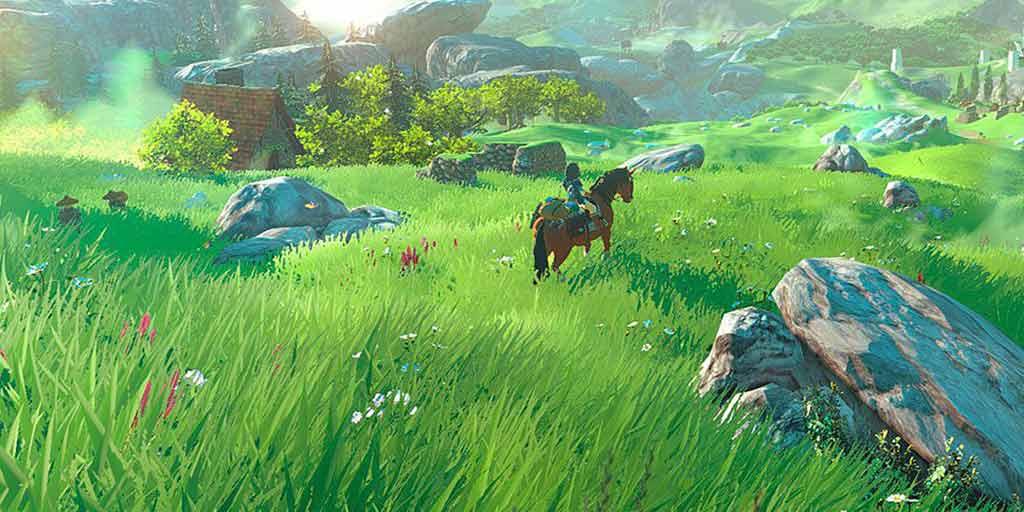 Our second bit of praise for the Nintendo Switch comes from its surprising power and performance. Here we are, a week after the Switch’s release, and we have very little to complain about regarding its performance. Its current best game, The Legend of Zelda: Breath of the Wild, looks great on both the handheld and a TV, and there are very few framerate issues. In Fast RMX, the Switch’s second best-looking game at launch, there wasn’t a single dropped frame, and what’s being rendered looks clear, colorful, and detailed.

As far as how the Nintendo Switch looks, itself, our only complaint is that we would have liked more color options or even skins. Nintendo’s missed opportunity to allow us to customize our Switch to make it our very own isn’t much of a surprise, as they’ve ignored basic requests by their fanbase for years. However, there’s still time for Nintendo to introduce a faceplate or skin of some sort to allow us to make the device look even better.

But what’s there looks good enough to have proudly displayed in your living room (or on a train), despite it being a plain design. The multi-colored Joy-Cons are a nice change of pace, but if you were one of the many that were too late to the pre-order party, you might be stuck with a plain-looking piece of hardware to add to your entertainment center.

The Joy-Cons have a soft plastic feel to them that make them more pleasant to hold than the hard plastic of the Wii remotes. However, when you’re holding a single Joy-Con in your hand and are trying to play with it, there’s no denying that it’s awkward and not ideal. As expected, the Joy-Cons are too small to hold comfortably, and after even short periods, our hands began to cramp. 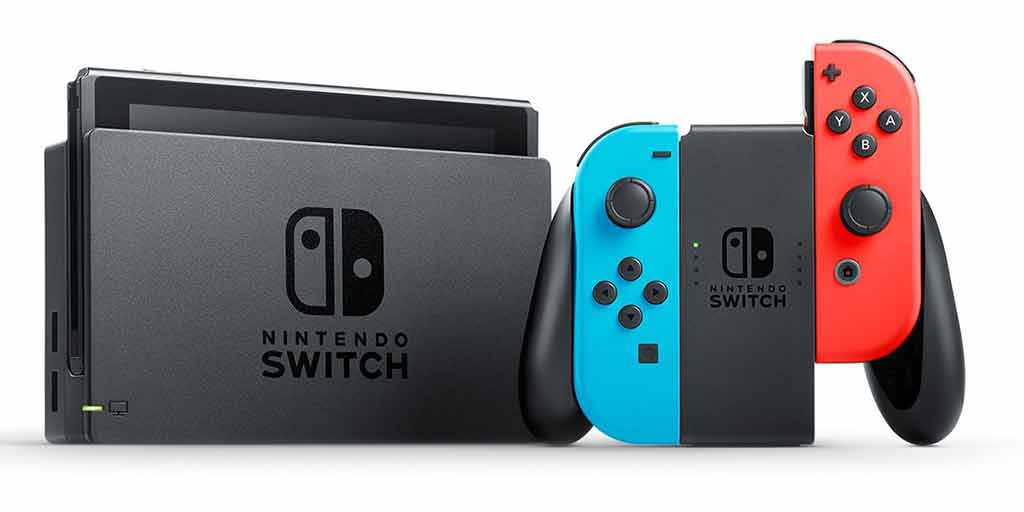 However, snapping the Joy-Cons onto the sides of the Switch not only causes the Switch to emit the delightful snapping noise heard in all of its marketing so far, but it’s also much more comfortable to hold. They’re also comfortable to hold when they’re connected to the included Joy-Con holder that turns them more into a traditional gamepad. Unless you’re Karen and you plan to take your Switch with you to parties, the uncomfortableness of a single Joy-Con isn’t a dealbreaker.

I should also note that the Nintendo Switch’s volume is surprisingly loud for such a small device, and although you won’t be able to fill your living room with its sound, you’ll have no problems hearing gameplay while you’re playing a game on the go.

The Switch OS and User Interface also deserve praise, as they’re super clean and easy to navigate. Finding the game you want to play and playing it is as simple as choosing the game and then selecting which user will be playing the game. This is a great change of pace that’s worth mentioning when both the PS4 and Xbox One user interfaces are overcrowded and confusing to navigate. Whether Nintendo is being intentionally simplistic or it’s just because there aren’t a ton of features at launch, the Switch OS is intuitive.

And then there’s the current line-up of Switch games, which at launch isn’t as formidable as it should be. However, with most having their heads into The Legend of Zelda: Breath of the Wild, nothing else would even matter, anyway. What’s more, Breath of the Wild is certainly a console-seller and is enough to entice many to purchase the Switch on day one.

Still, there are actually a few other games worth playing, including Fast RMX, Shovel Knight: Treasure Trove, and Snipperclips. If you haven’t already played I Am Setsuna, that’s also a game worth diving into, but chances are if it’s a game you were interested in you’ve already played it by now. However, that’s basically it — at least for now. We know there are already quite a few upcoming Switch games on the way, although most of them have vague release dates. So, when exactly there will be more meat for us to bite into is unknown for now, but there are some exciting games on the way, at least.

It’s also clear that Nintendo still doesn’t know what the hell it’s doing when it comes to social interaction, as is shown by some of the poor design choices made with the Switch. The biggest misstep is the fact that it uses friend codes still, instead of giving users their own profiles (as is the case with every other system).

The second hiccup comes in Nintendo’s continued use of Miis, which haven’t been redesigned or received any update since the days of the Nintendo Wii. You’re still stuck with the same terrible-looking avatars that look even worse than what Xbox offers, and at this point it would have been better just to not include Miis at all than to present virtually the same designer we’ve been seeing for the past two consoles (save for a few added color options).

But those few shortcomings aren’t enough to deter purchasers from wanting a Nintendo Switch. Here we are a week after the Switch’s release, and we can’t seem to recommend it enough. Not only is it more powerful than our 3DS handhelds, but it can also hang with our other consoles. We’ll see how it holds up when the more graphically intensive games start coming out, but for now, what we’re seeing looks great.

In short, if you were to ask the majority of the Nerd Much? staff if the Nintendo Switch is worth it, our simple answer would be “yes”. The hardware, itself, is certainly commendable, and the only question right now is whether or not there are any games on it that you will want to play. We recognize that it takes a certain type of gamer to appreciate the games that it currently has available, but if you’re a Zelda fan, the Switch is a must-buy right now. If you’re not a fan of Link and his journeys of the past, you might want to hold off until there are some more games that appeal to you.

So, if you’re wondering where Nerd Much? stands on the Nintendo Switch, wonder no-more — we are all-in. The pros far outweigh the device’s cons, and we can’t wait to see the Switch catalog of games grow over the next few years.

Previous articleNintendo’s Handling of the Switch: Two Steps Forward, One Step Back
Next articleHorizon Zero Dawn and the Word “Savage”
Bobby Bernstein
Bobby is the co-owner of Nerd Much?. Bylines at Heavy, Den of Geek, HiConsumption, and More! Like his nerdtastic tweets by following @Thirstiestgamer on Twitter..