Okami HD Might Be Coming To PS4 And Xbox One

According to confirmed sources from Kotaku UK, Capcom will soon be porting the all time favorite game, Okami, to the PS4 and Xbox One. The game is currently on the PS3 and the Nintendo Wii, originally released on the PS2. It has yet to reach the Microsoft systems, so it will be jump indeed to see Okami reach so many consoles. 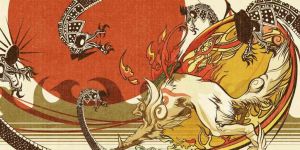 Kotaku’s sources state that this newer version will be out sometime this December. This estimation is in accordance to a listing from two separate European retail chains stating that Okami for the PS4 will arrive on December 12. The date it more likely a placeholder date, but it was listed by two completely unrelated retail stores.

Whether this is accurate information or not, it will be good to see the game reach even younger audiences. Those that may not have been able to get a chance to play the game on the PS2. That said, depending on how young you are, you probably already own a copy of Okami on the Wii, PS3, or its only sequel Okamiden on the Nintendo DS. Personally, I started with the DS version, because that’s the system I had. Later on, I acquired the game for the PS3 and happily explored the world before the great goddess technically died.

I did get stuck on Princess Kaguya’s water dousing mini game though. I’m terrible at timed activities. I was determined, however, as Okami is the game that converted me officially to the art of video games. Not only does the game tell a beautiful story, the traditional Japanese paintings inspire the graphics, as well as the history of almost every character within the game. Each are related to a Japanese legend or mythos in some way. Studying each demon or even setting (like the hot springs run by birds) is a whirlwind of Japanese history and mythology.

Clearly, I’m the type to spend more money on another copy of Okami if the graphics were updated to match, but are you? Is Okami a favorite that would be worth another buy for a new system? Let us know your thoughts in the comments below!