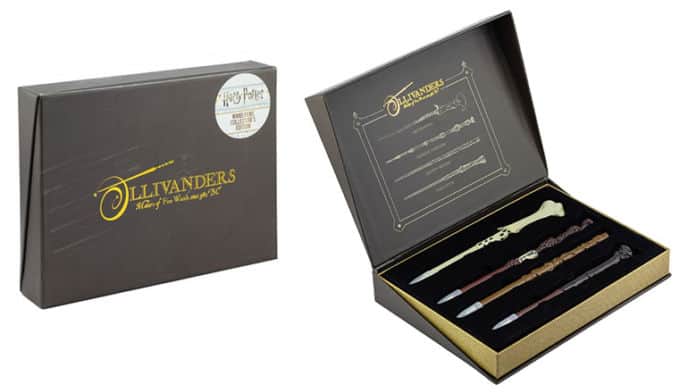 Put a spell on your next written assignment with this set of Harry Potter wand pens. With these expertly crafted, quality pens, other Harry Potter fans will ooze with jealousy when they see you jotting down notes with the very wand used by the Headmaster of Hogwarts. “The Wand Chooses the Wizard” Ollivanders Pen Set is the perfect gift for the aspiring wizard.

They say the wand chooses the wizard, but it looks like you’re the one making the choice. Will you follow in the footsteps of Harry Potter with his signature wand or be a bit more cautious and studious, like Hermione Granger? Maybe you’re a leader, like Professor Dumbledore, or are capable of wielding the wand of He Who Shall Not be Named. Whatever your personality, there is a wand in this set to fit it.

This 4-piece set features pens designed after the wands of Potter, Dumbledore, Granger, and Voldemort. Each pen comes nestled in a holder, which sits in a decorative box sporting “Ollivanders” logo. Harry Potter fans will delight in owning the wands of four of the series’ most prominent characters. 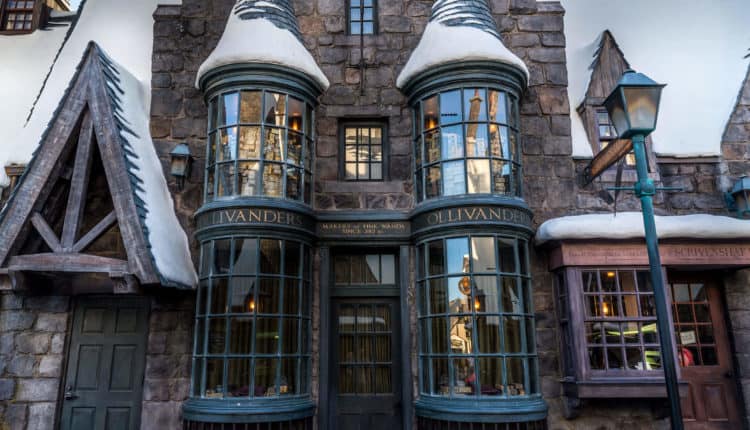 The wand pens are an officially licensed product of the Harry Potter universe. Intricate detailing brings each piece to life and lets handlers feel like they can cast Avada Kedavra with just the flick of their wrist. It’s as if they were ripped right out of the wizarding world and delivered right to your door by Hedwig.

The pens come with caps and are etched with incredible detail that matches the on-screen inspiration. Any Harry Potter fan will be able to easily determine which wand belongs to who without the help of the guide printed on the inside of the box.

You may not be a wizard, but you can certainly feel like one when wielding one of these high-quality pens. Get ready for your first wizarding adventure when you crack open this case of collectible wand pens from Ollivanders.