Once Upon a Time in Hollywood Review

Once Upon a Time in Hollywood is perhaps director Quentin Tarantino’s calmest and more endearing film. A director defined by stylistic action, witty dialogue, and tense moments, his newest movie may seem like a departure from his previous filmography. A love letter to a time period when Westerns dominated television and film, Once Upon a Time in Hollywood is a lengthy, but enjoyable ride. While it’s not the best movie in Tarantino’s library, its terrific performances, superb ending, and sharp dialogue make it a memorable experience.

At its core, Once Upon a Time focuses on the relationship between fading television actor Rick Dalton (Leonardo DiCaprio) and his stunt double Cliff Booth (Brad Pitt). With Rick’s popularity rapidly diminishing, the actor attempts to cope with the possibility of becoming a nobody. During all this, actress Sharon Tate (Margot Robbie) is making a name for herself and Charles Manson’s (Damon Herriman) cult following is growing.

This is the turbulent time period that we find Rick and Cliff attempting to navigate. It’s a fantastic backdrop that highlights the cruelty and unforgiving nature of showbusiness. Rick’s descent from A-List television star to one resigned to making guest appearances is deeply compelling.

DiCaprio sells the emotional journey that Rick goes through, as he tries to claw his way back to relevancy among his fans and colleagues. There’s a lot he has to balance, as the actor suffers from deep self-doubt despite his obvious talent. It’s hard not to root for him, as Rick is instantly lovable and almost has a childlike wonder about his entire profession. 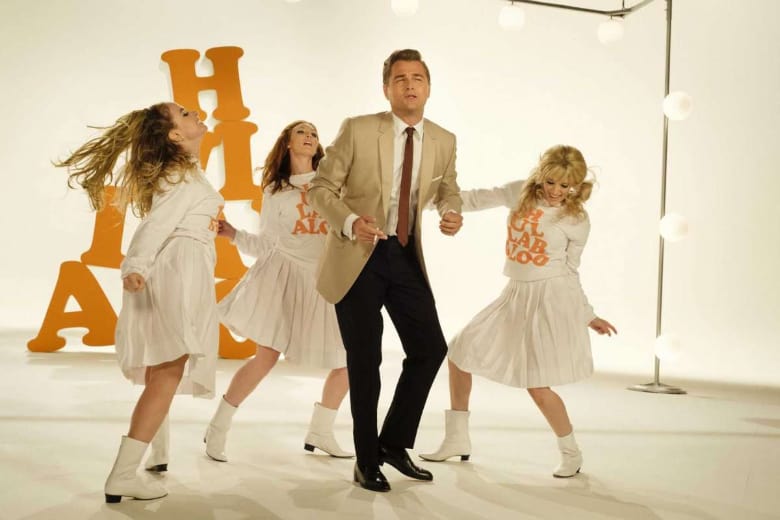 On the opposite end of the career spectrum is Cliff. A man accused of killing his wife who serves as Rick’s stunt double and closest confidant. While Rick still clings onto the flashy dreams of stardom, Cliff serves as our conduit to the grimy underbelly of Tinseltown.

Unlike Dalton, Cliff lives a less than lavish lifestyle despite his importance to the actor. It’s a thankless job that Pitt masterfully captures in his dreary ruggedness and steadfast loyalty. He’s like a brother to Rick and it shows thanks to the terrific chemistry between both actors.

Charles Manson’s cult also gets a fair amount of screen time, but instead of focusing on the patriarch, Tarantino aims his sights on the followers. There’s an underlying cruelness to the group that’s mashed with the flower power aesthetic and talking points. Once Upon a Time in Hollywood gives just enough information to make you wonder why these people are willing to follow this man without letting it overwhelm the story. They are background characters that simply add more emotional weight to the events and serve as solid antagonists for the duo, even if their appearances are pretty brief.

Where Once Upon a Time in Hollywood stumbles is with Sharon Tate. Even though this is certainly Rick and Cliff’s story, Tate feels like a complete afterthought. This wouldn’t be a problem if her relevance to the story wasn’t so glaringly obvious if you’re at all familiar with the events that happened in 1969. She randomly appears and disappears throughout the story with only a handful of scenes. Robbie does a fantastic job,  especially during a scene where she watches her own film in a crowded theater, but I just wish Tarantino spent more time developing her.

Instead, Tarantino has a bad habit of meandering through the second act, with some scenes going longer than they needed to be. It’s not that the script is weak, but some instances could have been shortened considerably. This is especially curious since the third act rockets by at a breakneck pace, giving the film a disjointed pace that can be jarring.

There are some terrific moments throughout, but Once Upon a Time in Hollywood takes its sweet time getting too specific locations or to conclude a scene.  Perhaps the highlight of these flashbacks involves Cliff sparring against Bruce Lee who is played to perfection by Mike Moh.

Thankfully, Tarantino makes up for it in an absolutely bonkers finale that you shouldn’t let anyone spoil for you. He makes a bold choice at the ending, especially once you realize the real-life events the story is built around. There’s a heavy sense of dread lingering over the polished, artificial surface of Once Upon a Time’s Hollywood. Tarantino masterfully walks the line between carving out his own vision and respecting the events that took place. Even if the entire affair is laced with a very dark sense of humor, especially towards the end.

Once Upon a Time in Hollywood is a solid film that is just shy of greatness. Even with a few weaker supporting characters and pacing issues, it’s impossible to not have a good time watching the movie. Cliff and Rick’s chemistry is infectious, with both men delivering emotionally charged performances that never go to over the top. Even though the final moments will be hotly debated amount fans, Once Upon a Time in Hollywood is a surreal fairy tale full of drama, humor, and a lot of celluloid film.