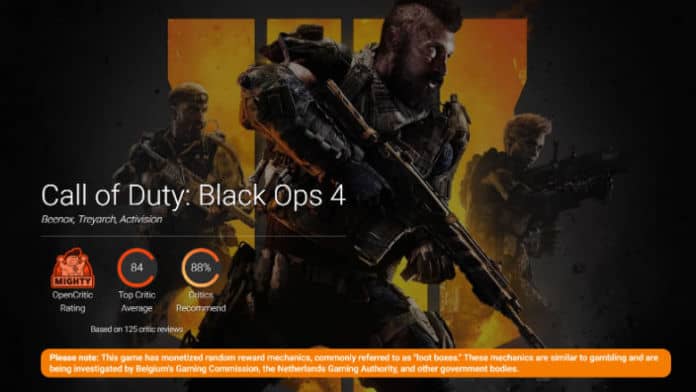 Back in late 2017, EA shook the video game landscape when they released the microtransaction riddled Star Wars Battlefront 2 and felt the wrath of the internet because of it. Fans finally had enough of the gouging mechanic and vocally pushed back.

The video game aggregate site OpenCritic too wanted to fight the incessant money grabbing technique. And they announced on their Twitter account that they were “going to take a stand against loot boxes” and were “looking into ways to add business model information to OpenCritic.”

Now a year plus later, the site has made good on their word. OpenCritic published an announcement today declaring that from now forward, they will be labeling games on their site that incorporate microtransactions. And they even go as far as breaking down in what way the practice is used.

When determining what OpenCritic deems is and isn’t a loot box, they look at three factors. First is whether the game contains unknown, random rewards. These transactions are ones in which “Users do not know what item they’ll receive prior to purchase. Instead, users are purchasing a chance to receive one item from a set of items.”

Second, OpenCritic will look to see if these random items are monetized. These are situations in where “Users are able to purchase the roll with real money, either directly or through an intermediary currency.”

And finally, the site will determine whether games encourage the use their microtransaction systems. OpenCritic defines this as “Users are encouraged to acquire and consume the loot box during the course of normal gameplay or game systems.”

OpenCritic goes on to explain that “this isn’t a claim that all randomization mechanics are negative.” The continue, “The Gwent system in The Witcher 3: Wild Hunt was a valuable addition to the game. Watch_Dogs and Red Dead Redemption (2010) both had gambling mini-games that were fun and immersive. Roguelikes thrive on randomization.”

Titles specifically mentioned as being flagged for containing loot boxes include Call of Duty: Black Ops 4, FIFA 19, NBA 2K19, Injustice 2 and Overwatch. But there are many others you’ll find with the designation across OpenCritic’s site.

The team at OpenCritic states that “It’s our mission to help gamers make informed decisions when considering a purchase or download. We feel that informing consumers about the presence of loot boxes is a key part of our mission.” Hopefully, changes such as this will lead to wider spread acknowledgment of the practice across the industry as a whole.