Nerd Much?
Home TV Orange is the New Black Season 4: What It Gets Right &... 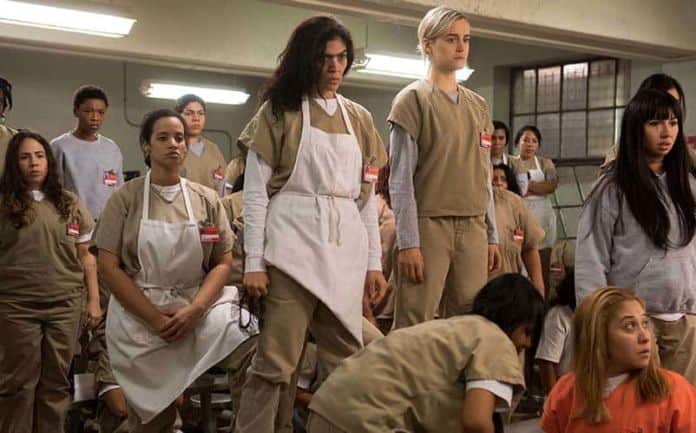 The latest season of the highly popular prison drama Orange Is The New Black recently aired on Netflix, and as we predicted when we first saw the trailer, it was a heavy one. After several intense binge-watching sessions and taking a day or so to process our thoughts, we are recovered and ready to talk about it. Based on sheer entertainment value, the season was a hit; but of course, nothing exists in a vacuum, and the season raised some important issues that need to be discussed. Trigger warning for rape, violence, addiction; also be warned that it contains spoilers.

Despite producers saying that they no longer wanted Piper to be the star of the show, she still gets a fairly significant amount of screen time in comparison to the other characters, especially considering how uninteresting her story is. Last season, she became unbearably obnoxious, and that continued well into these season as she “unintentionally” organized a white supremacist group because the Hispanic women stepped on her toes with the used panty business; she then proceeds to stand idly by as they commit hateful acts against the women of color. Most of Piper’s vexatiousness seems intentional; she is obviously meant to be the embodiment of white privilege; however, it seems that these new, openly racist inmates have been introduced solely for the sake of making her look better (because she doesn’t actively participate), so one has to wonder how much of it is actually intentional. 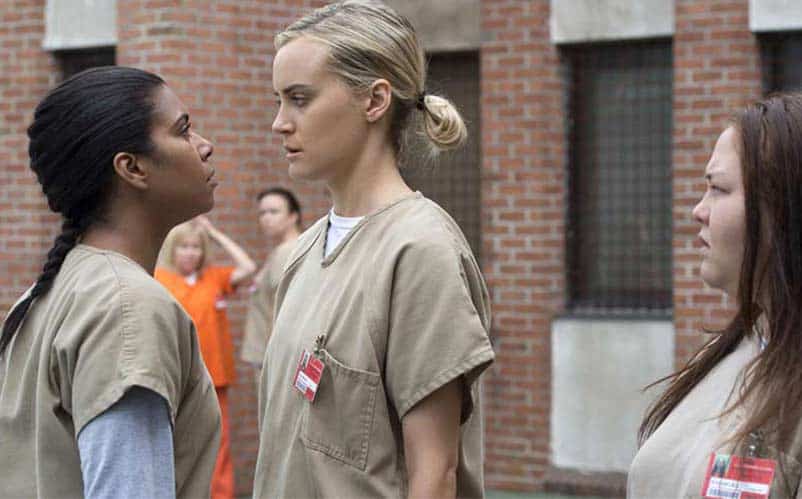 After all, the show has recently come under fire due to the fact that its writing team is almost entirely white, with exactly zero black writers. For a show that’s so ostensibly diverse, what does this mean? It means that, although they tried to reference many recent, culturally relevant topics and events (such as Black Lives Matter), they inevitably did so through a white lens – and it shows. Whenever white people include include people of color in their creative works, or echo events such as the tragic killing of Eric Garner, it almost always comes off as self-congratulatory, and this is no exception. The more complex story lines and relationships are generally attributed to the white characters, as well as most of the show’s time, and the black characters exist mostly for comic relief.

I write this as a white person, so take it with a grain of salt; for a black person’s account of this season, read this eye-opening blog entry by Ashleigh Shackelford on Wear Your Voice (link no longer live, unfortunately) — Ashleigh articulates these ideas in ways I never could; mentioned in the article, among other things, is the fact that there are zero intraracial relationships on the show apart from white ones.

This season spends an inordinate amount of time trying to make the audience feel sympathy for the (white) aggressors. It explores the backstory of the loathsome Sam Healy, and tries to help us understand the root of his misogyny, as though that makes it excusable; he takes a special interest in Lolly because she reminds him of his apparently Schizophrenic mother, and devotes himself to helping her, as though this redeems him somehow. We are made to understand what a nice guy the guard that murdered Poussey is, as well as Pennsatucky’s rapist. We see Piper cry and play the victim after she faces the consequences of her racist actions (which have a very real effect on Maria); in fact, the show spends far more time on the remorse of the aggressors than it does on the victims’ aftermath. Perhaps they are trying to show how people of color often face harsher consequences than white people for the same crimes, however, they also demonize Maria in more subtle ways while trying to garner sympathy for Piper.

The show does examine the realities and consequences of addiction and rape, and although these things are only discussed within the white inmate population, it does a better job than most shows in dealing with rape. It continues to show the profound effect on the victim well into the new season, although the act occurred last season; it also takes into account the fact that approximately 60% of sexual violence is perpetrated by prison staff. Although it may have focused too much on the rapist’s motives and remorse (and also indicated that rape is based on attraction, which is patently false), it did demonstrate that seemingly nice guys can be rapists, and that there is no such thing as a “perfect” victim. We also see Nicky’s return and subsequent relapse, and thus the realities of how addiction and detox are dealt with in correctional facilities (which is to say that they generally aren’t). 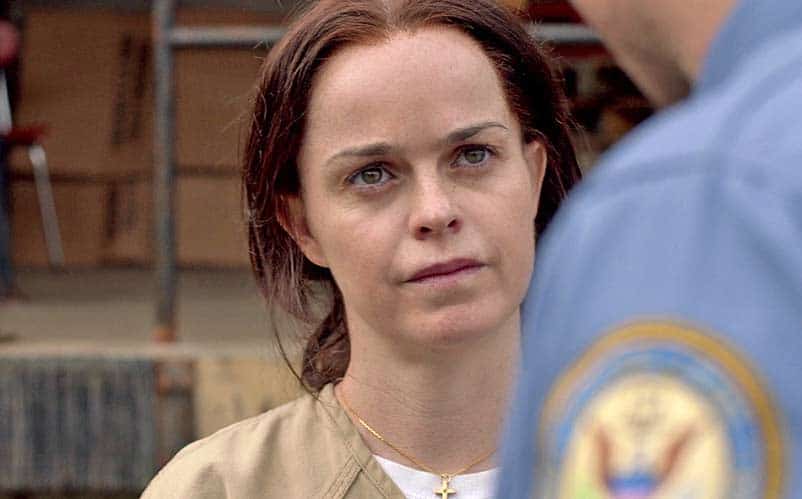 Also addressed are the issues of prison overcrowding, for-profit prison corporations that treat inmates like a commodity, and the inhumane treatment of prisoners. I’ve always enjoyed that aspect of the show; there seems to be a rampant lack of empathy for prisoners in this country in particular, and Orange Is The New Black transforms faceless, theoretical inmates into people with complex lives and stories and feelings (however imperfectly). Their helplessness when their peers are mistreated to the point of torture and even killed undoubtedly echoes the feelings of very real inmates across the nation. That a couple prisoners killed a guard in self-defense and were forced to hide it because they’d never be believed is plausible.

The beginning of the season has the audience rooting for Caputo, who seems to be the only person on the side of the inmates; he remains somehow ignorant of their plight for most of the season, and so can almost be forgiven, but then he lets them down in a big way in the end. Also, I can’t be the only person was deeply disturbed that he was actually aroused by the sight of Linda with a gun trained on Crystal Burset (even after he specifically asked her to let him handle it). Again, this is undoubtedly meant to echo the times we live in, but the result was just majorly unsettling. I had high hopes for him when he decided to go off-script for the press statement at the end, especially after his phone call to General Washington (which, again, seemed meant to redeem him), but was ultimately disappointed. When his superiors were trying to negatively affect Poussey’s portrayal, which is of course something the media has come under fire for in numerous recent events, he did defend her; however, the message the show ended up sending was this: her death is sad because she was a “good” black person, and therefore didn’t “deserve” to die. 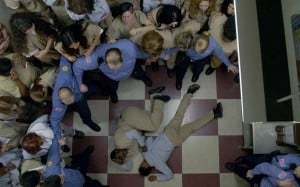 The decision to kill Poussey, of all characters, was very intentional and is very telling. The amount of time spent on her backstory in the last episode was meant to show her innocence, and therefore make her death sadder to the white portion of the audience. She wasn’t a violent offender or drug dealer; she was educated, with a military background, and this is calculated to make her death that much more tragic. As mentioned, they were clearly trying to evoke the recent and highly publicized police killings of black citizens, as well as the Black Lives Matter movement; however, without realizing it, the writers ended up unwittingly affirming the culture of white supremacy by engaging in respectability politics, which is what happens when people of color are not involved in the creative process.

If I had to use one word to sum of this season of OITNB, it would be apologist. Although I admittedly binge-watched until my eyeballs bled and enjoyed it immensely — even cried in several places — I’m reminded after the fact that there are issues that can’t be ignored; that if the show is going to touch on certain subjects, it needs to do so in a far more responsible way. I’m also reminded that I have the luxury of not noticing these things until a person of color points them out to me, and it’s at that point that I have a responsibility to take those things into consideration. It’s for that reason that I opted not to do a straightforward review or give Season 4 a numerical rating; rather, I hope to invite discussion and provide some food for thought. It’s easy to get sucked into such a dramatic show that seemingly addresses biases (therefore appealing to your conscience),  but that simultaneously plays on our internalized ones. I will more than likely continue to watch, as I’m sure many of you will, but hopefully with a more critical eye in the future.