Why Overwatch Deserves Our Game of the Year Award 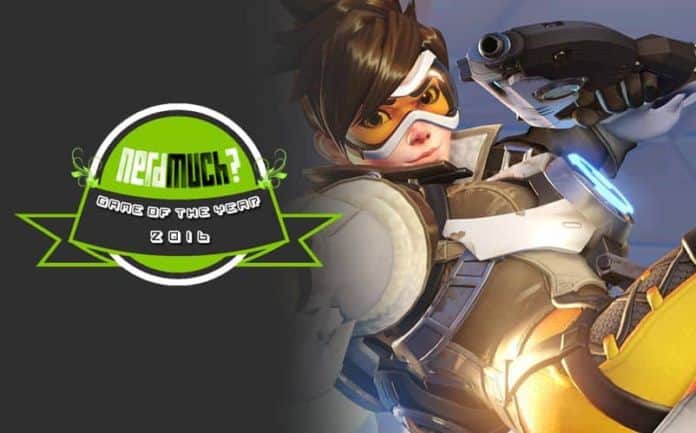 Looking back at the landscape of new games 2016 brought, I’ll have to first note that there are plenty of Game of the Year contenders. In fact, we’ve had internal battles over what game we feel deserves to be called the Official Nerdmuch.com 2016 Game of the Year. We’ll get into our honorable mentions a bit later on in this post, but after a long process of voting on and discussing our game of the year nominees in the office, we’ve picked the same game many other outlets (and even the Game Awards) pick as their GOTY: Overwatch.

Blizzard’s newest IP is undeniably a hit, and that was immediately made apparent when the game released in May. The game does a lot of things right, and very little wrong, and not only is Overwatch simply a great game, but it’s a great game that significantly changed the multiplayer gaming landscape. Players left other games in droves to make Overwatch their most-played game, and they entirely ignored games from well-known studios that would have probably otherwise done some pretty big numbers (looking at you Battleborn, Paragon, and Paladins).

Here’s why we believe Overwatch deserves our 2016 Game of the Year Award:

All the Things Overwatch Does Right 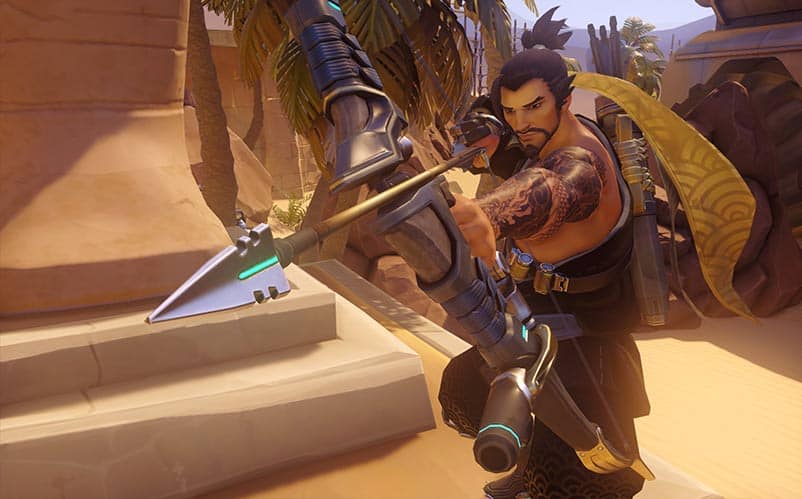 The most immediately noticeable plus for Overwatch is its brilliant art design. Overwatch‘s environments are all vibrant and colorful, and they’re highly detailed. What’s more, each map has a lot of little details scattered around for players to ingest, including some of the game’s lore (like future characters, concert posters, etc). As far as characters are concerned, they all have their own very unique aesthetic that somehow makes them all look great individually and as a team.

A Variety of Characters and Archetypes

One of the biggest reasons behind Overwatch’s massive success is in its character design, and if these characters weren’t all filled with their own personalities, the game wouldn’t be as popular as it is. But the undeniable appeal of the game’s roster is its strongest asset. First, the roster of characters is the perfect size; it’s not too big as to make it overwhelming when choosing a character, but it’s also not too small so that there aren’t at least a few good options every time. Secondly, the personalities of these characters all speak to different types of players. Their many quips and verbal exchanges helps to give each character a persona, and there is a wide range of different types of personas to choose from. Want to be an intelligent gorilla? Pick Winston. Are you the strong silent type? Check out Hanzo. Want to be the anti-Iron Man? Play as Pharah. Want to be a miserable bastard? Pick Reaper. Those are just a few examples of the variety of characters that Overwatch has to offer.

The game also appeals to a wide range of different playstyles, thanks to the game’s many different archetypes. Tanks like Reinhardt and D.Va allow players to protect their teammates while still being able to get their fair share of kills, explosive damage dealers like Pharah and Junkrat make it so that you don’t have to have perfect aim to get on the scoreboard, Snipers like Hanzo and Widowmaker appeal to those who prefer to sit back and be patient for kills, and there are varying types of healers in the game that can either heal one target or AOE heal. So whether you like to deal damage, protect your friends, heal your friends, or play as a lone gunner, there are many different options for many different player types; it’s this sort of mass appeal that is the leading factor in Overwatch‘s success.

If you’re another developer or publisher, and you’re wondering why Overwatch merchandise is flying out of online retailer’s warehouses, it’s because of the strong likability of the game’s characters.

Easy to Play, Tough to Master 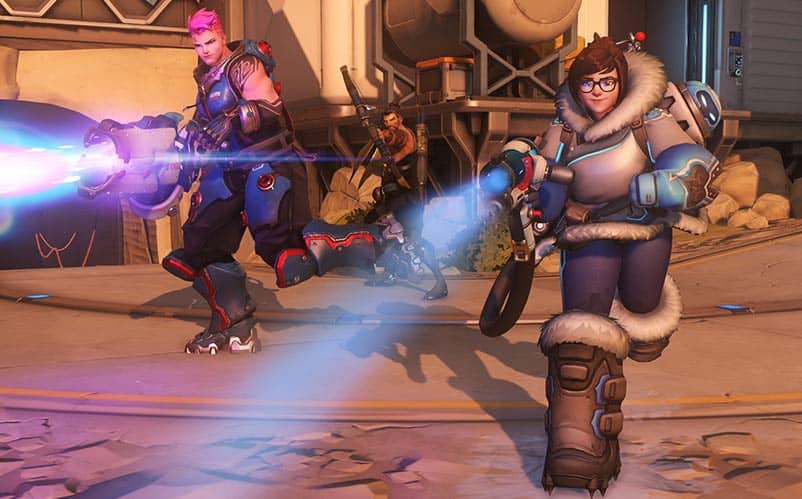 The second biggest factor in Overwatch‘s popularity is the fact that it’s such an easy game to pick up and play, but it’s a tough game to master. It’s accessible to those who typically aren’t good at multiplayer games, largely thanks to the fact that not only is it available on consoles, but also on PC. What’s more, PC players can use either a keyboard and mouse or a console controller. And, the varying graphical quality options in the game means that even those with older gaming rigs — maybe former World of Warcraft players — are still able to jump in and play, and Overwatch will run just fine on the lowest settings.

It also helps the game’s accessibility that each player has a varying difficulty, and there are websites dedicated to giving you all of the information necessary on every character.

While the idea of Loot Boxes isn’t anything new, the fact that Blizzard included them in the game with the possibility of cool skins, sprays, emotes, and poses is a big reason why many people can’t stop playing. Gamers LOVE to collect things, and doing so in Overwatch is passive and painless.

Blizzard is no stranger to holiday events, with World of Warcraft absolutely killing the holiday content game. And since its release in May, Overwatch has already had two major holiday events, with a third (and most exciting event) coming next week. These events add entirely new modes and limited-time skins and emotes, so it’s a great way to get players back into the game at various times throughout the year.

If you’re like me, you love browsing through Overwatch‘s Career Profile, which shows you an impressive number of varying stats. Who is your main? What hero do you never play as? What’s your average healing per game? How long do you typically spend “On fire” in a given match? You can find all of these numbers and so many more statistics while you’re waiting to get into a game.

In your career profile, you’re also able to view your achievements, as well as the achievements you have yet to earn.

What it Doesn’t Get Right 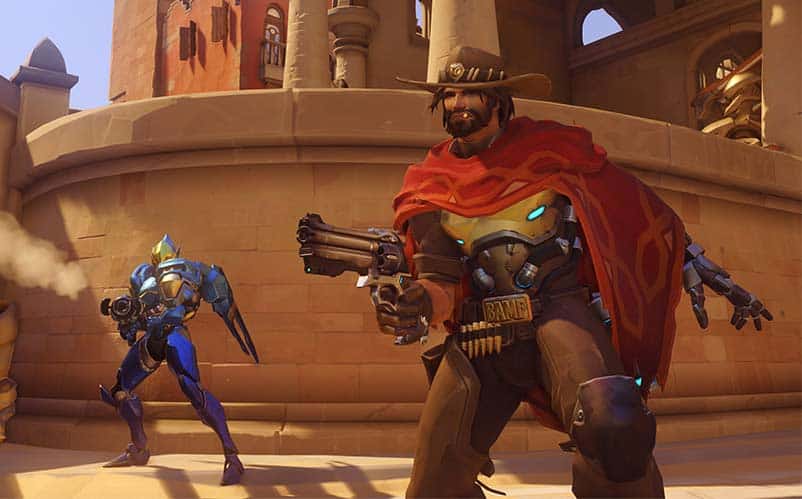 Just because Overwatch is winning our Game of the Year, it is important to note that it isn’t a flawless game, and we recognize that it has its minor issues.

It probably goes without saying by now that people want to know the whole story of Overwatch, and they want to unravel its mysteries through playing a single player campaign. Unfortunately, Overwatch doesn’t have one, although we wouldn’t be surprised if one were in development for release sometime next year.

While not entirely Blizzard’s fault, there is some toxicity that plagues Overwatch, especially on the PC version where players are using keyboards. Obviously, there’s toxicity in most games you’ll play online, due to the general nature of people on the internet. But where Blizzard is at fault is in their reporting system, which unfortunately provides no feedback whatsoever. Meaning, you can report a player for their nasty language and abusive nature, but you’ll never know what comes of that report, or if Blizzard has even seen it.

Why it Deserves Our Game of the Year Over FFXV, Uncharted 4 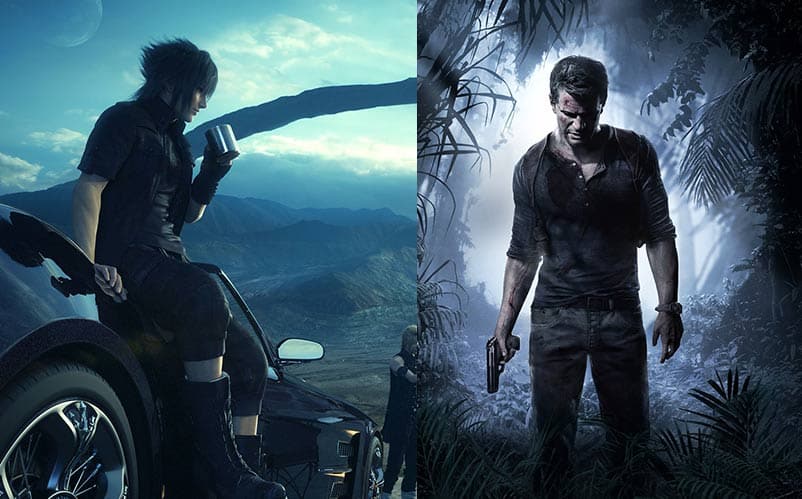 We really struggled when choosing between Overwatch, Final Fantasy XV, and Uncharted 4 for our best game of the year pick, but in the end, we felt we had to choose Overwatch over the other two really great games this year. Why?

Well first, Overwatch is an entirely new IP, and that gives it a few extra points in our book. Conversely, FFXV and Uncharted 4 are both a part of longstanding franchises. Of course, that’s not to say that they’re not great games — they are — but they don’t have that newness, fresh factor that Overwatch does.

Even Overwatch‘s gameplay has more new ideas than what FFXV and Uncharted 4 presented.

Secondly, Overwatch goes to show you that Blizzard can do no wrong when it comes to creating new games. Look at what Blizzard has done in every genre that it is in. With World of Warcraft, Blizzard still owns the space 12 years later. Action role-playing games? Diablo 3 is the best of them. RTS? Starcraft II. Collective Card Games? Hearthstone is the most popular. Even Heroes of the Storm was able to carve out its own space in the crowded MOBA genre. And now, Overwatch owns the multiplayer shooter landscape. We’d be fools to not mention Blizzard’s success.

While Final Fantasy XV and Uncharted 4 are both great, must-play games, they don’t do anything different; they’re just the top-notch option for their respective franchises. That’s well and good, but if they’re not doing anything new, are they really worth being called “Game of the Year”?

So for these reasons, Overwatch has been awarded the official 2016 Game of the Year Award from us here at Nerdmuch.com.

Stay tuned to Nerd Much? on Monday for our 2016 Indie Game of the Year pick and our defense of why we chose it.

Previous articleHaiku Home Smart Ceiling Fan: Wi-Fi Connected, Works with Alexa
Next articleHow To Live Smarter with IFTTT
Bobby Bernstein
Bobby is the co-owner of Nerd Much?. Bylines at Heavy, Den of Geek, HiConsumption, and More! Like his nerdtastic tweets by following @Thirstiestgamer on Twitter..