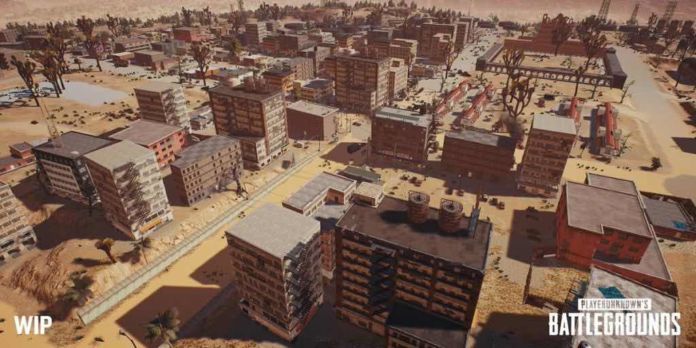 During a keynote presentation at Gamescom 2017, developer of PlayerUnknown’s Battlegrounds Brendan Greene (part of the developing studio, Bluehole) revealed a snapshot of the desert map. This map has been talked about for almost as long as the game has been in early access. We’ve had rough sketches and rumors abound, and admittedly the sketches look nothing like this picture. 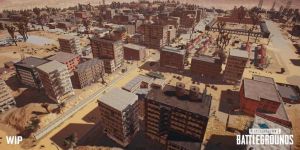 As you can see, the buildings on this map are just as abandoned and poorly kept at the rest of the buildings in the game. Everything is covered in dust and sand, including a stretch of road. So much so that the sand forms a trench at the end.

All buildings are a great deal more city-like that the country homes a player is more likely to encounter in the original game. Quite a few more floors to explore, and fire escape stairs to rush down in case of an emergency.There are plenty of parks and tall radio towers. The latter will hopefully be climbable with the new update that included the climbing mechanic.

In the far distance we can see a sharp cliff face, not unlike the grand canyon itself. It’s unclear if these will be climbable or function as an in-game barrier for those trying to runaway from enemies. Though one can argue that the white circle does just that on its own, but perhaps it is necessary for an as yet unknown reason.

Besides, if it is climbable, it would be easy pickings for a sniper in the right spot for all are either entering and trying to get away. Nonetheless, the level of detail this image provides is certainly promising whenever the map is released into the early access version of Battlegrounds.

If PUBG sounds at all interesting to you, I highly suggest it. It’s a great game if you have an audience for streaming or just want to goof around with friends. Battlegrounds is currently available on Steam Early Access and will be released as a full game late this year.