Nerd Much?
Home Games This is the Police Coming to Nintendo Switch 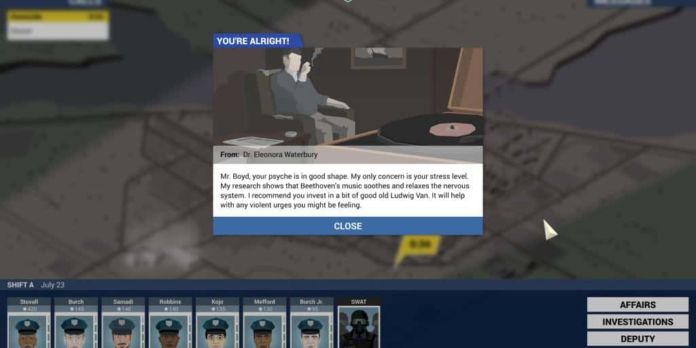 This is the Police is coming to the Nintendo Switch digitally October 24, 2017 and the physical version will be released in time for Christmas, December 5th, 2017.

According to the developers at THQ Nordic, the gameplay hasn’t changed from what it has been on the PS4 and PC. Meaning that unfortunately, there isn’t a co-op mode where a friend can pick up the other other Joy-Con and you can make more money together.

As mentioned, This is the Police is an indie game that has been on the PS4, Xbox One, and PC for about a year. Though no price point was given, you can be assured that This is the Police is quite the dark game. As the player, you take on the role of Police Chief Jack Boyd and it’s up to you to make $500,000 in 180 days.

It’s not a matter of putting up a bake sale either, the player must make decisions about the police department, “the bad guys,” City Hall, and a corrupt mayor. Whether you become corrupt yourself in favor of making a quick buck, is all up to you. Every decision in this game comes at a price and depends on what you’re willing to sacrifice to achieve your goals.

This game is also fully voiced by Jon St. John, known best for his role as Duke Nukem, a particularly nice bonus for an indie game. The man does a wonderful job and hooks you in with a kind of Noir Detective feel. The gameplay itself for This is the Police consists mostly of listening to that beautiful voice and clicking your way to the right, or wrong, decision. The outcome is all up the player’s own morals, there are no technically bad consequences, depending on what you consider bad.

As THQ Nordic points out, this is the 5th game coming to the Switch that has an M rating. Another big step for Nintendo to take on such mature titles, especially more recently like Doom and Wolfenstein. It’s been a surprising ride all around for the new console.