Prodigy Comic Coming from Netflix and Millarworld in December 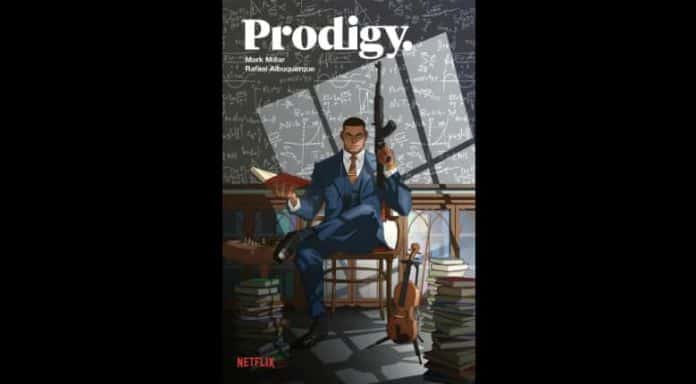 While the man has certainly got his hands full helping to adapt his works into series and films for Netflix, Mark Millar is clearly not ready to deviate away from his love of comics. His Millarworld banner has announced that Mark’s upcoming Prodigy comic will be hitting comic shop shelves in December.

Millarworld is now owned by Netflix following the company’s acquisition last year. Since their pairing, Millar’s Prodigy comic will be Netflix’s second comic that the company has released. Netflix publish Mark Millar’s The Magic Order in June.

Millar is once again teaming with Rafa Albuquerque to handle the art for Prodigy. With his new series, Millar stated that he set out “to write the smartest thing I’ve ever written and at the same time top any action set-pieces I’ve ever managed in the past and I honestly couldn’t be happier with how this has turned out.”

Here’s an overall summary of the upcoming Prodigy comic courtesy of Netflix:

“In Prodigy, the world’s smartest man isn’t content with running the world’s most successful business. His brilliant mind needs constant challenge and so he’s become the go-to guy for governments around the world when a problem arises they just can’t handle.

A Nobel-Prize winning scientist, a genius composer, an Olympic-level athlete and an expert in the occult, Edison Crane is as addicted to the mysteries of the world as he is to sitting at the top of the Fortune 500. These are the tales of the world’s most exceptional man and this story marks his first published adventure.”

Millar is heaping an enormous amount of praise onto his newest creation in Crane. The author, responsible for franchises such as Wanted, Kingsman, Reborn, Empress, Kick-Ass, and Jupiter’s Legacy, states that “Edison Crane is by far the best character I’ve created in my career”.

Previous articleWarning: Zombies Inside Front Door Cover by The Holiday Aisle
Next articleNo Plans for Obi-Wan Kenobi Spin-Off Says Ewan McGregor
Jeff Scott
Growing up a 90's kid, Jeff found his love for gaming during Nintendo's heyday. Because of that, you could (perhaps sadly) call him a "Nintendo Fanboy" to this day.