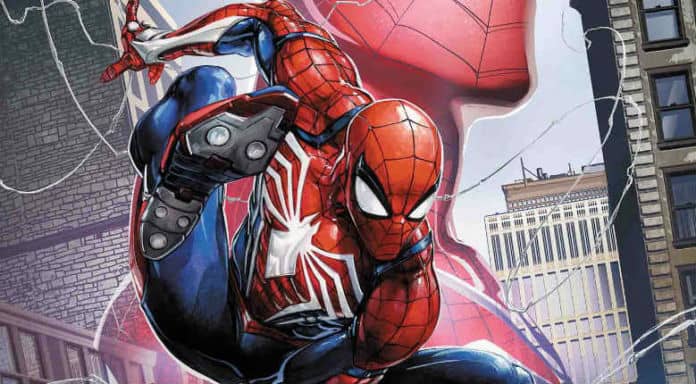 Marvel Comics has been teasing an upcoming comic event that the company has called Spidergeddon. It’s similar to 2014’s Spider-Verse in that the story will bring together over a dozen of the various Spider-Man entities throughout the various Marvel universes. However, in the teaser image, one of the characters remains mysteriously blank. But today we found out who the mystery web slinger was. It’s the version of the character in the upcoming Spider-Man game for PlayStation 4. 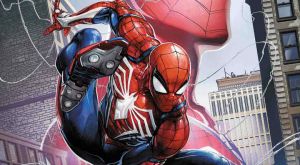 Insomniac’s take on the character will make his comic debut in September within Spidergeddon #0. The comic is being written by Christos Gage who previously worked on Netflix’s Daredevil and The Amazing Spider-Man series. Illustrations are being done by Clayton Crain who has previously drawn for Ghost Rider and Carnage.

Christos Gage spoke with Polygon and broke the news to them about the videogame Peter Parker’s introduction into the comic world. And Gage stresses that the inclusion wasn’t just for promotional means:

“Since I have been writing for the video game for the past three years (along with the ever-amazing Dan Slott, Jon Paquette, and Ben Arfmann), it seemed like a perfect time to bring that Pete into the mix. There are other reasons based in character that make some of the interactions between him and other Spider-folks really juicy and interesting, but I can’t say too much without spoiling the game. It’s great story fodder though — this is definitely not shoehorning a character in where he doesn’t belong. In fact, it seems like an important next step for him.”

Gage also went on to confirm that should fans pickup the comic before completing the game, they won’t have to worry about spoilers affecting their gameplay experience. “We’ll try to avoid huge spoilers for anyone who may read the comic before finishing the game,” the writer said. However, the events of the PlayStation 4 game will absolutely influence Parker and “will inform where Pete’s head is during the event.”

Sony and Insomniac’s Spider-Man swings onto the PlayStation 4 on September 7th. Marvel Comics’ Spidergeddon #0 lands digitally and physically in stores on September 26th.

Previous articleE3 2019 Dates Announced
Next articleNintendo Switch Family Showdown Coming to Disney
Jeff Scott
Growing up a 90's kid, Jeff found his love for gaming during Nintendo's heyday. Because of that, you could (perhaps sadly) call him a "Nintendo Fanboy" to this day.