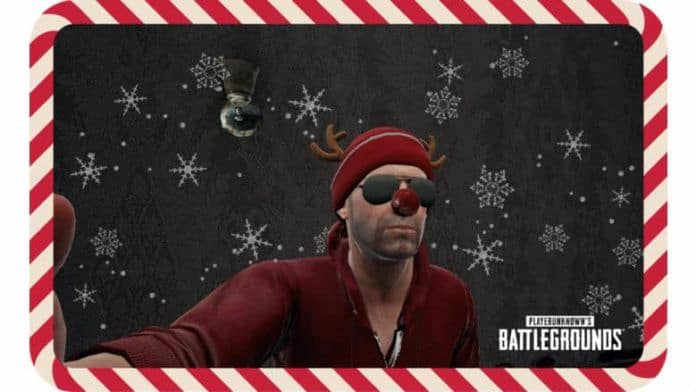 PUBG Corp. dropped an article on their blog earlier today detailing some PUBG festive holiday gifts for PC players. If you login during the month of December, you’ll be awarded a handful of items to get players into the Christmas spirit. However, it looks like Xbox One and PlayStation 4 owners can expect nothing but coal.

PC players booting up in December can expect a couple of PUBG festive holiday gifts. The first is a Festive Beanie that’s Christmas red with a red Pom Pom on top. There are also reindeer antlers sprouting out the sides.

The second of the two PUBG festive holiday gifts is a Red Nose that you can put on your character to complete the Christmas look. While using both the Festive Beanie and the Red Nose, you’ll be doing your part within the PUBG community to spread the Christmas cheer.

It looks like these PUBG festive holiday gifts are exclusive to PC players though. Which is, of course, unfortunate for the often lagging behind Xbox One players. The PlayStation 4 version of the game launches later this week as well and there’s no mention of the gifts coming to that console either.

PlayStation 4 owners do have an exclusive item coming their way too though. Those that purchase PUBG for PlayStation 4 will earn themselves the Pixel Art Parachute. It’s essentially an 8-bit version of the classic PUBG avatar atop a parachute canvas that is PlayStation blue.

The PUBG festive holiday gifts are eligible for PC players that login between December 5th and December 25th. You’ll then have access to the Festive Beanie and Red Nose for 30 days. However, should you complete “the mission” of reaching the top 10 ten times during the event’s period, you’ll get to keep the duo permanently.

There are a few other Christmas themed items that are available for purchase within the shop. Check them out and show everyone still playing PUBG that your bringing the chicken to Christmas dinner.