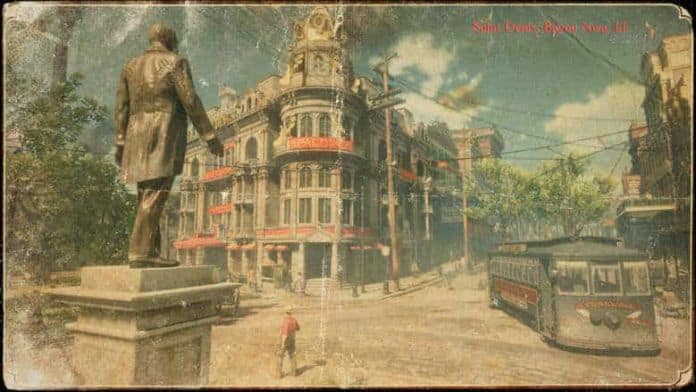 Rockstar Games updated their site today with details on a bunch of Red Dead Redemption 2 towns and frontiers that we’ll be traveling to. There are 7 included now, but you know there will be a ton more when the game launches in October.

First up is the Red Dead Redemption 2 town of Valentine. Described as “raucous” and “rough and tumble”, Valentine is located in The Heartlands region of the map. The town is known for its livestock auctions which attracts traders, ranchers, cowboys, gamblers, outlaws and prostitutes. Rockstar says that Valentine is the place to go “to make some money, raise some hell, and have a good time.”

Next up is Annesburg which sits within Roanoke Ridge. It’s a coal town that supplies locations up and down the Lannahechee River. It doesn’t sound like an ideal locale to reside though. Rockstar states that “working conditions are terrible for little pay, and many men have lost their lives down the pit.”

Saint Denis of Bayou Nwa sounds like a focal point on the map. One of the robust Red Dead Redemption 2 towns, Saint Denis is described as “a key gateway into North America with a trade route that runs the length of the country”. It’s said to be a melting pot due to the variety of traffic, with “businessmen, socialites, sailors, laborers, beggars and thieves all live side by side.”

Mount Hagen is a well known peak that sits atop the snowy Grizzlies of Ambarino. It’s the main pass through the western mountain range that connects to the Dakota River to the south. Quite opposite Mount Hagen is the warm southern town of Rhodes in Scarlet Meadows, Lemoyne. Rhodes is home to two at odds plantation families whom often take their differences to violent and deadly ends.

Strawberry is situated in Big Valley. Once just a small logging town, it’s new mayor is determined to turn the locale into a must see destination for wealthy tourists. The final Red Dead Redemption 2 town on display is Lagras of Baoyou Nwa, Lemoyne. It appears to be a swamp town with residents that are self sufficient and cut off, earning a living by fishing or acting as local tour guides of sorts.

We’ll likely get the breakdown of more Red Dead Redemption 2 towns in the future. With the game’s October 26th release little more than a month away, we should be hearing a lot more about Rockstar’s upcoming epic soon.

Previous articleNintendo Gold Points Can Be Exchanged for Nintendo Switch Online
Next articleThe Freeze Comic Announced for December
Jeff Scott
Growing up a 90's kid, Jeff found his love for gaming during Nintendo's heyday. Because of that, you could (perhaps sadly) call him a "Nintendo Fanboy" to this day.