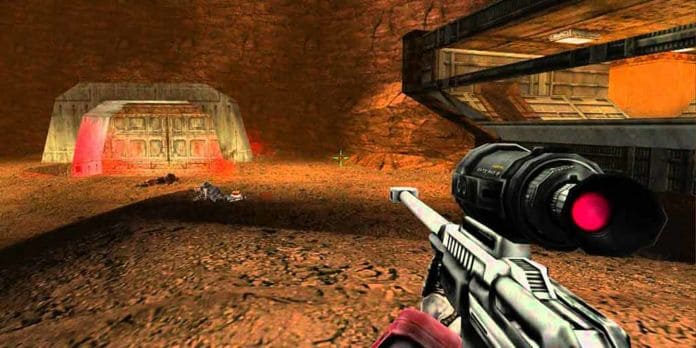 In the early 2000s, when I was a young, adolescent teen, my best friend and I spent hours and hours hurling fusion rockets back and forth at our symmetrically positioned bases in the middle of some red, Martian canyon. The map was called “Warlords”, the game, a science-fiction based first person shooter titled Red Faction (2001). 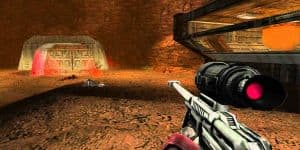 For those that have never played it, just picture Arnold Schwarzenegger’s Total Recall as a video game and you’ve got Red Faction. This game was unique at the time because it featured something fairly new to the gaming world: a near-completely destroyable environment. Containers, windows and barrels containing explosives (which looking back, were far too combustible for practical use) had been exploding on queue in various video games (see GoldenEye 007) for a while, but impact craters and/or crumbling walls was new territory at the time (to prove how bored and lonely we were as teens my friend and I used to see how far in the map we could “dig” with our fusion rockets).

But that was it, hours of entertainment from one game with no DLC, updates, or patches following it. 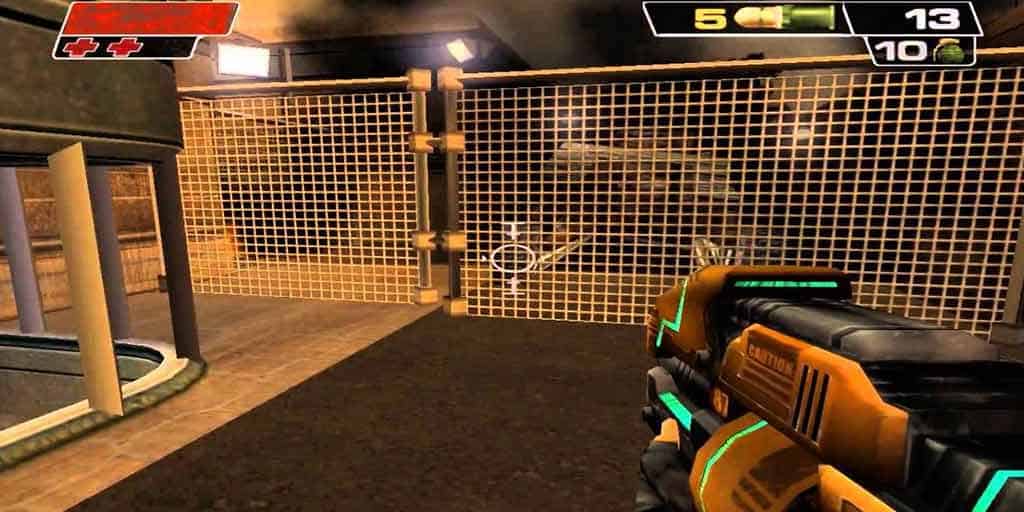 Back then if you wanted to experience more content, one had to buy the next game or sequel — in this case, Red Faction II. This is all in a time before high-speed internet and video game platforms combined forces to shape the gaming experience we have today.

Let’s fast forward to 2009, when THQ released another addition to the popular franchise, a game titled Red Faction: Guerilla on the PlayStation 3. The third game in the franchise featured a combination of an open world experience and destructible environments that were the foundation for a truly immersive experience. For me, this game was the embodiment of the grand-unifying theory of video games.

Now, my brother and I had been fighting over the controller for decades — maybe since we were born — and in 2009, when Guerilla was first released, that battle was reignited. But rather than bloodshed, we established careful parameters for how to negotiate whose turn it was. After each death (in the game, of course), we would switch. Clear, simple protocols that I’m sure many households and friendships established to maintain peace. This treaty, even though it was shaky at times, held up for the most part.

Now, I continue to digress from my point. We bought Guerilla as soon as it came out. After roughly 10 hours of gameplay in Guerilla, we had destroyed all of the EDF, the main antagonizers, and liberated the Red Planet, destroying bridges, military bases, and suburban Martian development projects along the way. I really can’t articulate well enough how fun those first hours were. But then, it was over.

The game did have quite a bit of replay value, however. The open world aspect of the game allowed for exploration, and more and more small scale skirmishes with the remaining EDF forces on the planet. However, the “war” was over, storyline completed, and there was no new content, so my attention shifted to other games. 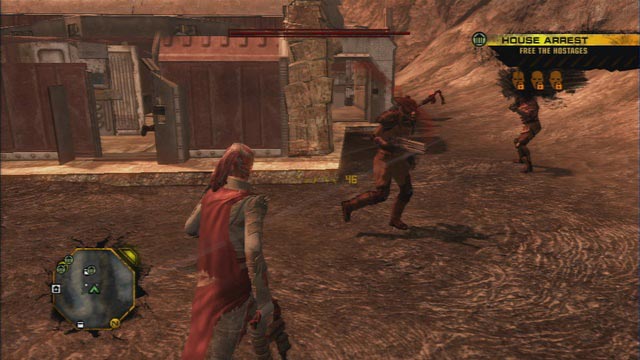 And then there it was, twenty-five days after the game’s initial release, an expansion pack titled Demons of the Badlands was announced and my prayers had been answered. Now, I am not stating that updates, patches, and downloadable content were some new phenomenon introduced to the world of gaming with Red Faction: Guerilla. Patches and downloadable content had been around for years, but something here was different; this was the first time I sensed something different. Simply because the main story of the game had felt so rushed, and the release of the first DLC came so quickly (25 days!), this could only mean one of two things: either the developers were rushed, released as much as they could and then supplemented that with patches called “expansion packs” in the future, or, this was intentional.

You build a game completely, cut it in half, release a portion of it for $50 to $60 and then release small “expansion packs” after the fact and charge the consumer $10 more for each download.  Because rather than release the product in its entirety, a production company could continuously release content to the over-eager fan and consumer (me) stretching the life and cash flow of a product.  At first, I thought of it as a brilliant business move, but now it appears more like standard capitalism. DLC is another inevitable step in a growing industry. My fear is that, if this trend continues, the quality of the artform will be less valuable than the bottom line (to producers and developers). In fact, this may already be happening.

Destiny, for instance, is a hugely popular, sci-fi, first person shooter, and also one of the most obvious examples of this industry strategy to the extreme. You release the game without even hiding the fact that in order to continue to participate in the game and its online community, one is going to have continuously purchase the DLC as they’re released. It’s no secret that Bungie and Activision planned is to provide users with content for ten years — and sort of antithesis to this entire article is that players are demanding more content and not switching to new games.

It’s simple economics. If you’ve got the supply and there is enough of a demand for your product, you can pretty much name your price and it is definitely a big payday for the publishers who won’t sell you the whole cow but can charge you perpetually for the milk. With all that being said, do we, the consumers win?

Is this new model of DLC we’re seeing in today’s gaming landscape a bad thing? Would releasing the game with all of its content on the original release date raise the overall cost, from the average retail price of $59.99 to something more like $99.99? I know that would make it harder for me to keep up my gaming habit I had to explain to the girlfriend why we can’t pay rent this month.Or is it simply that developers are under tremendous strain to meet deadlines and rather than force out a rushed product, they release something polished and build upon that with patches,

Or is it simply that developers are under tremendous pressure from their publishers to meet deadlines and rather than force out a rushed product, they release something polished and build upon that with patches, updates, and expansion packs?

I don’t have the answers, and as a student of history, I hate to generalize an entire industry’s practices into a small consumable notion. Because honestly, I love DLC and look forward to their release — be it Mass Effect, Skyrim, or my old friend, Red Faction: Guerilla. If my ten dollar contribution is going to support game developers to continue to push the boundaries of their field, I’d honestly pay double. The best counter argument I can think of is that if you want more of a game, its dynamic, and its general feel, without having to reinvent it in a sequel, DLC is a convenient vehicle. Like the name expansion pack itself, DLC should expand the experience either with continued story and experiences or simply more content be after the fact additions or ideas that didn’t make the final cut for the initial release, or simply a planned sequel without having to launch another title. It is the continuation of the content and the experience that players want to maintain, but to use that knowledge as a corporate mechanism to milk money out of willing consumers rubs me the wrong way.

I’m not trying to say I believe the normalcy of having downloadable content as part of our gaming experience is the product of a nefarious scheme concocted in a smoke-filled room by a bunch of old white guys. Rather, I view the exploitation of the consumer (gamers) as just capitalism taking its natural course in what is still a relatively young industry. By supporting these firms with our dollars, would that not inspire more artists to produce more content of value? If these production companies did not charge additional fees for each download, would they go under and fail as lots of small development companies do? Or would the developers be rushed to work longer and harder in order to meet an arbitrary deadline and in the end only diminish the quality of their product?

So, again, is it “bad”? I can’t say for sure, but I think it is probably relative and all depends on the developer and producers intentions. I’m not a producer and I can’t read their minds, so I reached out to Activision to try and get perspective on this process and ask if they have a formula or template they follow. As of this date, no one has gotten back to me but I will update if I ever receive word.

I’ve come to the point where I think I’m “trying to have my cake and eat it too” with DLC. So for now, I will accept this as just the way it is and continue to begrudgingly download more content to satisfy my insatiable hunger for an escape.

What do you think of this analysis?  Are DLC’s as they currently stand going to ruin gaming or are they a necessary evil?  How do bundles and subscriptions play into this trend? Or do you have a favorite memory about some of the titles discussed in this article?  Let us know in the comments below!

For more of Eddie’s analysis of the culture, economic, and social aspects of the gaming world, stay tuned to Nerdmuch.com.

Previous articleWhen Video Game Addiction Becomes a Mental Disorder
Next articleNetflix’s Castlevania Producer Wants To Do Metroid Next
Edward Kolnaski
Edward Kolnaski is a History and Social Studies teacher who never really grew up. He loves games of all genres, from current titles like Overwatch, to classic RPGs like Final Fantasy VII. Once the snow starts falling you can catch Ed at one of the local mountains shredding some pow.