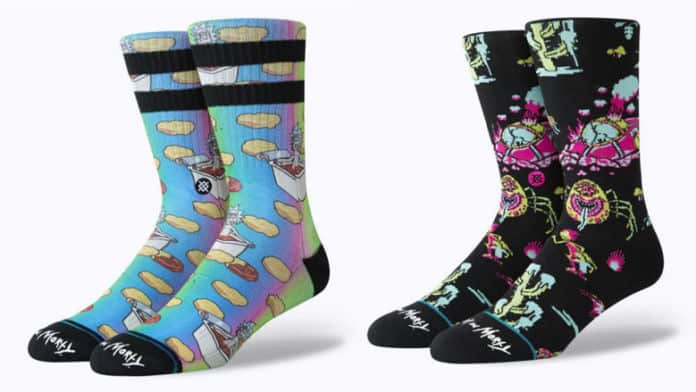 Wubbalubbadubdub! Fans of Rick and Morty and going to love these two different pairs of socks from Stance.

The first pair is called “Dipping Sauce” and for any Rick and Morty fan, the reference is clear from the name alone. But we don’t buy socks by name, do we? Worry not, these high-quality, colorful socks are adorned with a colorful, psychedelic pattern depicting the super-scientist Rick chilling out in a tub of that delicious Szechuan sauce that seems to be his singular pursuit in life. You not only have Rick in the sauce cup but a number of chicken nuggets as well. The sock features black cushioning on the toe and heel, as well as two stylish black stripes near the top of the sock. The Rick and Morty logo is also stitched right into the toe. The “Dipping Sauce” socks retail for $16.

The second pair of socks is titled “Crash Landing” and depict the titular pair of Rick and Morty on one of their messed-up interdimensional adventures. The socks feature both characters fleeing for a portal after their ship crashlands on a strange, alien landscape, depicted by all those weird creature designs the show is famous for. The sock is mostly black, but the stitched artwork really pops in bright, neon colors. Like the “Dipping Sauce” socks, the Rick and Morty logo is also stitched right into the toe. The “Crash Landing” socks retail for $16.

Both sets of socks are high-quality, which is one of the reasons we love Stance socks. They are both medium-thickness crew cut for maximum comfort, and like all Stance socks, they are athletic ribbed and feature a terry loop in the forefoot, heel, and toe. We’re not entirely sure if they mean a “Scary Terry” loop, though. What this means is that these socks are reinforced and extra-cushioned for those parts of the feet that need the most comfort. These socks are also a blend of quality materials including polyester, combed cotton, and nylon.

So if you want to get your Rick and Morty fandom on in comfort and style, you could do far worse than the “Dipping Sauce” and “Crash Landing” socks from Stance.

Previous articleEA and Activision Listed Among Top 100 Overpaid CEOs
Next articleMr. Freeze Q-Fig is Too Adorable