Psyonix has announced their future roadmap for Rocket League as we head toward the spring and summer. There’s a lot on tap from the developers, but one of the more intriguing additions looks to be inspired by a certain very popular battle royale title. 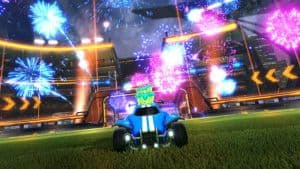 Rocket League will be incorporating something that Psyonix is calling their “Rocket Pass” system. And so that I don’t deliberately compare the mode to its obvious inspiration, I’ll copy the breakdown here in Psyonix’s own words:

“Our ‘Rocket Pass’ system consists of multiple Tiers of earnable content.  You increase your Tier by leveling up normally and you’ll unlock new, unique content as you go.  Each ‘Rocket Pass’ will last for a few months before it’s retired and a new Pass will take its place with new content to unlock.

The ‘Rocket Pass’ has both Free and Premium tracks so everybody has something to work for.  The Free track contains new cosmetic items as well as Decryptors and exclusive in-game Titles, while the Premium track will have a flat cost to unlock. You will be able to preview Premium track content before you buy the unlock to access it.”

This, of course, is exactly how the Fortnite Battle Pass system works within the game’s Battle Royale mode. You pay a flat fee of 900 V-Bucks, and that puts you on the fast track towards earning locked content, some premium and some not.

Just like Rocket League is now doing, players will advance through tiers and unlock cosmetic items and other forms of content as they progress. And just as with Fortnite, each Rocket Pass season will run for a few months before being replaced by the next iteration. It’s a solid system and is earning Epic Games a ton of money, so it’s not a shock that Psyonix would follow the leader as it were.

There’s no set date for the Rocket Pass’ debut. But there is a bunch of other content coming to Rocket League through the spring and summer. In May a brand new arena will be introduced. Competitive Season 8 will begin and players will get their rewards from Season 7.There will be fresh additions to the game’s soundtrack and more.

In June we’re getting a “new, summer-themed in-game event.” No word on what that is though. The RLCS Season 5 World Championships will take place from London. And we’re getting fresh licensed premium DLC. Although what Psyonix licensed we don’t know. Fortnite maybe?

July will see Rocket League celebrate yet another anniversary, and there will be an anniversary in-game event to commemorate. This includes “some special throwback content for our long time fans as well as a lot of cool goodies to earn.”

Through the summer, Psyonix also plans to revamp completely how leveling up and XP is divvied out amongst players. You can comb through all the details on Psyonix’s blog post. During this summer period we will also see the introduction of cross-platform friends and parties.

Psyonix is still doing an incredible job with Rocket League years after its initial debut. And with the introduction of the Rocket Pass system, hopefully it will be easier than ever to trick out your sweet, sweet ride.