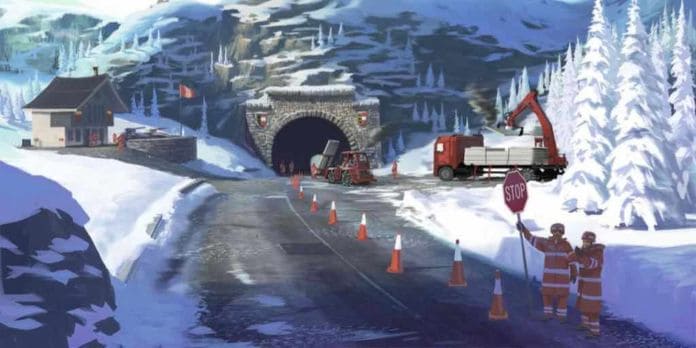 Let me be clear from the start, both sources for these leaks are unconfirmed and even themselves state that they are not sure if the images given are for the correct game. The first set are for Agent, a game Rockstar officially announced back in 2009. The game was supposed to be set during the Cold War and the player was to take on the role of a “counterintelligence” agent. All about that “espionage and political assassinations” according to Rockstar at the time. 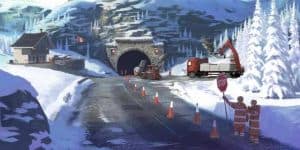 These concept shots for Agent show snowy mountain roads. One is set in the night, in the aftermath of a car crash into what appears to be a welcome sign. The is upside-down in the forefront and a man in a grey suit stands on the road, looking at the wreckage. In the distance is a large building, likely a school, and the surrounding town.

The second is during the day, a much more peaceful scene with the paved road winding it’s way further into distant mountains. Power lines indicate civilization nearby, but no guarantees. There appears to be a snow-covered short cut just off the road, but it turns such a sharp corner you can’t tell where it leads.

The last is again during the day, there is work being done on the road’s tunnel through a part of the mountains. Two construction men stand in the front, one holding a stop sign to indicate that you can’t go further. But just in case, there’s a shelter nearby housing more orange-dressed men. Oddly, it looks more like an embassy of some kind, with military defences and everything. I thought it was some kind of fountain at first, but the shape of the “facets” are suggestive of turrets. Plus there is displayed the cunning use of a flag.

Once again, please keep in mind that these Agent shots were posted on a Bully 2 focused Twitter account. Even then, the account hasn’t been in existence for that long, joining in June of this year and having only 11 tweets since. Even the link to the GTA forum states clearly that the sketch displayed there is from a Rockstar artist, but they are not even sure for which game the sketch is for.

The second set of concept art leaks are for Bully 2, a game that Rockstar has not announced yet. Again, all leaks from the Bully 2 Twitter account. These shots show a variety of characters and schoolground settings, not necessarily consistent with the artwork for the original game but it has been a few years. Long enough for styles to change and graphics to be updated to suit new and better concepts.

Consistency is the only thing holding up these leaks, so there are no guarantees whatsoever that these screens are accurate in any way. Agent hasn’t been heard of since 2009, though 2K did renew their trademark on the name earlier this year. Bully 2 hasn’t even had anything more official than these concept art leaks today.