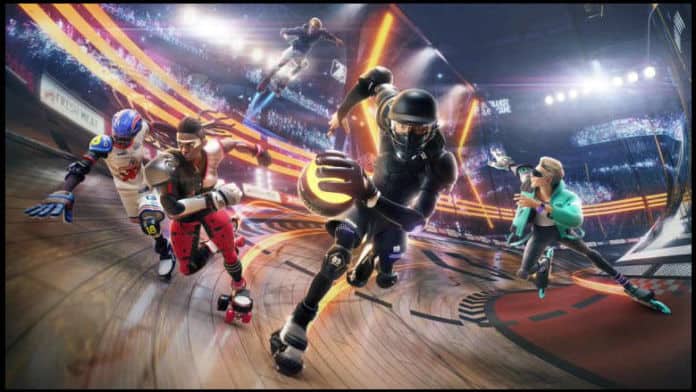 Ubisoft has an E3 press conference planned for us on Monday, June 10th. But one of their show’s reveals may have already leaked out onto the web. A video and art assets for a title known as Roller Champions have emerged. The project appears to be a Roller Derby game that looks and feels similar to something akin to Psyonix’s Rocket League.

The sleuths on ResetEra have details that say Roller Champions will feature Quick Play, Ranked, Custom and Tournament modes for its matches. The title will no have functionality offline. When booted up, the game immediately attempts to connect to servers.

There appears to be a decent amount of customization to your controls and the game’s options menu certainly seems as if it’s attempting to be streamer friendly. For audio, there’s the ability to adjust levels on the crowd, music, voices and sound effects, even going as far as to offer streamer mode specifically.

Within the gameplay menu, the title lists the ability to choose between two different aiming modes in Price and Flick, though we’ll have to wait to see gameplay to know what those mean.  There’s also the option to adjust the sensitivity of your X and Y axis.

The leaked image of the game’s controls give you an idea of what you can expect while on the court. We’ll have to wait until next month where we’ll likely see Roller Champions in action.

The video that emerged didn’t demonstrate any gameplay. Instead, it offered a prerecorded view of several of the arenas within Roller Champions. It footage looked to be taken from an early build of the game as the graphics were clearly not up to par with something that Ubisoft would be nearing for launch.

Rocket League remains one of the more popular eSports games on the market. Ubisoft is no doubt trying to capture what made Psyonix’s game special with their own effort in Roller Champions. Hopefully we’ll see how its looking on June 10th.

Previous articleSea of Solitude Release Date Set for July
Next articleStarbase Trailer Debuts an Exciting New MMO World
Jeff Scott
Growing up a 90's kid, Jeff found his love for gaming during Nintendo's heyday. Because of that, you could (perhaps sadly) call him a "Nintendo Fanboy" to this day.