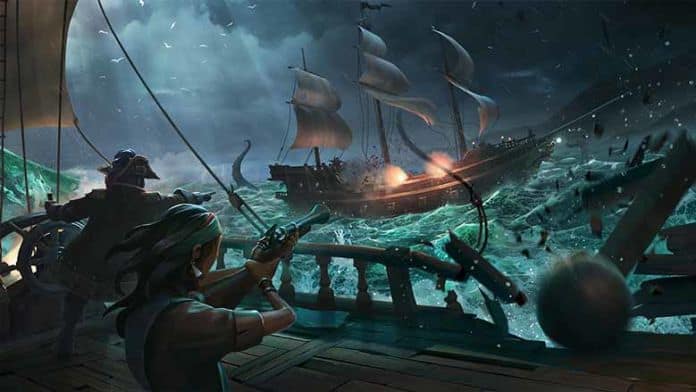 The closed beta for Rare’s open-world action-adventure game Sea of Thieves ended yesterday; now that we’re forced to take a break from marauding shenanigans, I’ll take a moment to detail our initial impressions. If you’re looking for the TL;DR version: we LOVED it. It got off to a rocky start, to the chagrin of many players, but once the initial issues were ironed out it was hard to find fault with the beta. It’s just plain fun. Read on for further details.

If you’re unfamiliar with the game – because, honestly, the development team was a little quiet and this game didn’t get as much attention as it probably should have — you play as a pirate, either by yourself or with a crew of 2 or 4 players. You will get a smaller, faster ship with the 1-2 player options, to balance out the inherent disadvantages of having a smaller crew. You are given a shiny new ship and you may purchase voyages from various companies (there was one represented in the beta, but there will be more on release). As you complete these voyages, you will earn reputation with the relevant faction – thereby unlocking higher-level voyages – and coin to spend on in-game items.

We were able to login and play around for a while after downloading the beta, but by that night, the servers were apparently overwhelmed and it seemed many players (including ourselves) were unable to login. However, the developer quickly addressed this issue the next day and even extended the beta by a couple days to make up for the lost play time. 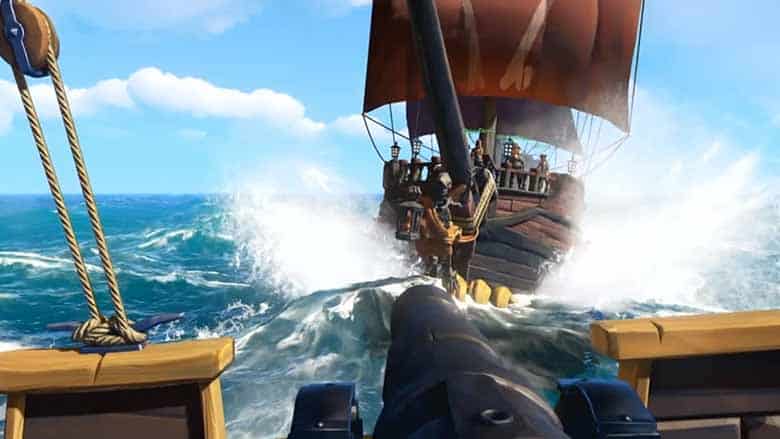 Once we were able to login, it was smooth sailing (pun absolutely intended). There were no obvious graphical hiccups, framerate drops, or bugs whatsoever. The only real issue we noticed on the technical side of things was the camera; it was a bit awkward at times, mostly due to the sensitivity being way too high even after it was adjusted to the lowest setting. Also, it would certainly have benefited from an option to switch into third-person POV, as first-person was a bit uncomfortable at times. That would also likely help with the motion sickness that some players have complained of.

The developers absolutely nailed the atmosphere, and that’s why the Sea of Thieves gameplay we’ve engaged in so far is that much better. Not only is the game visually appealing, but the whimsical graphics fit perfectly with the game’s jovial nature. The soundtrack is perfectly suited to swashbuckling adventures, complete with NPCs humming well-known pirate ditties. You can even drink grog with your crew and play a shanty on your accordion; team members who plays their instrument nearby will automatically join in with you.

There is a day-night cycle as well as various types of weather to change up the scenery a bit. Otherwise, it’s mostly just small tropical islands, but there’s enough of points of interest on each that it never feels redundant. 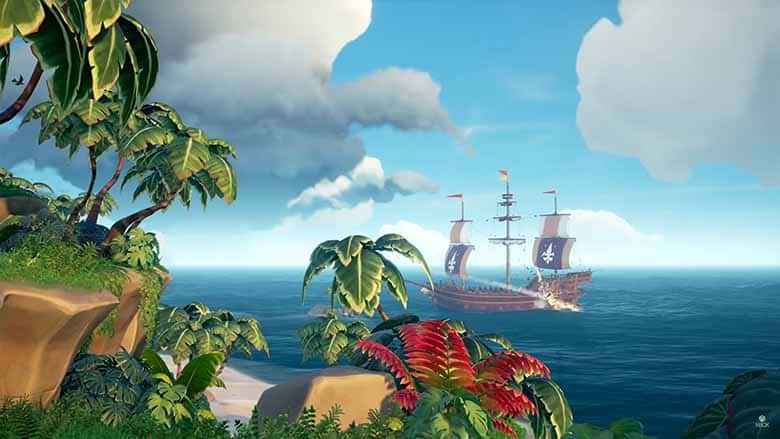 Right now, the feature most noticeably lacking from the game is any sort of customization, but we’re hopeful that this will be added at launch. This beta was seemingly intended more to give players a feel for the mechanics of the game; the developers have stated that they are holding back many features for the game’s full launch.

The game drops you on a small island outpost with zero guidance, which in some games might be frustrating but in this case, half the fun was in figuring out how to do things and what exactly there IS to do. I know we’re not the only ones who experienced a thrill when we discovered that we could, in fact, launch each other out of the ship’s cannons. We derived a fair amount of enjoyment just from discovering exactly to utilize the various tools at our disposal.

The missions start out pretty basic, allowing you to really get a feel for the core mechanics, such as combat and sailing your ship. You’re given either a visual map of an island with a big red X indicating the treasure’s location, or directions in the form of a riddle. You must then find the corresponding island on the world map and navigate your ship there. Sailing your ship feels satisfyingly realistic (at least, based on what we imagine sailing a pirate ship would feel like). You can almost feel the physical weight of the anchor as you raise and lower it; the sail must be adjusted based on the direction of the wind to achieve maximum velocity; and the steering is far from precise, especially when being tossed about on stormy waters.

You have the option to play by yourself and captain a smaller vessel, but multiplayer is where the game really comes into its own. There are many potential roles on the ship to assign different crewmembers to, and the teamwork element is incredibly satisfying. For example, one can look at the map and give directions to whoever is at the helm; someone will need to operate the cannons in the event you come across an enemy ship; and someone can act as lookout from the crow’s nest. Also, if you do run into enemies (or rocks), someone will need to run down to patch holes in the ship and bail out the water before you sink. If your crewmates are all busy, however, you can certainly have fun exploring the world on your own. 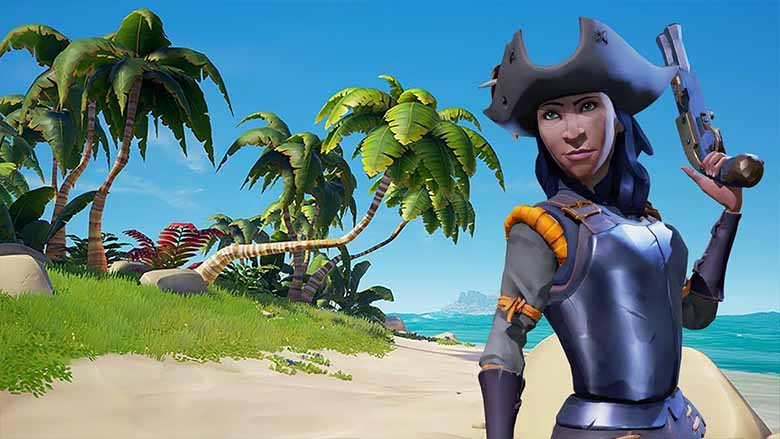 We didn’t actually run into a ton of other players on the high seas, but when we did, PvP combat was incredibly fun. The pirate guns and cannons are as imprecise as one would expect, but rather than being frustrating, this makes it all the more satisfying when your shot finally connected. The severely limited amount of ammo also makes your sword a valuable resource.

There are other dangers that await you besides enemy players, too, such as skeletons guarding treasure and sharks lurking beneath the waves.

The beta may have been a little bare-bones, but — at the risk of overusing this word — it was still undeniably fun, and certainly succeeded in showcasing the game’s immense potential. If the devs and certain data mines are to be believed, there is a LOT more content coming with the game’s full release. Rare also promises that Sea of Thieves will be “an ever-evolving game” that will be “continuously updated after launch with new features, adventures and ways to play.” As is, it gets a little monotonous after a while, but we are super excited to see what Rare has in store for the game’s future.

Did you get to play in the Sea of Thieves beta? What did you think? Sound off below in the comments!