Seriously Casual: What Pac-Man Means to Me 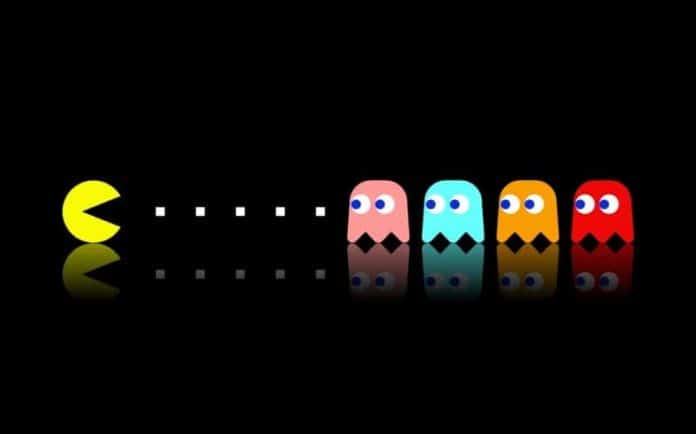 After finally getting my hands on a NES Classic Edition (an item I desired and discussed at length), I dove in. The NES Classic Edition was everything I hoped it would be: quick and easy access to the past. I started with Kirby, one of my favorite IPs: the perfect combination of cute and creative. While I was eager to start Metroid and The Legend of Zelda I didn’t want too many files going at once, especially considering I’m already juggling several games (Life is Strange, Pokemon Moon, Donkey Kong Country, and Super Mario 64 to name a few). As far as the NES Classic Edition, I decided it’s all Kirby until further notice. But that didn’t stop me from loading up Pac-Man. 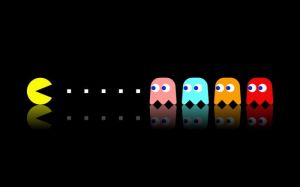 I figured it “doesn’t really count” since the campaign only lasts as long as you do. Pac-Man seemed like a harmless pursuit, a little “arcade at home” experience. I was mistaken. What ensued was the start of a quickly growing Pac-Man obsession that I fear may consume me. RIP to my wrists and sanity. I feel like my gamer history is being rewritten with Pac-Man becoming one of my favorite game of all time. And the more I think about it, the more it makes sense. Here’s what I love about Pac-Man.

The satisfaction of clearing the maze

An empty kitchen sink, a clean bedroom floor, all the laundry put away: there’s comfort in completing a tangible task. As messy as my apartment can get, I don’t enjoy mess. Still, I let the clutter pile on until I decide I’ve had enough. When I clean, it’s transformative. It’s refreshing. To me, a freshly cleaned apartment makes me feel like I can take on anything: even if that just means enjoying an organized space. I get that same feeling with Pac-Man. All lore aside, some may look at his pursuit of pellets and see Sisyphus. Which is to say, with each cleared stage of Pac-Man comes another stage to clear—so what’s the point? But I find comfort and beauty in this ritual. If cleanliness is godliness, I have played Pac-Man and gazed upon the divine. 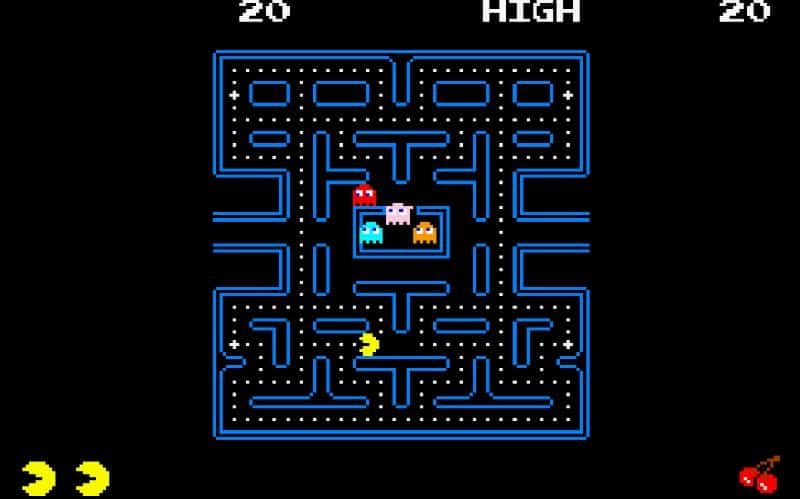 It’s a feeling I will, quite literally, chase again and again until I top my most recent high score. Because unlike poor Sisyphus, who moved a boulder to the top of the hill every day just to have it roll back down, there’s enough variation in Pac-Man to make it a satisfying chore. How will you move? How will the ghosts move? Will you reach the fruit in time? And, of course, how long before the inevitable game over? I never quite know the answer to any of these questions, but I’m determined to find out with each play through.

The completionist joy of getting the fruit

At first glance, Pac-Man doesn’t seem to offer much. Clear the stage and move on to the next one. But trying to nab the ghosts before they go back on the offensive and trying to eat the fruit before it disappears is an additional level of complexity. Despite being an extremely simple game, Pac-Man brings out the completionist in me. The more ghosts and fruit I eat, the higher my score. It’s not enough for me to clear the stage; I want to nerf every enemy in sight. And most of all I want to get that fruit. Managing to eat a strawberry without getting wrecked by a ghost is my favorite virtual heist. It feels like I got away with something, like I pulled one over the bad guys. Time to waka waka away into the sunset.

As a Pac-Man noob, death and I are well acquainted. I know all its forms: when you’re caught in a corner between two ghosts, when a ghost goes back on the offensive at the worst possible moment, when you get greedy and it costs you, and (my personal favorite) when you lose control of the D-pad. When it comes to a Pac-Man rage quit, my swears are short, precise, and loud. It’s an immediate moment of white hot hatred followed by a complete disregard for what just happened. I have to try again.

In some ways, my Pac-Man pursuits are pure narcissism. No one in my apartment has even picked up the controller. The high score I’m chasing is mine and mine alone. And while I’m looking forward to everyone else giving it a try, right now I’m content to have this for myself. With other games, even when I’m the only one playing, it’s about getting to the end. It’s about beating this game so I can discuss it with others or use the game as a springboard to other games of its kind. Granted, here I am writing about Pac-Man (making this solitary experience a public one)… but it didn’t start that way and, for me, that’s novel. Pac-Man was a game I picked up “just for fun.” So the other day I put on a podcast and played for an hour, climbing higher on my own leaderboard. And that act was peaceful enough to dissipate any gamer rage that comes from ghosts.

The desire to get good

Pac-Man has four ghosts, aka your enemies, Blinky, Pinky, Inky, and Clyde. They all have their own behavior and patterns; understanding that is, apparently, one of the keys to mastery. I don’t know what all of this entails or how to avoid my deaths yet, but I’m determined to learn about my enemies and conquer this maze universe. 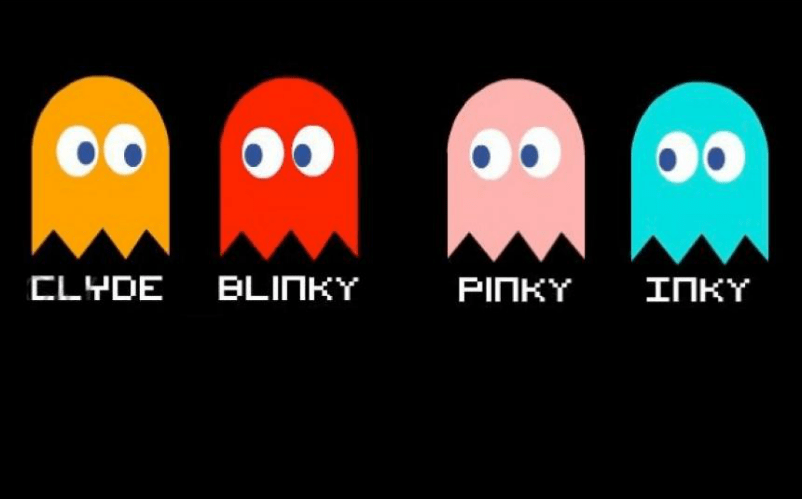 Why? Because it’s nice to be damn good at something. I don’t have any goals to be listed as a Pac-Man legend but I really want to get better and the strategies behind this little circle fascinate me.

One of my most vivid childhood memories was when my family went to see Star Wars Episode II: Attack of the Clones for my brother’s 8th grade graduation and we had some time to kill before the show. My dad, who is not a gamer, decided to play some Pac-Man on one of the few arcade machines the AMC theater had around. I was watching him play a pretty intense round. And as he stared at the screen with a military like focus, rapidly moving through this maze, his hand slipped right off the joystick and he hit me in the face. It probably hurt, though I honestly can’t remember, but it was worth it to see my dad get completely immersed in a game to the point of complete disregard for the world around him. 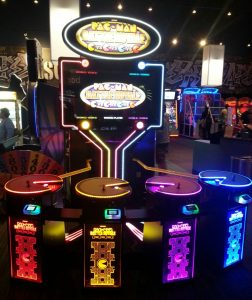 Flash forward to 2016, my brother, his girlfriend, and I met my (previously) estranged aunt for the first time. We decided to meet at Dave and Busters to break the ice, which I thought was a little strange but the whole circumstance was bizarre to begin with. So what’s a game that’s an easy, fun, multiplayer? 4-player Pac-Man of course. We played other games as well and eventually sat down to discuss family history and who we’ve all become during all these years. But I find it amusing that Pac-Man was one of the flagship games for that day. Everyone knew how to play and everyone won a match. It was a nice moment of camaraderie, something familiar as all of navigated this unfamiliar terrain.

And the stories still coming up…

Today, I reached the end of a job interview and we wrapped it up with small talk. The CEO of this education non-profit (i.e the man interviewing me) had mentioned he played video games as a kid. When I inquired further he named a lot of games but the one he talked about the most was Pac-Man: “My dad would take me and my siblings to the arcade. He was a Pac-Man master. I mean, he’d go for 2 or 3 hours on a single play through. He’d give us $20 and we’d run out of money while he was on still on his first quarter.” I love how many quirky Pac-Man stories must exist out there and how easily they come up.

There are people who dedicated their life to being among the best Pac-Man players in the world. There are people who are just damn good. There are people who only play with a beer in hand at the arcade (previously me). There are people who enjoy the home console or mobile iterations of the game. And there are people who would never call themselves gamers but still cite their appreciation for this particular game. As for myself, I’m just looking to have some fun (and inevitable frustration) at home. I’m seriously casual about the game which is to say it’s a growing obsession I will make myself step back from frequently. I don’t want my whole gaming life to be chasing dots. At the same time, as trivial as the game may seem it holds a lot of weight. This game has meant, and will continue to mean, a lot to a lot of people. And it’s just approachable enough to consume you completely. For me, Pac-Man will always be seriously casual.

Previous articleRosewill RK-9000V2 RGB Mechanical Gaming Keyboard Review
Next articleBest Music Moments in Movies and TV: 2016
Janet Garciahttps://www.youtube.com/channel/UCnfZ6eVYE4X2dzDixD5cNrw/featured
Janet Garcia is an editorial writer with bylines at IGN, Kotaku, and more. Her favorite genres are platformers, puzzle games, and simulators but in reality she spends most of her time playing FIFA tournaments in her apartment.