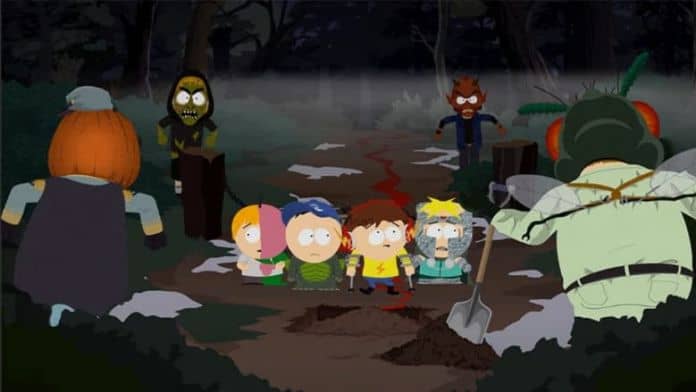 Ubisoft has finally shed some real details on the upcoming South Park The Fractured But Whole Bring the Crunch DLC that’s headed our way. And it sounds as though the upcoming content is going to be a pretty meaty addition to the overall package.

An entirely new story campaign was designed for the South Park The Fractured But Whole Bring the Crunch DLC too. The adventure revolves around the introduction of Mint-Berry Crunch, aka Bradley Biggle, aka Gok-zarah. Mint-Berry Crunch has arrived from his home planet of Kokujon sporting his superhero ability to wield the power of mint and berries – whatever the hell that means.

Coinciding with the arrival of Mint-Berry Crunch are the nefarious events taking place at Lake Tardicaca. Ubisoft details the overall story by saying “an idyllic summer at Lake Tardicaca turns into a nightmare when the camp counselors go missing. With the fate of summer camp in jeopardy, FastPass sends out a Coonstagram distress signal. Team up with FastPass, Doctor Timothy, Professor Chaos and the newest member of the Coon & Friends, Mint-Berry Crunch, to save summer camp.”

The South Park The Fractured But Whole Bring the Crunch DLC will introduce an entirely new class too which Ubisoft San Francisco is dubbing “Final Girl”. Details are slim with the developers just describing the class having the ability to “overcome insurmountable odds to survive.” They also say that the Final Girl class will introduce new combat tactics and traps. Once players complete the story campaign within Lake Tardicaca, you’ll then be able to utilize the new class within the main game.

Ubisoft is retailing the South Park The Fractured But Whole Bring the Crunch DLC at $11.99. The minty-fresh content will rollout simultaneously on the PC, PlayStation 4, Xbox One and Nintendo Switch on July 31st.