Spider-Man: Into the Spider-Verse Review

There has been an exhausting amount of Spider-Man movies.

Despite this superhero’s overwhelming popularity, there have only been a handful of genuinely good Spider-Man flicks. What’s even more surprising is the lack of any major animated features revolving around everyone’s favorite web shooter. Enter Spider-Man: Into the Spider-Verse, a stunning animated film that’s perhaps one of the best superhero movies in years.

The story this time revolves around Miles Morales (Shameik Moore), a Brooklyn kid who ends up getting bit by a mutated spider. While this sounds like your typical set up for a Spider-Man film, Into the Spider-Verse diverges quickly when the villain Kingpin (Liev Schreiber) rips a hole in reality. This causes several different Spider-People – including the Peter Parker we know – to come stumbling into Miles’ universe.

What follows is around 2 hours of Miles and the various Spider-People trying to figure out how to stop Kingpin and get back to their reality. It’s a fun concept and seeing the different (and very real) versions of Spider-Man interact is entertaining. The whole thing is pretty silly at times, with Into the Spider-Verse leaning in on some of the more ridiculous variations of this hero. Yet, the crux of the film is shockingly emotional for a movie that features Spider-Ham.

Miles’ relationship with Peter Parker (Jake Johnson) is genuinely compelling. A lot of this is thanks to Johnson’s portrayal of a far more cynical and aloof Spider-Man. Peter is past his prime and is simply going through the motions of being a hero. This not only makes his mentorship of Miles more engaging, but it sets up some pretty powerful scenes that help them both grow as characters. Even though we know how this will end for both of them, their journey is captivating enough to make up for the obvious finale.

A lot of this is thanks to the wonderful performances from both Johnson and Moore. Both of these actors have terrific chemistry and it’s clear they are having fun with the project. Moore taps into the right amount of confidence and emotional immaturity that Miles needs. He’s different than Peter and Moore does a great job at making Miles feel like more than just another Spider-Man.

His relationship with both his father and uncle is also rock solid. Parents in superhero films are typically pretty thankless roles, but directors Bob Persichetti and Peter Ramsey do a fantastic job as fleshing these figures out. Both have different ways of interacting with Miles, but it never truly devolves into good or evil. Even when the big twist is revealed, Spider-Man: Into the Spider-Verse stays focused and lets the audience decide the morality of a character’s actions.

Sadly, Into the Spider-Verse isn’t a perfect film, as the villains act more as an obstacle than living, breathing characters. Even though there’s an admirable attempt at humanizing Kingpin’s actions, it comes off as forced and hollow when compared to the rest of the characters. Having a stable of villains to fight wouldn’t normally be an issue, except the rest of the movie does such a great job fleshing out its characters that the bad guys feel hollow. It’s a shame too because they have wonderful designs and their fight scenes are pretty inventive. The one exception is Hammerhead who is still one of the least interesting villains in Spider-Man’s rogues gallery. 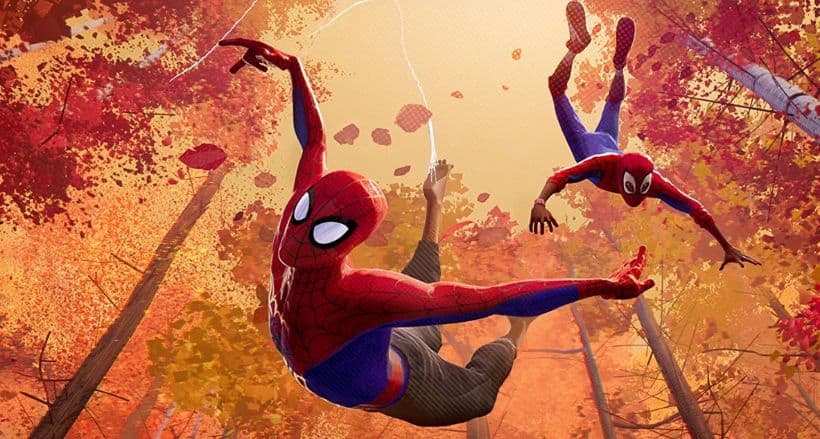 Of course I would be remiss not to discuss the jay dropping visuals and animation used in Spider-Man: Into the Spider-Verse. Like a comic book come to life, Into the Spider-Verse pops with color and visual flourishes. From the text boxes showing Miles’ inner thoughts to the Spider-Sense indicators appearing over character’s heads, it’s clear this film was made for comic book lovers. Backing this up is a terrific soundtrack and solid editing that always keeps the film from feeling sluggish.

The only time the film’s unique visual aesthetic gets in the way is the climax. It’s not bad, the but barrage of colors and use of CGI can make some of the action pretty hard to follow. That being said, this is a very minor issue when the rest of the movie’s fight scenes are extremely enjoyable. There’s a particularly great battle in a forest with a famous Spider-Man rogue that is a standout moment.

Previous articleChildren of Morta Release Date Moves to 2019
Next articleMortal Kombat Trilogy Remaster Rumored
Collin MacGregor
Collin is a complete film geek and the one person who actually likes playing the medic class. When he's not raiding in Destiny, making poor choices in Dark Souls, or watching Mad Max: Fury Road for the 100th time, you can find him writing for Nerd Much and Heavy.