“Hi everyone, thank you for coming to Chi-Shoals; you all came here to get better at a game made for children.”

This was how the second event of SquidWest’s Chi-shoals began. SquidWest is a “hub for Midwest Splatoon Players — organizing and distributing information about regional Splatoon LAN events.”

The event I’m discussing is one of their Chicago lans, aptly named Chi-shoals. Chi-shoals is an event “meant to foster less-than-perfect-but-earnest players into more tournament capable players” but it’s also open to more skilled players who are “so good at video gaming that [they] want to meet/make other players good at video gaming just to have SOME competition” (via event Facebook page).

You would think a group of people dedicated enough to take up to five hours out of their Sunday evening and bring their switch (dock and all) over to the Southside of Chicago to hone their Splatoon 2 skills would take offense to a comment like that; but no one did. I think that goes beyond acknowledging the haters. The truth is, Splatoon 2 is a goofy game. Even if you’re striving for eSports heights, a part of you can’t take it seriously. And that’s one of the most charming things about Splatoon.

Here are all the ways this game is a derpy wonder the community helps foster:

Splatoon 2 is more or less the same as its predecessor, fortunately with just enough additions to warrant a new game (especially considering the change in platform). But let’s put those changes aside for a moment and examine the culture of Splatoon 2. While Splatoon, itself, has existed for some time, it’s worth reexamining now that the *cult following has—not only carried over—but grown in numbers.

(*It’s also worth noting that Splatoon has sales numbers way higher than this phrasing suggests, especially in Japan).

While it could lead to dated content, this game’s willingness to embrace modern (internet) culture is part of what makes it amusing. From poking fun at Instagram and social media culture: 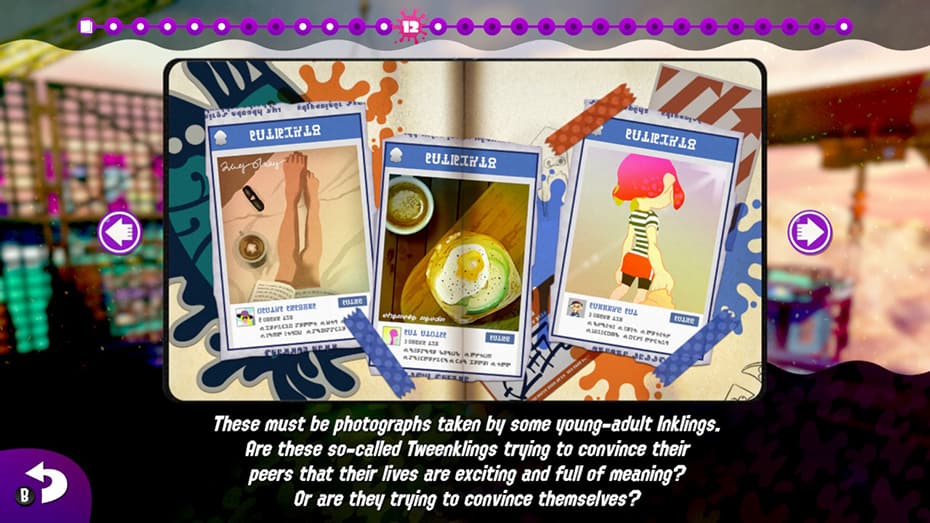 to having players walk around Inkopolis which always leads to odd, at times impressive, sketches other players have made. The whole thing is a recipe for sh*tposting, memes, and general tomfoolery. 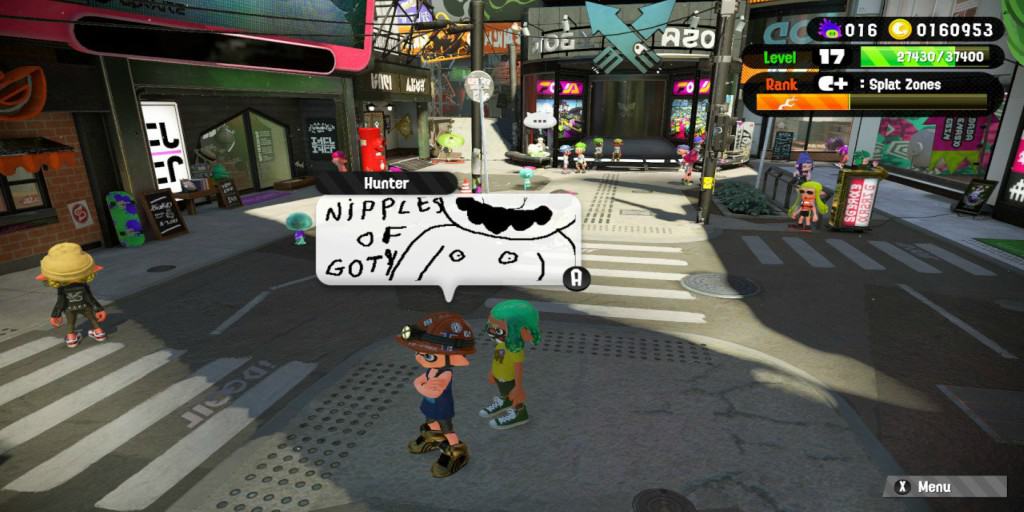 The story and pre-online match cutscenes are full of puns and innuendos. Really, the whole game itself is a little dirty. Humpback Pump Track any one? 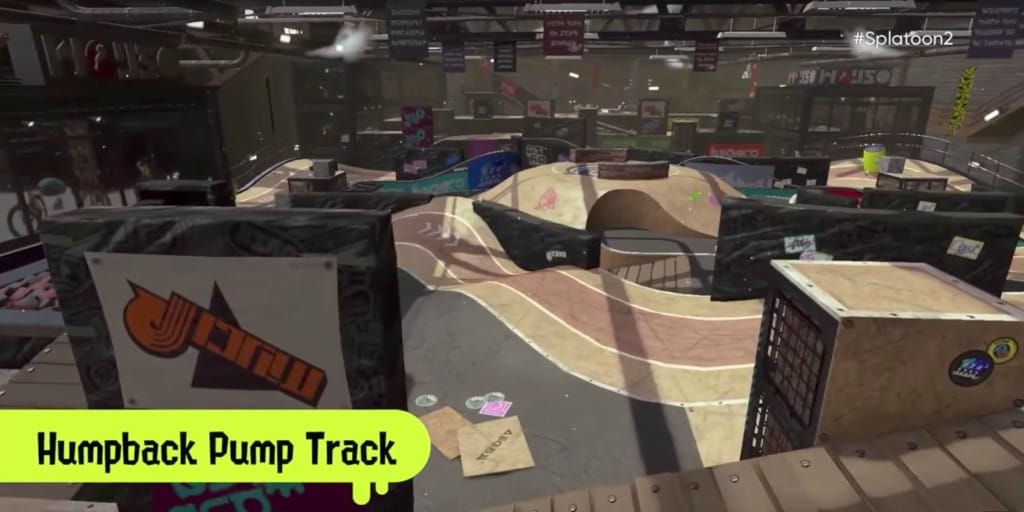 The premise is bizarre as the bulk of Splatoon is centered on pop stars of the sea. With a cat that appears to judge battles. Why a cat? Why not! 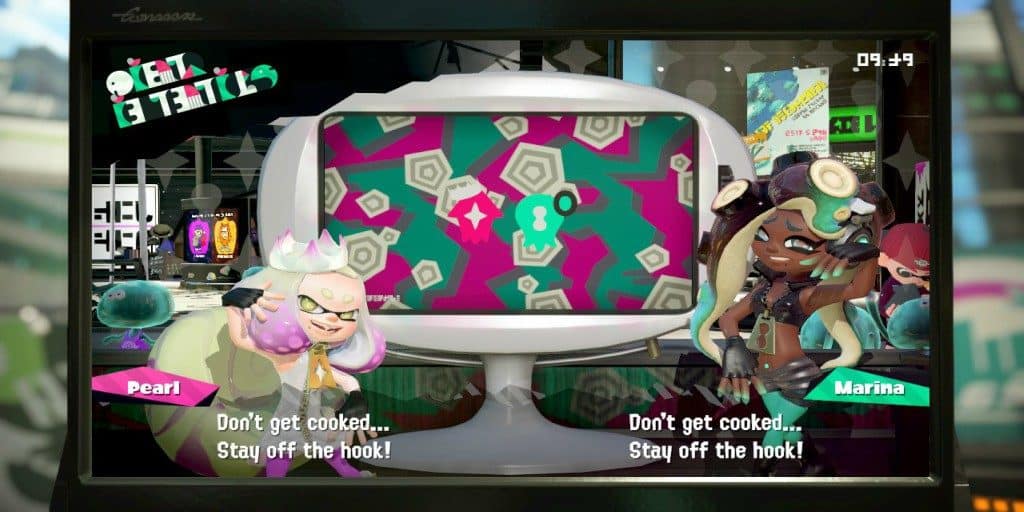 Between “killing” opponents with ketchup and mayo colored ink and Marina discussing the perks of invisibility (no one can see you inking your splatzone), the whole things starts to get difficult to explain to outsiders.

But you try anyway because here’s the thing, this game is brilliant.

What is Splatfest if not one of the more doofy, but light hearted, corners of the internet? Arguing over the mundane and standing by it like it’s a part of who you are. Pair that with the camaraderie of sports (i.e team allegiance for the sake of allegiance) and it’s a potent combination. That being said, we know it’s all in good fun. 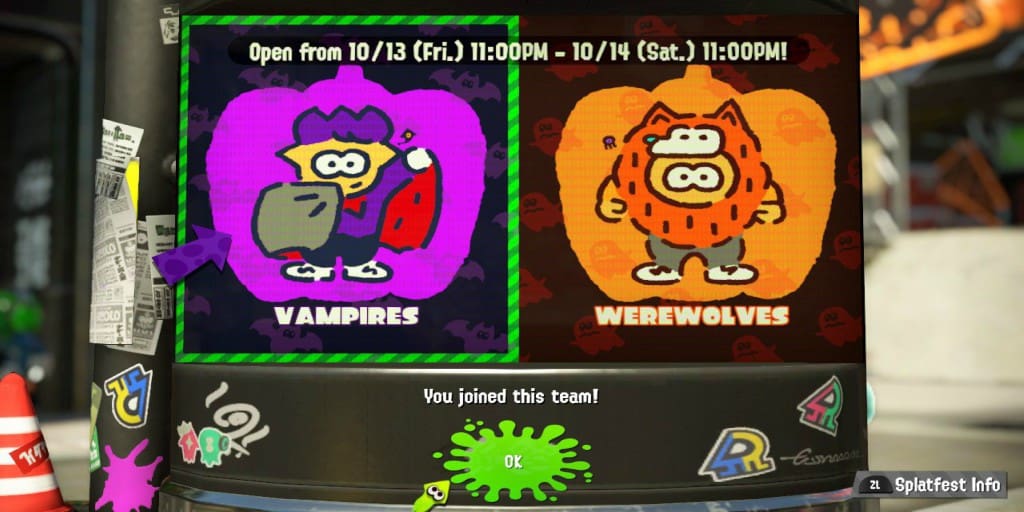 Ketchup over mayo, flight over invisibility, vampires over werewolves. I came for the culture but I stay for the bragging rights.

Staying Fresh and Shopping a Lot

Then there are all the quirky extras Inkopolis has to offer. I spend a good amount of my time in Splatoon 2 testing out different clothing and weapon combinations. It’s a constant struggle between good stats and looking fly. Sure I have more powerful headgear, but this mask reminds me of those bape masks. Are there better shoes? Yes. But how could I pass up these bootleg yeezys? 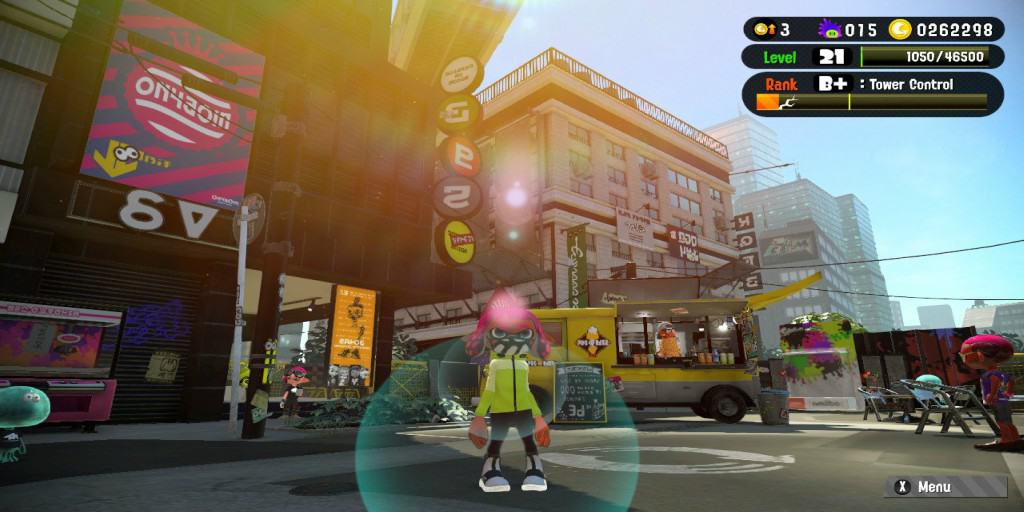 When I’m not obsessing over my own wardrobe I’m literally ordering stuff from other people or buying things on SplatNet (using Nintendo’s online gaming app).

And I haven’t even begun to get into level boosts, etc. by ordering food from Crusty Sean.

Splatoon 2 is a shooter developed by Nintendo — two things that are, seemingly, at odds. Nintendo doesn’t usually do shooters, violence, or anything that might get rated M+. (Hell, Super Mario Odyssey‘s E10+ rating is the highest ESRB rating any Mario game has ever received).

The fact that people were intrigued by that is a testament to just how vanilla Nintendo is. So, how does Nintendo approach a shooter? In true Nintendo fashion, which is to say it’s unsurprisingly kid friendly.

But Nintendo is known for more than wholesome fun. Nintendo means great mascot characters and revitalized takes on popular genres. The Splatoon franchise fires on all these cylinders. Nintendo could never go up against Call of Duty, Rainbow Six Siege, or even Overwatch (all of which have (at least some) shooting components. Instead of a bloodbath, Splatoon is a paintball fight to the extreme.

Splatoon may be user-friendly but its strategy and required skills are far from juvenile. Yet, I’d never call Splatoon 2 a mature game — it’s got freaking hamster balls and weaponized umbrellas. 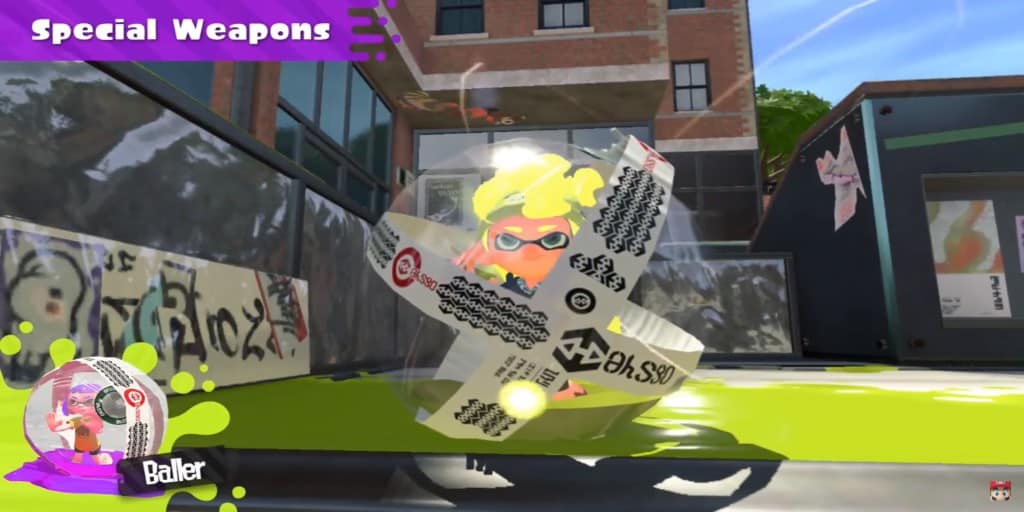 One weapon is a bucket that’s described as just a bucket. There’s a lot going on in Splatoon 2 and it’s easy to get lost in the action if you’re not used to having hardcore sessions in these brightly colored paint battles to the death.

Between raining ink and cute but deadly autobombs, Splatoon 2 is a lot to explain and you’re guaranteed to sound like a dork when you try. I mean, the aerospray’s special is a Canadian Sport; what’s that about? But wow, it sure does a lot of damage. 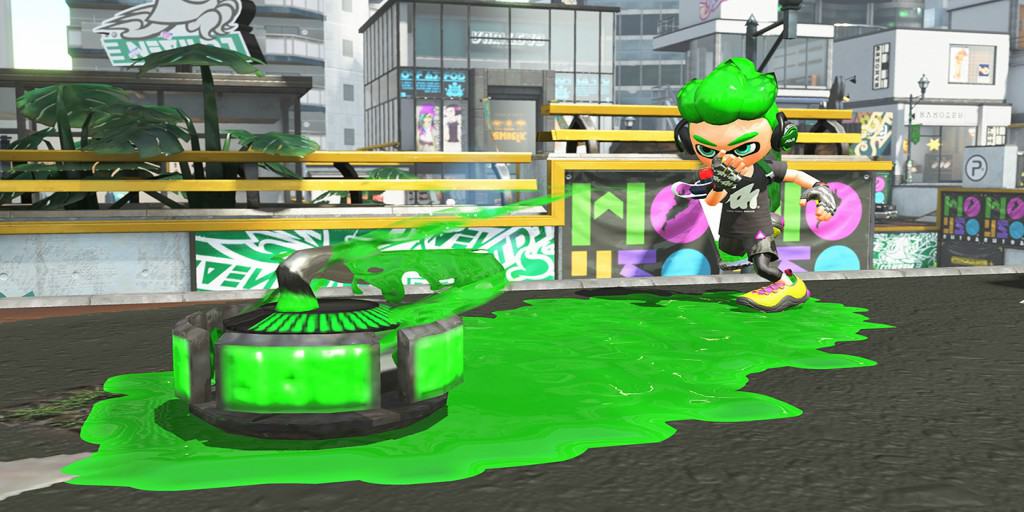 While training has an element of higher level conversation (discussing motion control sensitivity, how to best use your special, tips on flanking, stealth, and general strategy) it’s still a bit silly. Whether you’re “maining” an Octobrush or a freaking NES gun, this is weird as hell.

Those working their way up the ranks and trying to get into the competitive scene are impressive skilled players. Like any other eSport, getting good at Splatoon 2 means understanding the game on a deeper level and moving at a higher caliber than casual players.

So there I sat, in a room full of monitors being coached and encouraged by those passing my screen. As seriously as I take my matches, Splatoon 2 remains a silly shooter. I love that and the light hearted community I’ve found to go with it. I even had a few good ranked matches with some impressive kill stats while at Chi-Shoals.

“Do you want to screenshot that?” a fellow player asked me. 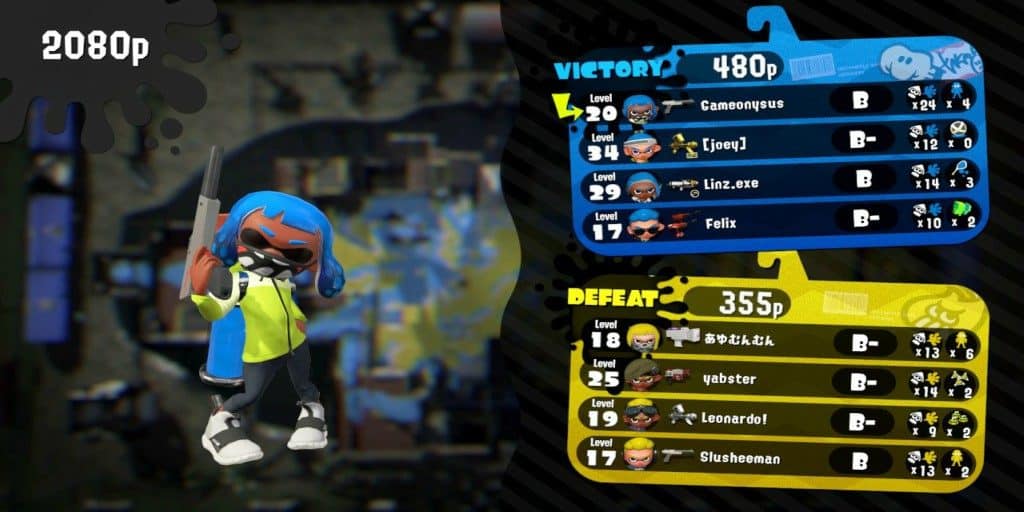 “Yes,” I replied, slightly embarrassed by my own vanity but also proud of my stats.

I am slowly climbing up the ranks but I’m the same squidkid I always was: which is to say I’ll always booyah back to this quirky, lovely community that rallies around this derpy yet refined shooter.