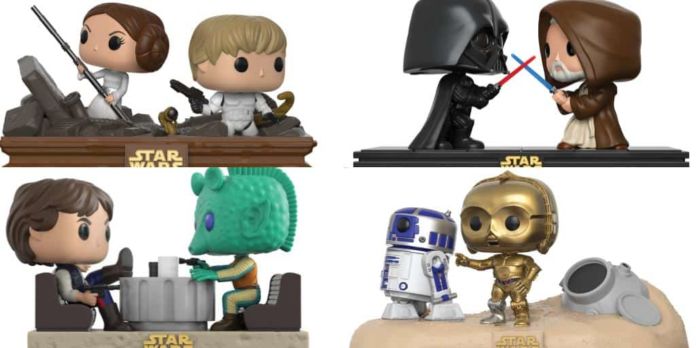 With Star Wars: The Last Jedi coming closer and closer to release, the hype is on. Walmart has introduced a brand new wave of exclusive Star Wars Funko Pop! Movie Moments figures that commemorate some of the best Star Wars scenes to date. Each set shows off all the best moments from the original trilogy including, Cantina Face-off, Death Star Duel, Escape Pod Landing in Tatooine, and Trash Compactor Escape. 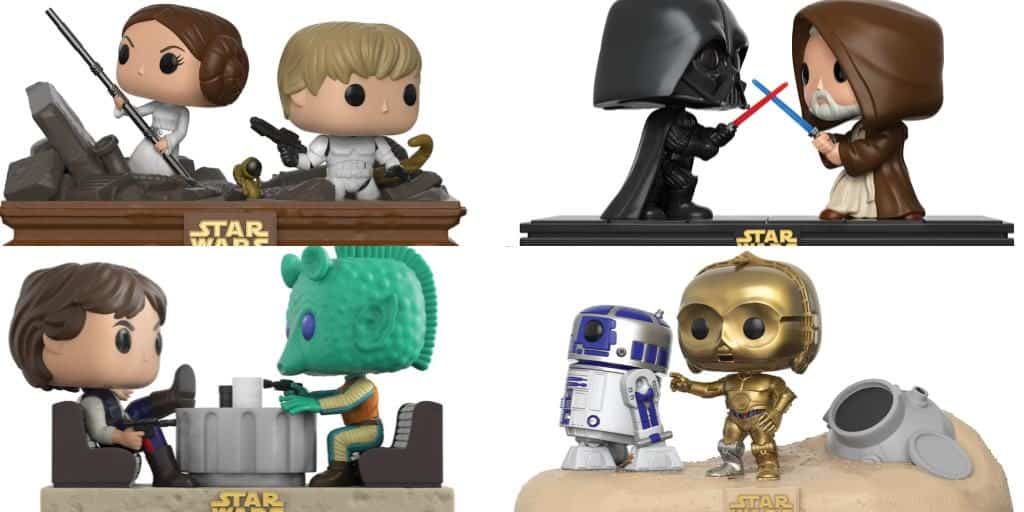 The Cantina Face-off refers to what is probably one of Han Solo’s most iconic scenes. Greedo has come to the cantina to make Han Solo pay up for his debt to Jabba the Hutt or escort Han Solo to Jabba the Hutt (possibly kill) and receive that bounty on his head.

But before we find out exactly what Greedo is going to do with Han Solo, the pilot fires his blaster. Greedo falls dead, Han Solo casually apologies to the bartender for the mess with some coin, and leaves like he did nothing more than spill his beer on the table.

The Funko Pop! figure captures the moment just before Han Solo fires his gun. His leg is still up on the table to show how laid back and uncaring he is about the situation. All the while hiding the gun he is sliding out of it’s holster. Greedo, of course, none the wiser.

The Death Star Duel is one of the greatest Jedi fights in the original trilogy. We get to see teacher and student meet again after the rather enormous falling out they had. Friends become foes, despite Obi-Wan Kenobi’s best efforts to help Darth Vader see the error in his ways. The Funko Pop! figure of this scene shows a stand off, no fancy flips or moves frozen in time here.

Escape Pod Landing in Tatooine is one of my favorite scenes, if only because C-3PO and R2-D2 bickering is so funny. It’s a scene I remember best from my childhood, and cemented my high appreciation of C3-PO. In the figure we see the escape pod and C3-PO gesturing to R2-D2.

Last but not least is the Trash Compactor Escape where Luke Skywalker and Princess Leia have finally made it onto the Death Star, but must fight off dianoga first. The Funko Pop! version has Leia posed for a fight with her staff and Luke with his gun looking a little stunned.

These will be available at Walmart.com and in-store in early November.