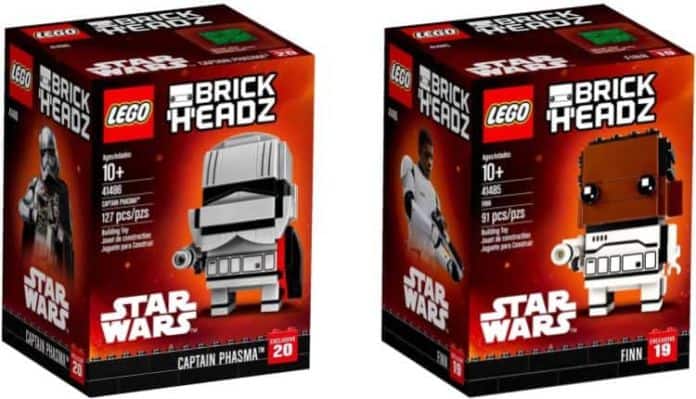 If you happen to be looking for a classy stocking stuffer, look no further than Star Wars LEGO BrickHeadz Captain Phasma and Finn figures. Both are buildable, with Finn at 91 and Captain Phasma at 127 pieces and a display stand for when the lucky receiver of this gift is done building. 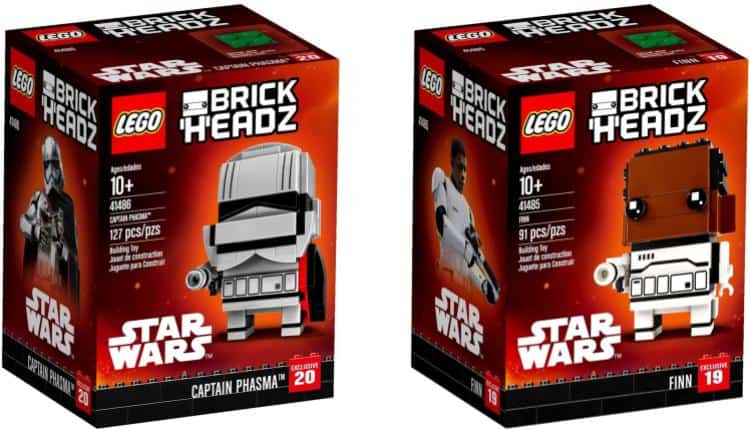 The Finn figure in particular has a detachable blaster in case you want Finn to lay down his weapon for the moment. Or perhaps for a game of mini-blaster, depending on your imagination style.

Finn measures at 4.8 inches tall and about 3 and half inches wide. He makes a better rectangle than a square. The recommended age is 10 years and up, due to the many parts of such a LEGO series. Finn is also quite reasonably priced, only $15.07 USD. Given that most movie-themed LEGO compilations are sometimes three times the cost of similar items that are unrelated to movies.

Captain Phasma also has a detachable blaster, though it may be a little cathartic for some to just take her blaster away indefinitely. She’s a littler taller than Finn at 5 inches and 3.6 inches wide.

Where Finn is just in the standard Stormtrooper armor, Phasma stands proud in her chrome armor, helmet, and buildable black cape. She is nothing without her cape, which certainly would never be a hazard in battle and further distinguishes her from all the other plain Stormtroopers that she commands.

Though some might argue that these Star Wars LEGO BrickHeadz Captain Phasma and Finn figures are a little large to be considered stocking stuffers, I say that stockings are meant to be stuffed full.

These figures are not terribly expensive and would prove a fine addition to any nerdy office or shelf space. Besides, if you get a bit bored at work, you can “accidentally” knock this figure down and spend the next five minutes rebuilding it.

Previous articleGame of Thrones Paper Art Collection By Lovepop
Next articleStar Wars: Episode IX Will Be Rey’s Last
Rhys Pugatschew
Rhys found his love of gaming in Zelda and expanded to almost all genres. He will be bringing you the latest news in the industry. He has worked for ZeldaInformer and CheatCC, happily writing his opinions for all see!