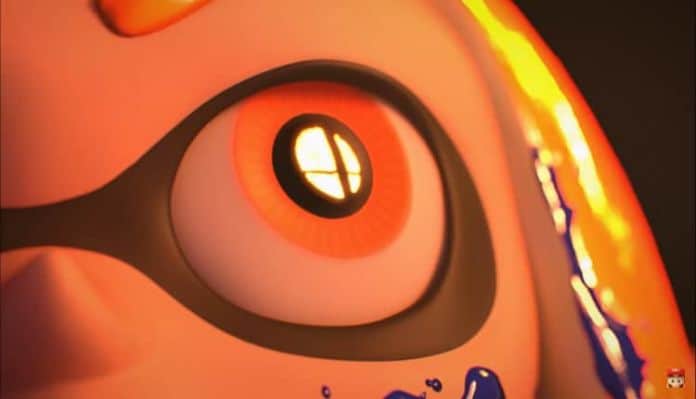 Nintendo nailed us with the infamous “one more thing” at the conclusion of today’s Nintendo Direct. And while it was semi-expected, it was still a doozy. Super Smash Bros. has been announced for the Nintendo Switch.

The unveiling came after an extended look at Splatoon 2’s upcoming premium story DLC. The game’s director, Seita Inoue, was joined by Nintendo President Tatsumi Kimishima to cement the announcement and conclude the Nintendo Direct. That’s when Kimishima says, “Well, actually, we have one more announcement…”

We then cut to another video of Splatoon’s male and female Inklings darting across a blank landscape as they fire ink at one another. The male vanishes into the distance as the landscape goes dark. The female is then halted by something behind her and she turns towards it.

A look of surprise hits her as her eyes blaze with an image Nintendo fans are sure to recognize – the engulfed Super Smash Bros. logo.

Shortly after, we catch a dark silhouette of Mario and what appears to be Breath of the Wild’s Link. Then, the Super Smash Bros. logo with a crowd of combatants in darkness standing below it.

Super Smash Bros. 2018. And that’s all the details we’re getting.

Super Smash Bros. for Switch will surely be a focal point of Nintendo’s E3 presence. But if we’re lucky, maybe we’ll see a bit more of the game before a complete blow out hits us in June.

Previous articleFallout Shower Curtain
Next articleZelda-Inspired Secret Passage Floor Decal
Jeff Scott
Growing up a 90's kid, Jeff found his love for gaming during Nintendo's heyday. Because of that, you could (perhaps sadly) call him a "Nintendo Fanboy" to this day.