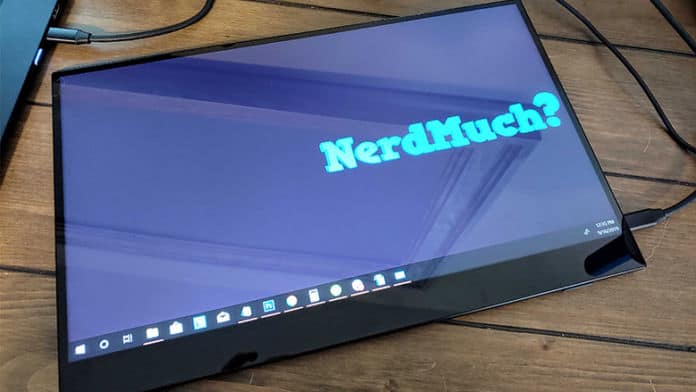 A LinQ Touch review unit was provided by Viotek.

I travel frequently – between all of the conventions I go to yearly, all of the traveling I have to do back and forth to the city for various meet-ups, and the everyday back-and-forth shuttling the kids to their various activities, it seems like I’m always on the go. And, for those who don’t know, my desktop setup at home is an absolute beast – great specs, a large desk, and, most importantly, three monitors so that I can get 3x the work done at once.

But when I’m on the go, I’m stuck with my laptop. And while it’s also an absolute beast (at least, as far as the specs are concerned), it’s still missing a key ingredient for productivity: the second screen. That was until I had a chance to check out the LinQ Touch from Viotek — and now, I’m never going to travel anywhere without it.

The LinQ Touch simply gets the portable screen “right” — it’s super lightweight and easy to carry, it doesn’t require an additional stand, and it has different cord options that are included right in the box (so, the chances are slim that it wouldn’t work with your laptop).

In fact, the LinQ Touch fits right into a standard 15.6″-ready laptop bag (I have this one and it fits perfectly WITH my laptop in the same bag). It weighs just under 2 pounds (1.7lbs for those keeping score at home), and it’s ultra-slim at just 9.4mm thick. 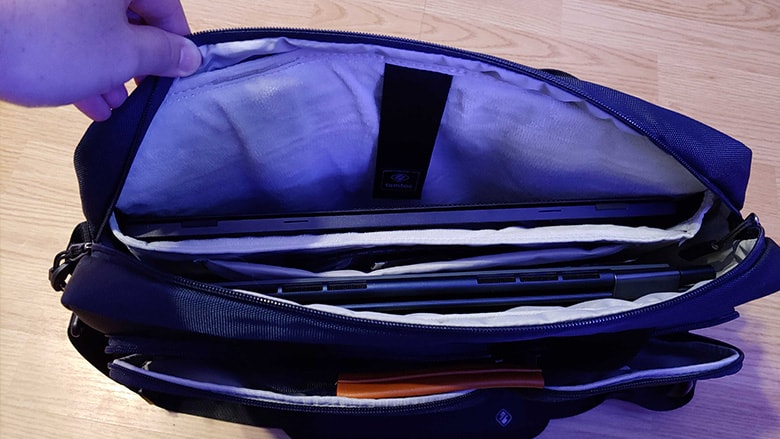 It’s also notably basic in its design – which is great because it’s often the case that monitors have logos and LED lights that can be distracting. Not with the LinQ Touch, though — it’s just a black screen with a black texturized cover/stand on the back.

As far as the screen and picture quality is concerned, the LinQ Touch is surprisingly bright and crisp. You can also adjust the brightness quickly with a button on the left side of the monitor for when you’re working in low light environments. It has a full 1920 x 1080 resolution, and your movies and games look great while in-motion. It has a good viewing angle as well, and AMD FreeSync for your gaming pleasure.

The real selling point here, for me at least, is how incredibly easy using the LinQ Touch actually was. I was honestly expecting it to be more of a hassle to get connected and running. But instead, it’s literally a plug-and-play monitor that just works well. I don’t need anything but the monitor and the plug, and I can have a second screen. Dope. 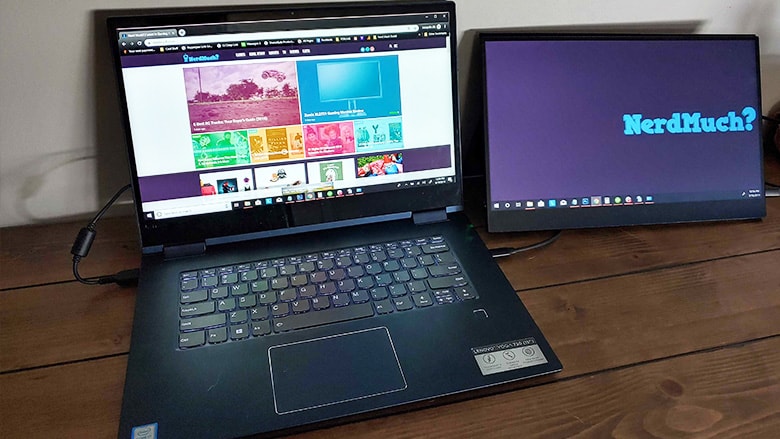 What’s the LinQ Good For?

For my purposes, I found a couple of super useful ways to utilize the LinQ Touch over the past month. First and foremost, it gave me the PERFECT travel setup when being holed-up in a hotel. Instead of being less productive with my typical single-screen laptop, I was able to get more done than usual, thanks to the added screen real estate the LinQ provided. It made image editing 10x easier!

Secondly, I also brought along my Xbox One X to get a little gaming in while watching football on Sunday afternoon. I had the game going on the hotel TV, and I had the Xbox One X plugged into the LinQ Touch so that I could do some loot hunting in Borderlands 3.

Thirdly, I actually used the LinQ Touch for a presentation I was giving to my staff of writers – showing them some sweet SEO slides on it while I was looking at virtual notecards on the other screen. It was fan-fucking-tastic – a huge help when giving the presentation, which otherwise would’ve consisted of me trying to remember everything I needed to say.

How to Connect the LinQ Touch to Your Laptop

So with my own personal laptop, I have a USB-C port that can be used to connect the LinQ Touch to my laptop. It’s simple because the right cord I needed was already included with the LinQ packaging. I plugged one end into my laptop’s port, and the other into the LinQ monitor and voila — as simple as that, I had a second screen ready to go.

Sometimes, we’ll get a product in to review that’s good but there’s not a ton else to say about it. But there’s something about the LinQ Touch that makes me want to literally tell all of my fellow tech geeks to get one. Seriously, it’s THAT good at what it’s meant to be used for. If you’ve read any of my other reviews in the past, you probably noticed that I don’t typically gush about products, only present their pros and cons. But the LinQ Touch is certainly gush worthy, and I can’t recommend it enough if you’re often stuck staring at a single screen laptop. It also has a certain coolness factor to it, and that’s just one of the many reasons it deserves the official Nerd Much? seal of approval. Certified Gold.