When it comes to the idea of modern technology taking over our world, Hollywood hasn’t been exactly shy at casting “the future” as a looming catastrophe. While most of the time this kind of horror takes the form of robots, evil A.I., and even the world ending weapons we can create, director James Ponsoldt takes a different route.

In The Circle, privacy and the lack thereof takes center stage as the all-encompassing problem that needs to be addressed. Even though other movies like Snowden have sought to address this issue, it’s an idea that is still very much a reality in our modern world. Despite the seemingly endless pool of sources, concepts, and ideas that Ponsoldt could draw from, he, instead, decides to focus on one simple idea: What if Google was evil? The problem, however, is that The Circle feels nothing short of disingenuous and misinformed on the entire concept.

Our story is set in San Francisco and follows a young, down on her luck girl named Mae (Emma Watson) who manages to nab a job at the hottest tech company, The Circle. Mae quickly excels at all her work and eventually begins to attract attention from all her co-workers due to an unfortunate turn of events. This allows her to meet the head of the company, Bailey (Tom Hanks), who tries to draw her deeper down the rabbit hole as The Circle attempts to remove privacy from everyone. Where the issues begin to crop up is that at no point does the story ever truly feel coherent, as it takes a number of turns that aren’t in line with both the characters and world they inhabit.

Entire supporting characters feel tossed aside as their respective stories are haphazardly scattered throughout the film’s nearly two-hour runtime. One of Mae’s friends, Annie (Karan Gillan), seems to have an interesting narrative building up around the pressures of working a high-end job and hope that affects one physically. Yet, an entire middle chunk of her story feels missing, as if the movie ran out of time and needed to starting removing entire parts of sub-stories out of the script. It’s frustrating because you can see nuggets of genuinely relevant topics that should be discussed, but these ideas are pushed aside because we need to make millennials look even more insufferable, apparently. 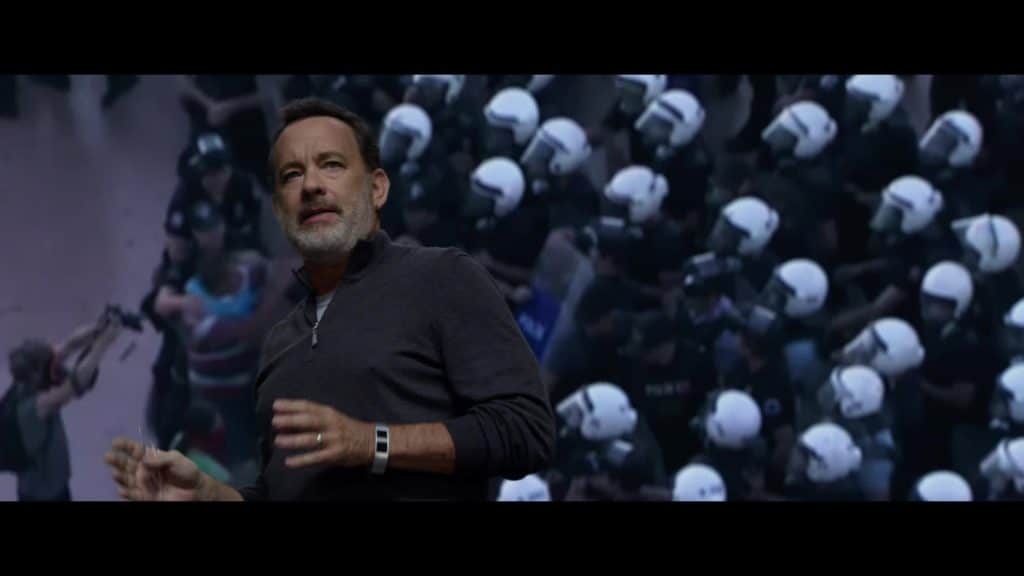 Speaking of, there are times where The Circle feels like it goes out of its way to make this generation look as thoughtless, self-indulgent, and detached as possible. It’s as if the characters are meant to be parodies of employees as Google or Facebook, however, the film tries to depict them as believable characters. This is representative of the larger problem, as every moment in The Circle is dripping with cynicism. Characters like Bailey don’t feel organic to the world, but more of a cartoonish version of what Steve Jobs would be like if he was the bad guy. This takes big set piece moments and diminishes them because Ponsoldt appears afraid to just have fun with the material.

Where things really go off the rails is with Mae and her weird, almost incoherent character arc. From the start, she is framed as a smart yet cautious girl who is not completely sold on the ideas of this tech company. Several scenes reflect this and it’s pretty much made clear to the audience that her trust and faith in this corporation are waning, especially after a specific moment early on. Yet, the character never follows through with these ideas and instead 180s out of the blue which is nothing short of jarring. There is no build up to this, call backs, or subtle hints that could indicate this is where the story is going. Instead, the audience is left with a lead character that has the beginning and ending to two very different storylines. It feels as if Ponsoldt couldn’t decide which narrative throughline he enjoyed more and just mashed them together.

That’s not to say Emma Watson doesn’t give a good performance, as she does well with the odd material given to her. In fact, pretty much all of the cast do exceptionally well in bringing these characters to life, but it’s all undermined by the poor script. You genuinely want to like these characters, but every moment makes it so damn hard that you will have already checked out by the time The Circle asks you to get emotionally invested.

When it comes down to it, The Circle is a poor attempt at portraying Silicon Valley and the people within it. At no moment do you ever care for these people or their well being, as they feel like caricatures of what people think millennials look and act like. Supplementing this are poor supporting characters and an ending that will leave you scratching your head in confusion. If you are looking for a movie to really dig at the heart of privacy in a digital age, this film just ends up going in circles.

Previous articleRidley Scott Says Alien 5 “Didn’t Evolve”
Next articleWhat Does It Take For A Game To Be ‘Good’?