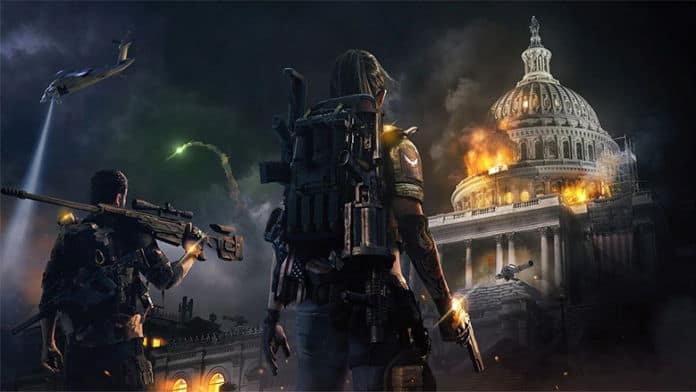 From the very first moments in Washington D.C. it felt familiar, like picking up a book to continue reading from the night before. The Division 2 is certainly the next chapter in the series regardless of having a prominent “2” at the end of the title. The Division 2 uses the original game as a perfect foundation to capture all of the features that players loved while building upon it with new features and planned content to keep us busy for the foreseeable future. The looter/shooter community is one with high expectations and after multiple disappointing releases, a deserved lack of compassion towards developers. Many other AAA games in this genre at launch were unstable, riddled with game breaking bugs, and most seemed to be unfinished or rushed games all pushed out just to make a profit.

The Division 2 came out swinging in defiance of this stereotype and threw the genre on its head. The game was (surprisingly) completely functioning at launch, offering players an almost overwhelming amount of content to experience while handing us deserving rewards every step of the way. The Division 2 provides the bright light at the end of a very dark tunnel that most gamers didn’t think that they would see again. 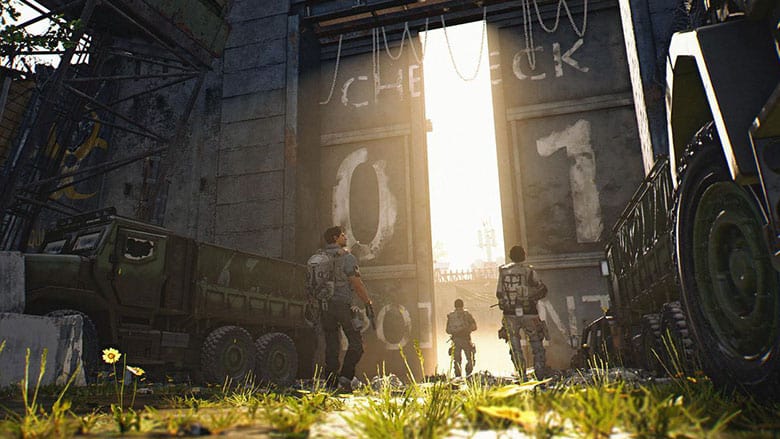 Emerging out of the tunnel and through that glorious white light, the game sets you on the task of taking back Washington D.C. from three enemy factions known as the Hyenas, the True Sons, and the Outcasts. Each faction is distinct from one another by not only looks but slight tactical differences and motives as well. During the early game, it’s the agent’s goal to take make their way to settlements strategically located on the map and help develop these into self-sustaining communities that can support the citizens that still remain in D.C. and to recruit the required specialists that can make this happen.

Once an agent arrives at a settlement for the first time and talks to an NPC, it opens up multiple main missions and side quests. These missions provide what is needed to progress the settlement as well as the means to become the agent you choose to become. Every mission will provide you with SHD tech (pronounced “Shade Tech”) and skill points which are vital resources to building your agent to your chosen play style.  SHD tech allows you to unlock perks which either provide passive bonuses or allow you to increase the capacity of carried resources such as ammo, food, water, etc.

Skill points allow the player to buy your “abilities” which come in the form of advanced technological weaponry such as a seeker grenade, stationary turret, chem launcher, ballistic shield, drone, hive, firefly,  and pulse. Each having multiple variations that can be selected and provide a plethora of benefits from different ways they attack, to crowd control or healing abilities. So, no matter which device you pick, you can still make your build fit your play style whether you want to be a DPS machine, bullet shield tank, or an always undervalued but much needed support/healer. The Division 2 gives so many avenues to create the build and play style that you desire, regardless of the abilities you decide you want to try. For the icing on this glorious cake that Ubisoft has baked with care, it dumps an insane amount of loot on top of you at every turn. 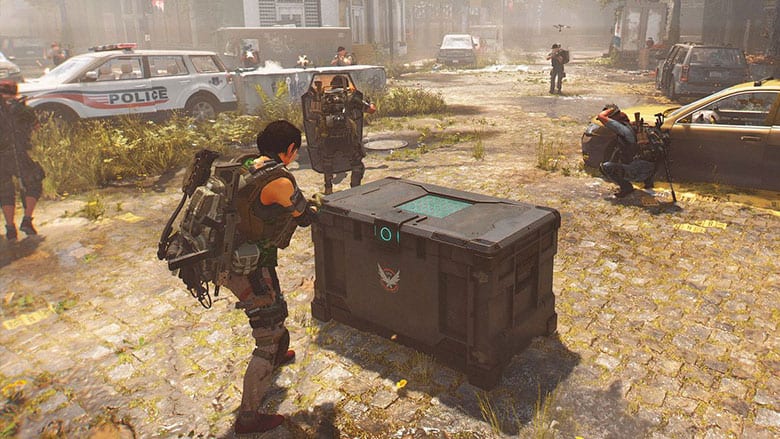 A looter shooter game that actually gives you loot? What a concept!

Every alleyway, back corner, open garage, underground sewer, construction site, or even an open field all contain luggage or loot crates that can be opened to provide anything from resources, vanity items, or weapons and armor. The amount of items that can be obtained in one session in D.C. is ridiculous — in a good way — which makes it even easier to fall in love with the Division 2.

At higher levels, armor and weapons drop with random perk rolls that can make each piece extremely valuable, giving players an endless grind to obtain that perfect piece that can make their build even that much better or hunt for the elusive “god roll.” Loot is at the very heart and soul of a looter/shooter, and the Division 2 gives us all that we have been begging and pleading for for so long.

[bs-quote quote=”Loot is at the very heart and soul of a looter/shooter, and the Division 2 gives us all that we have been begging and pleading for for so long.” style=”default” align=”center” color=”#1fb1e5″ author_name=”Jordan Harrington”][/bs-quote]

It’s this drive for loot that also pushes players to explore another beautiful and striking world that Ubisoft and Massive have built. It isn’t a shock that Ubisoft has done this; they are known for always painting magnificent environments with vivid colors and little details that make them come to life, and the Division 2 is no different. Making your way through the city, you can actually feel the enormous tragedy that took place there. Buildings left in rubble, broken down cars in the streets, civilians building makeshift farms on top of buildings, and rebel factions committing public executions in the streets.

Each zone of the environment is a remarkable portrayal of a city that experienced an apocalyptic event yet still fights to live and become the thriving metropolis that it once was. It’s extremely easy to find yourself in awe and roaming around for hours just to take in the sights. Even in this aspect, The Division 2 rewards the player with many different collectible items to find that give short snippets of information or lore, giving the world even more depth.

This all culminates in the endgame. Once the player reaches Level 30 and completes the main campaign missions, the Division 2 really comes alive. The entire map that you put dozens of hours into taking back from multiple enemy factions and completing missions resets to a new enemy’s control. The world is then set to World Tier 1, which means all activities and missions are set to a higher difficulty and reward higher loot. The new enemy faction is known as the Black Tusk and is far more advanced than the previous factions your agent has faced. The Black Tusk are much more technologically advanced, using new tactics and adding aggressive robotic war machines to their arsenal. They will now attack the control points you previously conquered and are posted in missions which significantly raises the difficulty.

Your new goal is to complete these missions and the strongholds located in a few of the zones on your map. Each stronghold has two to three objectives that have to be completed and a gear score that must be reached to be able to access the stronghold. Each stronghold plays as a dungeon or a longer mission that requires your group to work together and use some sort of mechanics to defeat. At the completion of each stronghold, the world increases in tier, from World Tier 1 ending currently in World Tier 4. Obviously, each tier has both an increased difficulty and more valuable rewards. All activities, missions, and strongholds can be repeated, and the player is encouraged to do so to acquire better weapons and armor to reach the gear score cap of 450. Ubisoft has also already laid out a roadmap for the entirety of year one with the next step of ending coming this Friday, April 5th which gives players World tier 5, a new stronghold called Tidal Basin, an increase in gear score, and gear sets with specific perks. 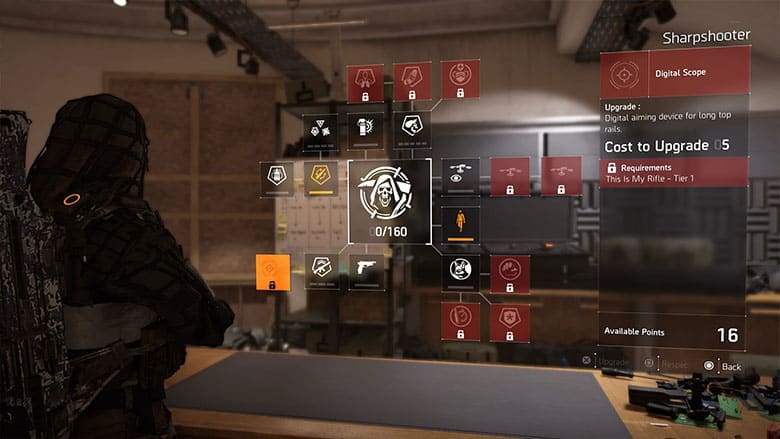 For the agent that has a thirst for blood and wants to test their skills against other players, the Dark Zone returns and a new mode called Conflict will be available. The Dark Zone features its iconic contaminated environment and will pin groups against each other to fight it out while gathering loot from NPCs and other players. Conflict features two modes called Skirmish and Domination and uses new maps not found in any other location in the game for each. Skirmish mode is a 4v4 deathmatch where each team has a set number of respawns and once these are depleted the last person standing on a team wins the round. Domination is objective-based and will require players to gain control of three designated locations and hold them to build their score. After spending time playing in the Dark Zone or Conflict players will be able to level up their rank in each PvP mode.

The Division 2 is exceptional and provides the example that other titles in the genre should follow especially at launch. Massive’s entire dev team needs to be commended for how their title launched with such few hiccups, especially when compared to other similar titles such as Year 1 Destiny 2 and new poster child for terrible launches Anthem. The Division 2 offers so much to the die hard looter/shooter community while welcoming newcomers alike with straight forward mechanics and valuable rewards. This title is what we all have been waiting for and effortlessly sets a new bar for the looter/shooter genre. Let us all take part in a long overdue slow clap for Ubisoft and Massive Entertainment for listening to what its players wanted and creating a world we all can spend countless hours gunning down our foes and drowning in loot.

Previous articleLego Iron Man Hall of Armor Set Highlights 5 Iconic Suits
Next article20 Best Superhero Watches for Adults (2020)
Jordan Harrington
Jordan loves him some Destiny. He’s a recovered World of Warcraft addict looking for the next big MMO. And, pretty much, everything since WoW has failed him.